CHRB Unanimously Votes To Limit Whip To Use For Safety Only 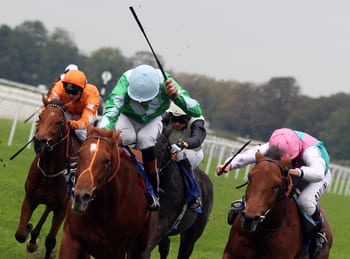 The California Horse Racing Board voted unanimously Thursday to approve a rule which will make whip use inappropriate “except when necessary to control the horse for safety of the horse or rider.”

Jockeys in violation of this rule could face fines, suspensions, or loss of purse, though stewards would not change order of finish on horses whose riders violate the rule, to avoid punishing bettors for violations. The rule will also apply to exercise riders.

Following the vote, the CHRB will open a 45-day public comment period on the new rule, per state law before the rule can move to the next part of the regulatory process.

Various industry and non-industry groups offered public comment ahead of the vote. The Jockeys' Guild sent representatives Terry Meyocks and Tom Kennedy to present its membership's viewpoint on the proposed rule. Kennedy pointed out that restricting use of the whip to safety corrections only would put Santa Anita out of touch with international regulations, which could prove problematic at Breeders' Cup time.

“In 2011, the British Horseracing Authority released a document … which describes the appropriate use of the whip to be 'for safety, correction, and encouragement,' and that is the position of the Guild — that correction and encouragement are equally important aspects of why the crop is an important element in racing equipment. None of that is included in the materials before you,” Kennedy said.

Kennedy also asserted that the whip was not a contributing factor to Santa Anita's breakdowns, a point that CHRB chairman Chuck Winner challenged him on.

“First of all, you said you know for sure that the crop had nothing to do with any of the fatalities at Santa Anita. We don't know that for sure. If you watch some of the tapes, horses that went down in some cases the crop was being, in my view, overused and could have contributed. I'm not saying it did contribute, but it could have,” said Winner.

“We're at a critical time in racing in California and it breaks my heart,” said Solis. “If we don't have racing, what are we going to do with the whips? You're talking about the future of California racing so I feel like we have to compromise one way or another.”

The People for Ethical Treatment of Animal's Kathy Guillermo echoed Winner's sentiments, and The Stronach Group's Belinda Stronach agreed, pointing out that the whip is often referred to as the “crop” to make it sound less violent — an unspoken acknowledgment of the way the public perceives its use. Responding to a question from the board, Stronach also indicated track ownership may also pursue changes to whip rules at its other facilities, but wants to get it implemented in California first before tackling the issue in other jurisdictions.

Kennedy and Meyocks suggested that the board delay voting until the Guild could come up with research into whip use, and also stated the Guild's interest in starting a public education campaign to show racegoers how cushion crops work to avoid inflicting pain on horses compared to older whips. Fred Maas pointed out that this had been discussed some years ago, and the window during which it made sense to invest in educating the public rather than restricting usage has passed.

“To put this perception issue into focus, I'd like to pose to you what was posed to me: if your child was hit by a riding crop in school and you went in to see the principal and you asked the principal what happened and he said 'Well it was a rounded crop and it was soft and there were no welts or bruises but we needed it for control or discipline' how would you feel?” said Maas. “Would you want to establish a committee of teachers and principals and take some time? Explain how I respond to someone who approaches me with that question.”

“I don't think it's a well-drawn parallel between children in school and horses,” began Kennedy.

“I believe the public does,” interrupted Maas.

The new rule will not go into effect immediately; after the 45-day public comment period, it will be considered again by the board before being forwarded on to California's Office of Administrative Law so it could be some time before any changes are implemented at California tracks.

Also at Thursday's meeting, the CHRB voted unanimously to approve a contract between The Stronach Group and Thoroughbred Owners of California to reduce pre-race furosemide from 10 ccs a dose to 5 ccs. That change will go into effect immediately, ahead of Friday's reopening of Santa Anita. Additionally, the board voted unanimously to approve a ban on race-day anti-inflammatories — a change that will also be effective immediately.