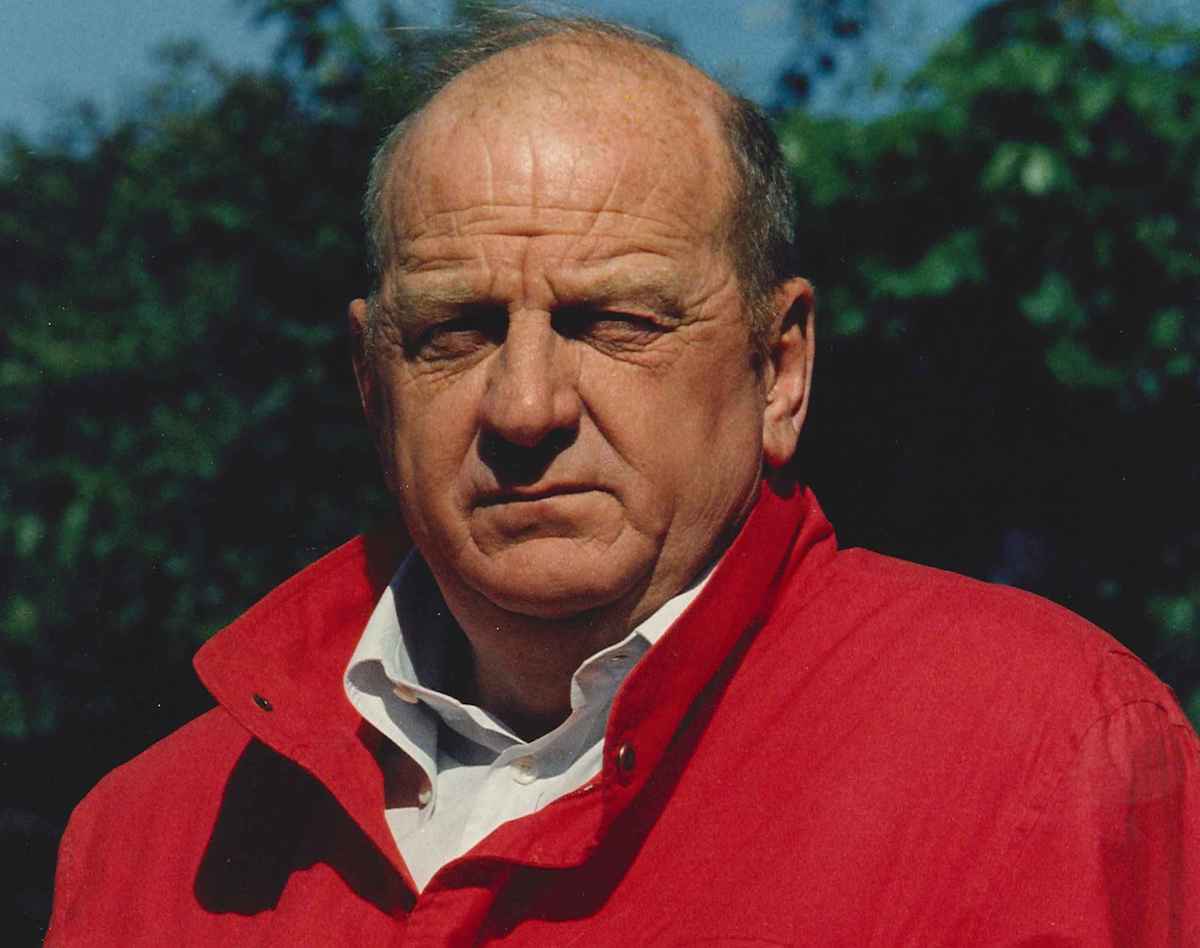 Last Monday, Jan. 8, 2018, Caruth-Hale Funeral Home in Hot Springs, Ark., opened its doors to a steady flow of family and friends of John Charles “Jack” Van Berg. The reception area was filled with JVB photos, mementos and a looping video slide show. At the opposite end of the room there was a grim reminder of the reason for the gathering.

At 2 p.m. that afternoon in the Hot Springs Convention Center, Oaklawn Park Chaplain Rich Heffington began proceedings with a welcome and a prayer of sympathy for the Van Berg family. On a stage with a beautifully stained, ruff-hewn casket surrounded by stunning flowers, large scale photos, art and a backdrop of purple and gold draping, Chaplain Rich introduced Sally Simpson, who sweetly sang and strummed “Amazing Grace” – as requested by Jack. What ensued was a memorial service that was one for the ages, for a man who was also one for the ages – our Jack.

Years ago, Jack said to track announcer Frank Mirahmadi, “When they put me in a box I want you up there talking about me.” Frank did not let Jack down, nor did he disappoint the nearly 400 guests at the service. To no surprise, Frank concocted the perfect elixir of reverence and levity, which his audience savored – and I'm sure JVB did, too. He was not excessive (though he could have been) in the listing of Jack's countless accomplishments as a trainer. Through his meaningful research, Frank infused many quotes and anecdotes of Jack's adoring friends, employees and colleagues.

Nancy Ury-Holthus, the paddock host at Oaklawn Park, then stepped up to the microphone and unveiled her recollections and emotions of living half-a-lifetime in the wave of Jack Van Berg. Her unwavering love for Jack was heard, seen and felt in a tribute that was punctuated by her tears and the tears of those who listened. She also read a letter written by horseman Mike Puhich, one of Jack's pallbearers who couldn't bare to publicly express himself. Mike shared how he felt special because Jack took him under his wing to offer guidance and routinely look after him. And how he quickly realized that he wasn't so special after all, when he saw how Jack took hundreds of others under his wing and did the same thing with them. Mike wrote that Jack inspired him to look adversity in the face and meet it head on. Nancy spoke Mike's words, and together, they were special.

I was asked to speak next and was purposefully brief, having already written a 40-chapter tribute to Jack, the biography “JACK, From Grit To Glory.” I spoke of how incredibly gratifying the book signing tour was for both Jack and me. We both learned how the majority of people who approached the table had their own Van Berg story they wanted to share, be it of working for Jack, his father Marion or a special VB horse. I recognized that the guests at the memorial service could likely contribute 400 new chapters to another book and I encouraged them to maintain their memories of Jack, by sharing their memories of him.

Jack Van Berg with his father, Marion, who preceded him into the National Museum of Racing Hall of Fame in 1970

Guests were then invited to the stage to share any tribute they would like. Dr. Mike Karlin, DVM, son of Dr. Dick Karlin, DVM (Jack's nephew), marched up and told his story. After spending a summer vacation with his Uncle Jack at Hollywood Park, Jack drove Mike to the airport. At the LAX airport curbside, Mike was crying, sad to leave the man who had become his hero; when Jack noticed the tears, he flipped-open his phone, called Dick and simply barked, “He's staying another week.” He then flipped-closed his phone and the two returned back to the track together.

At a moment of much-needed cheer, Hall of Fame Jockey Chris McCarron strode up to the mic, and introduced himself perfectly by exclaiming – “I rode Alysheba!” Everyone laughed and we were reminded that Jack also wanted light-hearted stories to be told of him. As always, Jack got his way. Eloquent as ever, Chris carried on with more and he passed the reins to Hall of Famer Gary Stevens, who continued by heaping praise on Jack as a horsemen and a hero.

Frank Lyons is a Grade 1 storyteller, but the grip Jack has on Frank's heart reached up and choked the Irishman and his brogue. No worries Frankie. Your greatest tribute to your dear friend was issued three years ago when you named your newborn son Jack.

In a New Orleans Yat accent, Wayne Keller told his stories from the Fair Grounds. Roger Clinton (brother of the 42nd U.S. president) showered stories of his experiences with Jack while he rained down tears of grief and laughter; many guests did the same. Billy Gowan hasn't stopped wearing his I'm just damn glad to know Jack Van Berg smile. When he had Ride On Curlin on the road to the 2014 Kentucky Derby, he proudly spewed stories into the media mill of working under JVB. Bruce Simpson wasted no time getting to and from the mic. His remembrances were appreciated, but his purple velvet sport coat might be remembered most.

Stephen Grey, otherwise known as “Chief” in Hollywood Park racing circles, traded punches for decades with the often impish Jack Van Berg. He referred to Jack as an “Urban Grizzly Bear” in his endearing tribute. 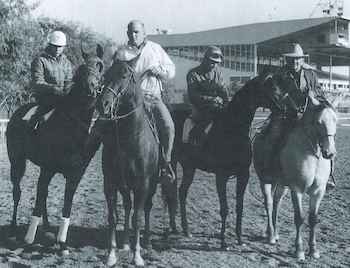 Jack and his father at Detroit Race Course

Brian Lynch is part horse trainer, part comedian – and pure Aussie. He mesmerized the audience with his humor and cherished memories of Jack. His account of Jack winning a Pick 6 at Hollywood Park must never be told in a condensed version. He also shared how he saw Jack quiet a baby in a restaurant with a martini olive. See Brian for all the details.

Appolos Coleman, with the polish of an international statesman, articulated his tribute to Jack with impeccable composure. He confessed that he had dreams of becoming the first Black trainer to win the Triple Crown, until his mother reminded him that he was allergic to horses. Yet there was no keeping Appolos from Jack and vice-versa. The two have been inseparable since Jack arrived in California. In a compelling act of belief and encouragement, Appolos untied his perfect purple and gold necktie, stepped off the stage, gave it to Jack's son Tom, and told him he wanted to see him wear it when he trained a Triple Crown winner.

Nancy Toombs-Smith galloped horses for Jack in Kentucky in 1976, the year they won 496 races. When she asked Jack for a raise he agreed, but only if she would get her high school diploma. She humbled us all when she struggled to express her immense, passionate gratitude for how Jack has shaped her life. Nancy is not alone.

The night before the memorial service Jerry Caroom hosted a few out-of-town guests at his house. I call Jerry “The Angel at 35,000 Feet.” In 2014, the Racing Gods seated Jerry next to Jack on a flight from California and the next day he purchased his first of many horses. Jerry helped the JVB purple and gold colors fly again and piloted his own plane to take Jack and Liza to scheduled and emergency trips to the hospital. Jerry was a pallbearer, as was: Lyons, Lynch, Coleman, Gowan, Puhich, Dr. Richard Karlin DVM, Bill “Spanky” Essay, Mike Waters, Leroy Bowman, Joe Petalino, Sammy Almaraz and myself.

The service ended with a poignant slideshow of miscellaneous photos depicting eight decades of JVB that captivated everyone's attention. The accompanying music to the presentation included songs written and sung by Liza G. Fly. Jack's dear Liza preceded him in death in 2016 and took a big hunk of his heart when she did.

After a brief graveside service, there was a meal for invited family and guests at the Oaklawn Park backside chapel. Hall of Fame Trainer Bill Mott, who was one of Jack's first assistant trainers, was at the morning visitation at the funeral home, the convention center service and at the chapel wake. Bill quietly showed his support for the Van Berg family and visited with many old friends. Hall of Fame Trainer Neil Drysdale was also present and remarked, “The day was a great celebration of Jack's life.”

The morning after a memorable day, Wayne Lukas said “Hi Chris” as he rode by me on his pony leading a horse to the track. A few strides later, he turned, rode back to me and said, “That was an incredible service yesterday.” I thanked him, agreed and assured him that the Van Berg family and friends, Caruth-Hale Funeral Home and specifically Nancy Ury-Holthus were responsible. Nancy hosted a number of Dawn At Oaklawn programs with Jack that are now on Youtube; they should be in Fort Knox. I prescribe you to refer to them whenever you need a dose of JVB. That, and a few chapters of his book.

With Chris Kotulak, author of “JACK, From Grit to Glory”

Jack is immortalized for the accomplishments of his horses on the racetrack; however, he can assuredly be honored by the achievements of those whom he mentored. Beyond his direct lessons of horse sense, countless people can sing Jack's praise for how he influenced their lives in his special unsung style. You always heard Jack's voice but his lifetime of positive actions can speak for themselves. Jack Van Berg may have had a more comfortable life had he not created so much work for himself – and those around him. Instead, he chose to do things in a big way; and he typically succeeded. He perpetually wanted to share the gift of benevolence and horsemanship his father, Marion, gave to him; he succeeded in that, too.

Many have bristled from Jack's roar, yet melted from his tender tones. May our memories of the JVB Way whisper to us and guide us eternally along our own way. Thank you, Jack; thank you for sharing. We miss you already.

Christopher Kotulak is a Remington Park handicapper and television host and author of the Jack Van Berg biography: “JACK, From Grit To Glory, A Lifetime of Mentoring, Dedication and Perseverance.” The book is available on Amazon and jackfromgrittoglory.com