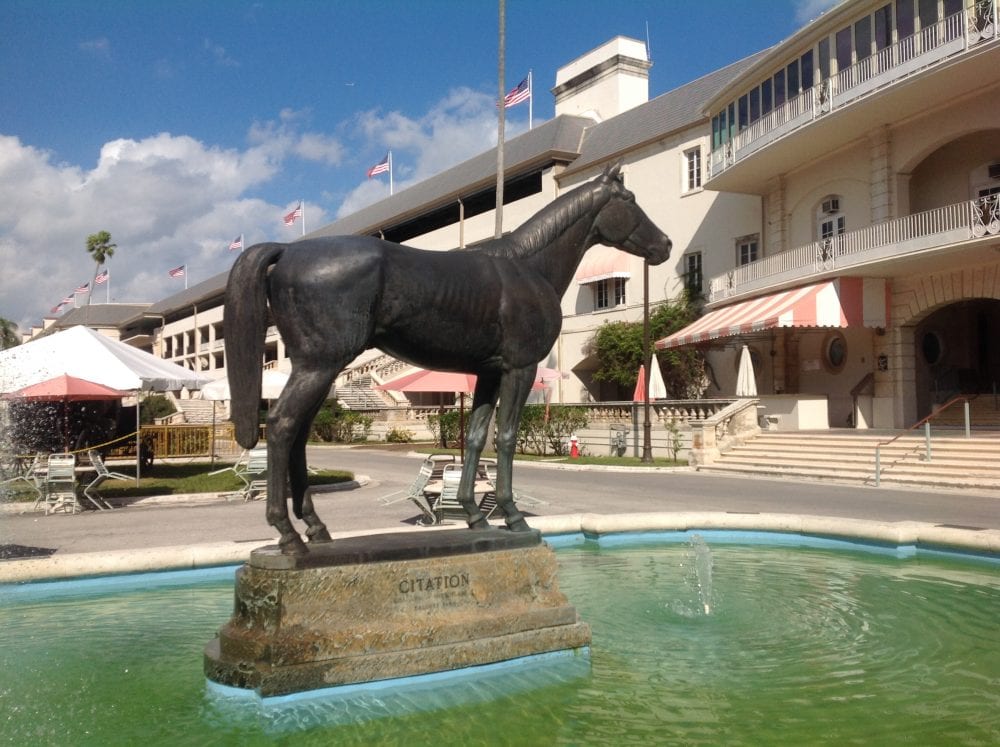 Hialeah Park currently has a Quarter Horse permit but could a deal be struck for Thoroughbred racing to return?

Tired of hearing about “fake” news?

Well, for a change of pace, get ready for some “fake” horse racing at Hialeah Park, a South Florida track that once was synonymous with class and elegance in Thoroughbred racing.

It is soon to be home of fake horse racing, the kind that allowed some slick businessmen to get licensed for card rooms and simulcasting in several central and north Florida counties. If the Florida Supreme Court rules in their favor in a case that's been in front of the court for nearly a year, they'll get slot machines, too.

Hialeah Park already has slot machines, a card room and simulcasting. Since 2009, it has operated a traditional Quarter Horse meet during the winter months by way of a contract with the Florida Quarter Horse Racing Association, which has some 600 members, 535 of whom participated during the 2015-16 live meeting. Operating a live meet gives Hialeah Park the right to have simulcasting, a card room and slot machines. Its casino does pretty well from a financial standpoint.

But Hialeah Park, taking a page from Gretna Racing, Hamilton Downs and Oxford Downs – three “racetracks” whose “races” do not in any way resemble what most people would recognize as horse races – has set up a contractual arrangement with a “horsemen's organization” it controls.


The Department of Business and Professional Regulation's Division of Pari-Mutuel Wagering signed off on the new contract between Hialeah Park and the “horsemen” and an administrative law judge last week denied a challenge from the Florida Quarter Horse Racing Association that the whole thing was a sham.

We've written about these farcical races and tracks before, here, here and here.

What it comes down to is this: The Division of Pari-Mutuel Wagering is okay licensing a business as a racetrack (and card room and simulcast center) if it (1) has horses that move from Point A to Point B and (2) there is a contract between the track owner and the people who own the horses, fulfilling the track owner's commitment to the state to operate X number of “performances” (that's the word the division uses for race cards) during the fiscal year.

Gretna in the Florida panhandle is licensed to have flag drop races after a legal ruling said barrel racing wasn't really horse racing. Oxford Downs – adjacent to the massive The Villages retirement community just south of Ocala – had two horses come out of a starting gate and jog for a hundred yards or so to qualify for their license. Hamilton Downs, according to an administrative law judge who approved its license, has two horses amble down a dirt path so slowly a sundial could be used to time them.

The South Florida Quarter Horse Association, which now has a binding contract with Hialeah Park, has no known members. Wesley Cox and Cindy Gramling (who apparently comprise the horsemen's association that contracts with Gretna Racing), were said to be officers of the SFQHA but both resigned from the organization last August.

That makes my head spin. It is a dangerous precedent that trashes, as the administrative law judge wrote, the “legislative intent” for actual horse racing to benefit from additional forms of gambling and for “the need for an independent horsemen's association.”

However, he also wrote, “The Division (of Pari-Mutuel Wagering) argues that the statutes give it no authority to determine which is a 'legitimate' and which is a 'sham' or 'puppet' horsemen's association. The Division's position is that if it has on file a facially valid and binding horsemen's agreement, the Division lacks any statutory ground not to issue the license.”

I've learned to never say never when it comes to Hialeah Park and its owner, John Brunetti, but right now it looks as though the grand old racetrack may have run its last, legitimate horse race.