Dr. Jekyll and Mr. Shockwave: Two Sides of a Therapy 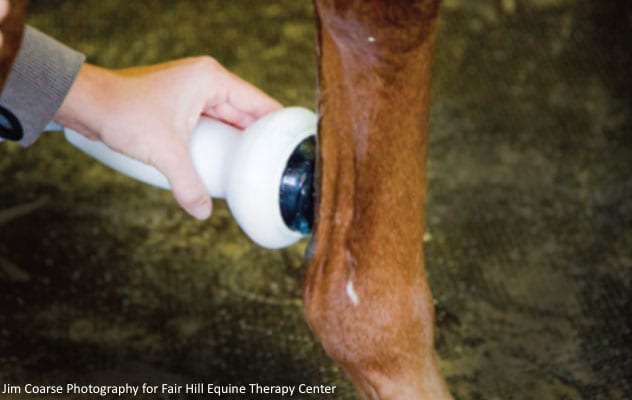 “Shockwave therapy” doesn't sound like the friendliest of ways to treat an injury (some people mistakenly think it involves electric shocks). The treatment may not be as prickly as its name implies, but like so many other veterinary technologies, the treatment can be used with good or ill intent, depending upon its application. Much racing industry press has focused on inappropriate uses of the treatment, but experts say an accurate representation of the therapy is not black and white.

The treatment consists of transmitting short, high energy pressure pulses to a select area of the body through a hand-held probe. The operator may choose different levels of energy depending upon the purpose of the therapy. The machine makes a loud, rhythmic cracking sound as it operates.

In the grand scheme of medical technologies, shockwave therapy is fairly new—new enough that scientists aren't sure exactly what it is about the process that works. Dr. Scott McClure, associate professor in equine surgery at Iowa State University, said it's believed the energy waves stimulate growth in the cells treated, jump-starting the healing process of any nearby injuries.

Currently, the therapy is approved by the FDA for use with plantar fasciitis and tennis elbow in humans. McClure said it has also proved helpful for breaking up kidney stones, and current studies are underway to test its efficacy on slow-healing skin wounds in diabetic patients and in treating cardiac issues after a heart attack.

“The legitimate uses of this technology are huge. In the equine side of things, it's been heavily used with a lot of positive outcomes,” he said.


In horses, the therapy is often used to address orthopedic problems, especially tendon or ligament issues. Although people who have experienced shockwave say the energy pulses are extremely painful, McClure said that most horses he has treated are content to stand for the procedure without any sort of anesthetic, although they do usually receive a mild sedative to keep them still.

Additional treatments often include reduced exercise or rest, and the use of platelet-rich plasma or stem cell therapies is a useful boost for major ligament or tendon injuries.

For the veterinary patient, shockwave can increase healing but it has a side effect that can prove useful for those looking to skip the healing process: shockwave treatments can act as on-site analgesia in the area where energy waves are targeted. Scientists don't know for certain how long that pain relief lasts, but it's generally thought to be about 48 to 72 hours. That may make the therapy an attractive band-aid for cheaters.

“Part of the concern is we've got regulations addressing its use, but they're virtually unenforceable,” said Dr. Mary Scollay, equine medical director of the Kentucky Horse Racing Commission.

Scollay estimates that the analgesia is strong enough to successfully mask certain types of fractures in the cannon bones for the first two to three days after treatment.

“I was speaking with a practicing veterinarian just a couple of days ago who is considering purchasing a machine. He doesn't have one … he said he figures he's lost about $10,000 worth of business in the last six months,” she said. “It sounds like the honor system isn't working very well.”

RMTC guidelines suggest trainers be required to report the use of shockwave on a horse to racing officials, who should put the horse on the veterinarian's list for ten days after treatment. While this regulation has been enacted in many states, Scollay strongly suspects the therapy's use is underreported: she noted in early July that there were four treatment reports for the Churchill Downs meet, which ran April 26 to June 29. Use of a shockwave machine is hard to catch: regulators don't have the authority to mandate reporting for treatments that take place away from a racetrack or licensed training center, and they don't have legal standing to monitor treatments on property outside of those licensed facilities. In June 2013, a Louisville Courier-Journal report stated that shockwave treatments can take place anywhere, including “the Wendy's parking lot.” 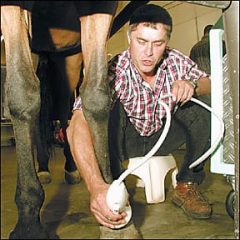 As a result, it's also unknown how many breakdowns, if any, correlate to the misuse of shockwave therapy. What's more, it would be easy for a lay person to try to use a shockwave machine.

“The part that requires professional effort is associated with making an accurate diagnosis … and then identifying a valid treatment. If shockwave is a valid treatment, it's not complicated to do,” said McClure.

Many jurisdictions require that machines in use on the track be registered with the state racing commission and possessed only by licensed practitioners, but it's unknown whether trainers could flout the requirement and acquire a machine themselves.

McClure said shockwave does not use radiation, so the good news is that the treatment itself does not pose an inherent risk to animals and humans—but the trainer's management of the horse afterwards could increase the risk for further damage to an injury.

Scollay said one veterinarian has taken to adding local anesthetic at the spot receiving shockwave therapy to safeguard against trainers running the horse too soon after treatment. The anesthetic isn't usually necessary for the procedure, but it will show up in a post-race drug test.

Researchers are hoping to develop a blood test to detect recent shockwave therapy use, but because scientists' understanding of the therapy's healing process is still evolving, detecting its changes in the body is, too.

“We're trying to identify anything that could serve as a marker that the horse has had shockwave,” said Dr. Mary Robinson, co-director of the Equine Pharmacology Laboratory at Penn Vet's New Bolton Center. “There are several types of markers you can look for that could indicate that shockwave has been given. We've got people who are looking at protein-based markers, RNA-based markers, and we're now starting to look at lipid-based markers.”

Robinson called the results of her studies “promising,” but said it's hard to know how far off an accurate blood test is—the understanding of lipids, RNA, and proteins as markers of injury in the horse is still in its early days. To further complicate matters, scientists must first determine what levels of the markers could arise from the injury itself without the influence of shockwave.

In the meantime, regulating the therapy remains as challenging as ever.

“It's kind of a complex issue; we don't necessarily want to ban its use because it has legitimate therapeutic use, and the other concern is that when you ban something you give it a cache and require it to go underground,” said Scollay. “Then you really can't know how it's being used or how often it's being used. Fair regulation is much better than just forbidding it.”