‘A Renewed Faith In Humanity’: Turf Paradise Horsemen Pull Together To Feed Horses 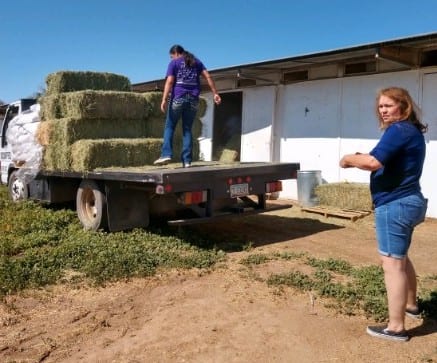 It's hard to find a bright spot in the COVID-19 crisis, but trainer Cynthia George says the racing community at Turf Paradise has provided it for her.

Horsemen at Turf Paradise have been in a state of limbo since the track halted live racing more than a month ago on March 10. As many feared, a prolonged period of no income is taking its toll on small training operations — especially those where trainers own many of the horses themselves and don't have an owner to help offset day-to-day expenses.

“I'm originally from a small town that's been from disaster – Ferndale, Calif,” said George. “In 1992 we had three major earthquakes — Red Cross, full-blown disaster area — and if it wasn't for volunteer fire departments and everybody helping everyone it would have been way more detrimental than what it was. That's where I come from, is this small-town mentality.

“I thought, I know there's a lot of owner/trainers out there who do things themselves. A lot of people have multiple jobs here.”

George posted on Facebook to gauge the need for a feed assistance program and received some messages privately. Teri Ferguson, whose husband Chad trains at the track, offered to help organize. George and Ferguson dubbed their efforts the “Turf Paradise Race Horse Feed Angels.” The pair are taking donations through GoFundMe or directly through the two feed stores that supply the backstretch.

“You just can't imagine the support,” said George. “We're getting donations daily. One of the very first donations we had was a pony girl who purchased two bales of hay to donate. It started out small, and the next thing I know I'm getting a message from one of the feed companies, 'Hey we just received a $500 donation.'”

As of late Tuesday, the GoFundMe page was over $2,000 but George said the impact with direct donations to the feed stores has been far greater. Since the start of the project roughly two weeks ago, George and Ferguson have helped distribute 130 bales of alfalfa hay and 100 88-pound bags of oats, with a total estimated value of $4,500. Horsemen who can't donate have offered to pick up and distribute feed three to four times per week. One of the feed stores donated the use of a delivery truck and driver to speed the process on a recent weekend.

“There is a need. People are struggling. There's just no income,” said George. “We're just trying to alleviate some of the pressure, so what money they have left they can pay their gallop person or pony person. And it takes some of the pressure off the feed stores because we are supporting them as part of our local horse racing community.”

George is a lifelong equestrian who fell in love with racing through the Humboldt County Fair. Despite having no family connection to racing, she immediately began making her career in the sport, doing a little bit of everything to stay afloat.

Horsemen at Turf Paradise are permitted to stay in place and train through at least April 30. Many are planning to ship to Arapahoe Park, which is still scheduled to open its backstretch later this month. George worries about where some of her fellow horsemen will go — and whether there will be feed assistance for them wherever they end up, if the horsemen and track don't negotiate another contract to keep them in place at Turf Paradise.

In the meantime, she said she has been touched by the response of the backstretch. Despite being competitors, she says many people who reach out to her are directing her to someone in a neighboring barn who may need help — or offering to give up their feed to someone who may need it even more. So often, she will show up with hay and a trainer will ask her to drop a couple of bales in a colleague's shedrow.

“I have a whole renewed faith in humanity,” she said.