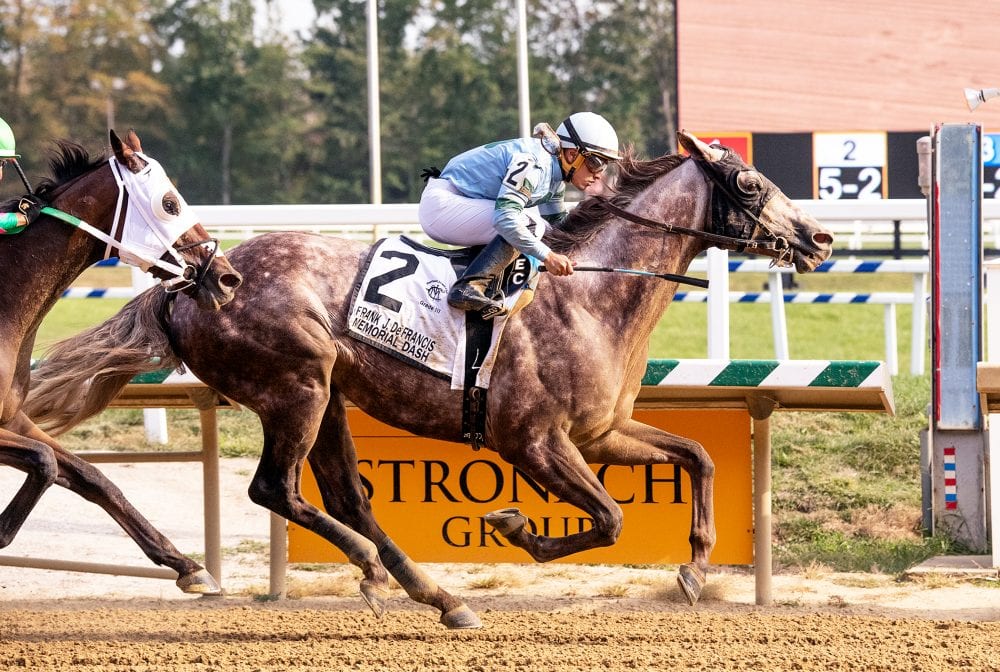 Being unable to attend the first graded-stakes win by one of his own horses in more than four years didn't make the accomplishment any less exciting for trainer John Terranova.

Terranova and his wife and assistant, Tonja, were about 900 miles away from Laurel Park in Wisconsin, visiting their eldest daughter, Paulina, a college freshman, as Killybegs Captain captured the $250,000 Xpressbet Frank J. De Francis Memorial Dash (G3) in one of its fastest editions ever.

It was the first career graded score for Killybegs Captain, who had been Grade 1 and Grade 2-placed this summer and upset Imperial Hint to win the Pelican Stakes at Tampa Bay Downs over the winter. It was Terranova's first since El Kabeir swept the Jerome and Gotham respectively in January and March of 2015.

“We couldn't be there but we were able to watch it. We were thrilled to win,” Terranova said. “I'm glad it worked out and we were able to ship down. Everybody did a great job, and he was doing really well.”

Long-time friends with Hall of Fame trainer Bob Baffert dating back to time spent in California, the Terranovas have made their New York-based stable a home away from home for such horses as Triple Crown champions American Pharoah and Justify.

Killybegs Captain, meanwhile, had rarely ventured outside of New York, making 19 of his 24 starts in the Empire State including a third in both the John A. Nerud (G2) July 6 at Belmont and Forego (G1) Aug. 24 at Saratoga.

“We took on Grade 1 horses up in Saratoga in his previous start, and we were looking for a spot that maybe he'd have a little bit better shot of winning,” Terranova said. “He always seems to show up. He's been really consistent this year and held his form, and just gotten to a different level.”

In the De Francis, Killybegs Captain was unhurried early but moved into contention on the turn, took command at the eighth pole and drew off to win by three-quarters of a length in 1:08.10 for six furlongs – the fastest De Francis since Richter Scale set the track record of 1:07.95 winning the race in 2000.

“He's perfect. He's so easy and versatile. He's got speed, but he can sit back off horses and finish, whatever it takes. Inside or outside, he's been pretty versatile in that way. He's just a fun horse to have, and we feel fortunate that we have him and that he's healthy,” Terranova said. “He looks great. He came out of the race really well, happy, healthy sound, and already back to the track and feeling good.”

Killybegs Captain is likely to stay in New York for his next start, possibly in the seven-furlong Bold Ruler (G3) Oct. 26 at Belmont.

“We'll probably take a look at it,” Terranova said. “It's kind of uncertain. We'll get on a couple weeks from now and figure out what he tells us. Logically, that could be the spot.”