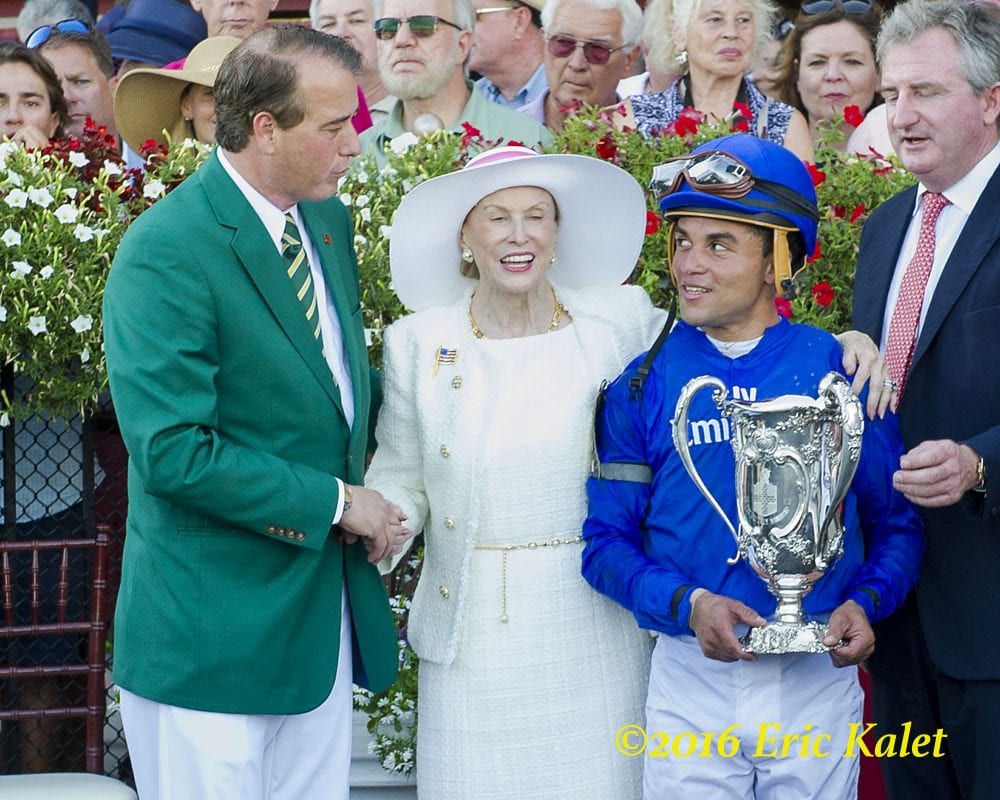 During the annual Racing Hall of Fame induction ceremony, the first row of the Fasig-Tipton pavilion in Saratoga Springs, N.Y. is typically reserved for honorees accepting plaques on behalf of their horses or slipping on the trademark navy jackets.

On Friday, the front row seat next to John Hendrickson held a vase with a single pink rose.

For many in the packed house, the induction of Marylou Whitney as a Pillar of the Turf was an emotional moment, one that evoked a standing ovation from the crowd, which filled every seat in the pavilion. Hendrickson brought a bloom from the variety of tea rose named for his late wife “so she would be here with us in spirit.”

Whitney died July 19 at the age of 93. She had learned she had been inducted into the Hall earlier this year when the official announcement was made in the spring.

“Thank you for giving Marylou the highest honor in racing. She was extremely honored when she heard the news,” said Hendrickson. “She told me she wanted to dedicate her induction to the horses and the people that love them, especially the unsung heroes – the backstretch workers. She said that horse racing gave her the most incredible life, and she was grateful. I want to thank all of you for loving Marylou. She loved the sport and all of you with all her heart.

“Let us not cry because it's over, let's smile because it happened.”

Whitney is credited with revitalizing Saratoga and making it the summertime place to be for any race fan on the East Coast. After the death of her second husband, C.V. Whitney, she reassembled the bloodstock he had built and bred champion Bird Town and classic winner Birdstone. Her legacy includes the Saratoga Hospital, Saratoga Performing Arts Center, National Museum of Dance and National Museum of Racing and Hall of Fame were all made possible because of her support.

“I was very lucky to train this mare,” said Bill Mott, trainer of three-time Eclipse Award winner Royal Delta. “After we won the Breeders' Cup with her when she was a 3-year-old I was crying like a baby going to the van with her because she was on her way to the sale. I was so lucky two days later to meet Mr. Leon after the sale and he gave me a call, asking if I would take her back. It was not a tough decision. She rewarded us with two more championship seasons.”

The recognition was a long time coming for Perret, who had been on the Hall of Fame ballot 12 times before the Hall announced his induction this year. Perret won the Kentucky Derby in 1990 with Unbridled, two editions of the Queen's Plate, the 1987 Belmont, and 1976 Travers. He was awarded the Eclipse Award for Outstanding Jokey in 1990, a year in which he won 31 graded stakes.

French-bred Waya is possibly best known for her versatility, excelling on both dirt and turf in both Europe and the States. She also defeated males (including eventually Eclipse Award winner Mac Diarmida), and was undeterred from victory even when she was assigned 131 pounds in a handicap. Waya, who was trained first by Angel Penna and later David Whiteley, equaled a world record held by Secretariat when she went nine furlongs in 1:45 2/5 in the Diana.

My Juliet was remembered fondly by jockey Tony Black, who was aboard the filly revered for being the fastest horse of both genders in 1976.

“We nicknamed her the Bionic Filly, because after she had two screws in her cannon bone, she reached the pinnacle of her career,” Black said of My Juliet, who won the G2 Vosburgh and G2 Michigan Mile and One Eighth after having surgery to repair a fracture.

Black recalled seeing a Barbara Livingston photograph of My Juliet late in her retirement.

“I said, I want to go visit her. She's in the twilight of her life and I just want to put my hands on her neck one last time and tell her, 'Julie, you did so much for me. I love you,'” Black recalled. “I never did get the opportunity to do that. It taught me one lesson – don't just understand the real value of someone when they're gone. Tell them when they're here.”