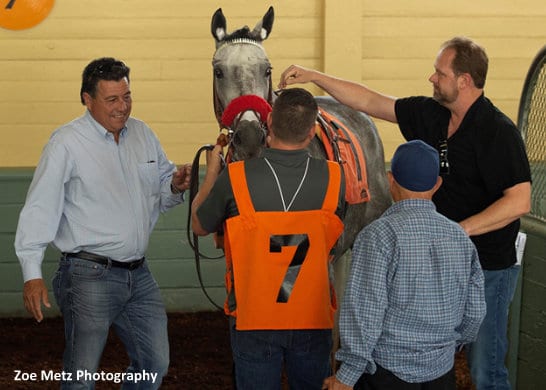 Also in tow are 2-year-olds Comical, Raging Whiskey and Shippy, along with the 3-year-old Listing – a Reddam Racing-owned son of Square Eddie trained by Ben Cecil, who is pointed to the Grade 3, $100,000 Quick Call on Opening Day July 11 at Saratoga.

“We arrived two days ago and everyone has settled in well,” said Mora. “We've brought Pavel for the Suburban and we have Comical for the Schuylerville, along with another filly, Shippy, that was purchased from a 10-length win at Laurel. Raging Whiskey, who won at Santa Anita, is nominated for the Sanford. Listing is by Square Eddie for Mr. Reddam and he's racing on the 11th at Saratoga going 5 1/2-furlongs on the grass. The first day was tough because of the humidity, but they've settled in well now and we're optimistic about their chances.”

Pavel, a 5-year-old son of Creative Cause, has won 3-of-16 starts while banking in excess of $2 million in purse money. The sturdy grey has competed at eight different tracks, including a pair of starts in Dubai, finishing fourth in the Group 1 Dubai World Cup two years running.

“Pavel has accumulated about 80,000 miles traveling…along with me,” laughed Mora. “He travels so much because he loves it. Even in Japan, although the race didn't come up like we hoped it would, he loved it there. He's made two trips to Dubai and has traveled all over the United States.”

Pavel won at the top flight in June 2018 with a prominent effort in the Grade 1 Stephen Foster at Churchill Downs, which was his last win. He returns to New York for the 1 1/4-mile Suburban from a wide sixth in the Grade 1 Runhappy Metropolitan Handicap.

“He hasn't won as many races as we'd like, but he's always a contender and knocking on the door all the time,” said Mora. “He's got a little, speed but he likes to have some speed to chase. We came here thinking it might be a short field and after the draw, he's number 11 of 11.”

Regular pilot Mario Gutierrez has the return call from the outside post in a field led by 9-5 morning-line favorite Catholic Boy.

“She's a nice filly and worked very impressively the other day at Santa Anita,” said Mora of Comical's June 29 breeze in 1:01.80 seconds.

Both Comical and Shippy, a recent private purchase by Reeves Thoroughbred Racing, are pointed to the Grade 3, $150,000 Schuylerville on Opening Day at Saratoga.

By Midshipman and out of the Speightstown mare Lead Me Not, Shippy was a $77,000 purchase at the 2019 March OBS. She debuted on June 14 at Laurel in a five furlong maiden race and romped by a widening 10 3/4-lengths as the odds-on favorite.

“The way she looks, I think this is a good purchase. I was impressed with her race at Laurel. I feel comfortable we have two legit chances there,” said Mora.

The Quarter Company's Raging Whiskey earned a 66 Beyer Speed Figure when graduating at second asking on June 2 at Santa Anita. Bred in Maryland by Finn's Nickel and Anchor & Hope Farm, Raging Whiskey is expected to start in the Grade 3, $250,000 Sanford on July 13 at the Spa.

Rounding out the quintet is the 3-year-old Listing, who won the I'm Smokin on debut in August at Del Mar and has since added the California Cup Turf Sprint and last out Desert Code at Santa Anita to his credentials. Out of the Yonaguska mare Marquis Diamond, Listing is a full sibling to stakes winners More Complexity and Green With Eddie.