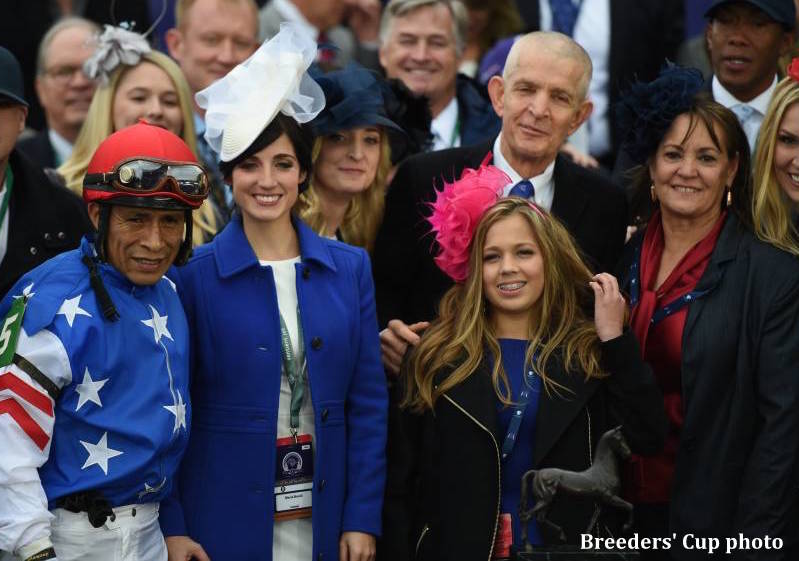 Attorneys for James and Linda McIngvale's Gallery Racing have filed a motion to dismiss a lawsuit from their former trainer, Maria Borell, who alleged the McIngvales owe her money and a lifetime breeding right as a result of a breach of contract and defamed her in comments made to the Paulick Report following her termination. Borell was fired one day after she saddled Runhappy for the McIngvales to win the Grade 1 Breeders' Cup Sprint at Keeneland on Oct. 31.

The motion on behalf of the McIngvales was filed on Tuesday in Fayette Circuit Court by Michael Meuser and Thomas Miller of Miller, Griffin & Marks. Borell is represented Richard Getty, Danielle Brown and Matthew English of the Getty Law Group.

The McIngvales do not dispute that a contract existed between Gallery Racing and Borell as a private trainer. However, attorneys for the McIngvales contend that Borell “readily admits that she was paid a set salary of $1,000 per week, which public trainers do not receive. Rather, they receive a day rate for the number of horses in their care, out of which they have to pay expenses of their operation (including for exercise riders, stall fees and the like).”

As part of the contention that Borell is entitled to 10 percent of Runhappy's earnings (the Super Saver colt earned $1,245,000 in three stakes victories, the G1 King's Bishop, G3 Phoenix Stakes, and Breeders' Cup Sprint), attorneys for Borell filed affidavits from three trainers (including two – Chuck Simon and Steven Moyer – who previously worked for the McIngvales), saying it was standard practice for trainers to receive a percentage of earnings and a lifetime breeding right for Grade 1 victories.

But Meuser and Miller say the affidavits “illustrate that there is no standard trainer compensation from Gallery Racing. For example, Charles Simon states that he received a 'day rate' of $76 per day per horse, not $1,000 per week. He also received a commission of 12 percent on purses. Steven Moyer, on the other hand, states that he received $700 per week, not $1,000, but also 6.5 percent of purses (not 10 percent). Borell received $1,000 per week (more than Moyer and more than the day rate for Simon would have allowed), but without the purse percentage.

“What Gallery Racing paid other trainers (trainers with far better training records than her own) is legally irrelevant in any event,” the McIngvales' attorneys wrote. “The question is not what contracts Gallery Racing had with any other person (including more successful and in-demand trainers), but what contract it had with Borell.”

Months into her employment, Borell was notified that she would receive bonuses of $10,000 for the King's Bishop, $5,000 for the Phoenix and $10,000 for the Breeders' Cup “at the discretion and largesse of Gallery Racing,” the motion to dismiss states.

Borell understood that she was not going to be paid a percentage of earnings, the McIngvales' attorneys say, based on an Aug. 9 email exchange with Wohlers that apparently came after Borell asked – and was rejected – for 10 percent of what Runhappy might earn in upcoming stakes, beginning with the King's Bishop.

“Again I just want to make sure you know how much I appreciate this opportunity,” Borell wrote to Wohlers. “I only asked because of my family's current situation. That amount of money would be a life changer. I never asked with the smaller races because I figured with me having the horses in the barn, that the 10 percent was off the table and we had never talked about it. The private training thing is new to me, and the other people I know who train privately do get the 10 percent still, but again I appreciate having my horses in the barn too, so I didn't worry about it. I just figured it wouldn't hurt to ask when it comes to stakes horses.”

In her response to Borell, Wohlers wrote that “training privately is a very different situation…It is costly to have a barn like we do as we try to run it in a first class way. I know you appreciate the opportunity and I think it will give you a chance to get your name out there in the racing world. … Think about if you had been paid 10 percent these past four months you would have only got $5,190 instead of $16,000 in the salaries. It seems sometimes like it's not as much money but in reality it comes out better usually unless you do have a major stake horse in the barn. It's also consistent money you can count on…”

According to the motion to dismiss, Borell stated in a court filing that she “did not push for a contract modification because she did not want Mrs. Wohlers to terminate her. She states that she was put 'in the unenviable position of walking away from a horse she loved and whose training she had so carefully overseen, or proceeding with her job.'

“That is not a legal basis for suing Gallery Racing,” the McIngvales' attorneys state. “Any employee who asks for, and is denied, a raise, is placed in the 'unenviable' position of having to decide whether to remain employed under the existing agreement (as unfair as the employee may think it is) or leave. The employee cannot remain employed under a salary agreement and then, after termination, sue for the raise that was requested and denied.”

The defamation allegations should be dismissed, Meuser and Miller wrote, because statements cited in Borell's complaint were opinion and that prior court cases have found such statements “nonactionable.”

A hearing is scheduled Jan. 8.

Borell has relocated to Florida, where she claimed two horses at Gulfstream Park on Sunday and was named as a trainer for the Drawing Away Stable.