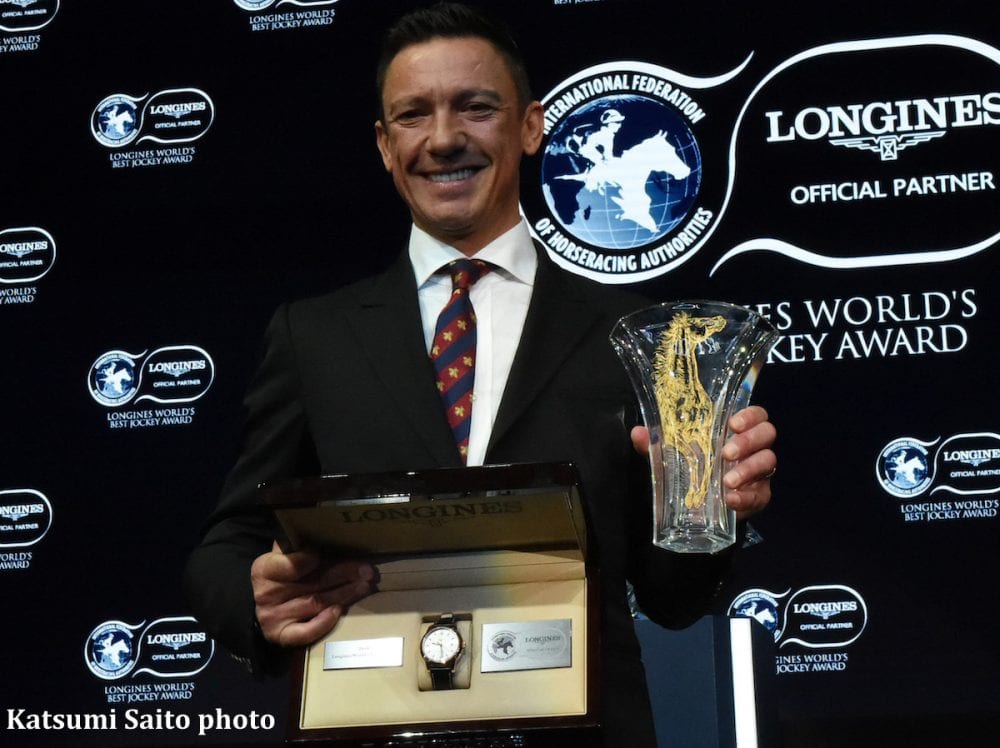 Frankie Dettori is the most successful current jockey at Royal Ascot with 60 winners and he reflected on how special the Royal Meeting is to him.

“I'm really looking forward to the meeting,” Dettori said on Thursday. “Me and John (Gosden) have gathered a pretty decent team and I've got some nice outside rides too. I broke my shoulder two years ago yesterday and missed the Royal Meeting so you are careful in the build-up to Royal Ascot. Sitting here and looking at my rides, they all look great and I'm looking forward to the week. You go there with good horses and tremendous expectations, but every race has 20 to 30 runners and everybody is there to win. It is not easy, every winner has be fought hard for and you need a bit of luck, but I'm very pleased with my rides. Last year I though Cracksman was a penalty kick, but he got beaten.”

The Italian jockey has an enviable book of rides, which are headed by the John Gosden-trained Stradivarius, who bids to retain his crown in the G1 Gold Cup (Thursday, June 20). The 5-year-old son of Sea The Stars is unbeaten in his last six starts and captured the Weatherbys Hamilton Stayers' £1-million Bonus last season following victories in the G2 Yorkshire Cup, Gold Cup, the G1 Qatar Goodwood Cup and G1 Weatherbys Hamilton Lonsdale Cup Stakes. The superstar stayer culminated last season with a gutsy success in the G2 QIPCO Long Distance Cup at Ascot and made a fine return to action when accounting for the Aidan O'Brien-trained Southern France in the G2 Yorkshire Cup on May 17.

“Stradivarius is doing well”, said Dettori. “He is very fresh and has become the people's favorite horse. He was unbeaten last year and won the Gold Cup. He has to try and defend his Gold Cup title. The great thing about him is that he wears his heart on his sleeve and he will not go down without a fight. People appreciate that and the public love him like we all do at Clarehaven. There is young talent coming through and new horses come along every year. They will want to have a shot at the title, but we'll see what happens. Competition is good and if they come into the ring, they know they will have a fight with us.

“Stradivarius' main priority is to try and win a second Gold Cup. Obviously, the £1-million stayers' bonus we will think about if we get to the last leg and the hope is still alive. However, the dream is to win the Gold Cup again. Her Majesty The Queen only comes down to present the trophy on two occasions, the Gold Cup and the Diamond Jubilee. It is an honor to receive the trophy from her. The Gold Cup is a fantastic race with a rich history and being ladies' day adds to the occasion so it is a special day.”

Dettori partners the exciting Too Darn Hot, also trained by Gosden, in the G1 St James's Palace Stakes (Tuesday, June 18). The son of Frankel was crowned Europe's Champion Two-Year-Old last term, having won all four of his starts, which culminated with G1 success in the Dewhurst Stakes at Newmarket. The Lord Lloyd-Webber-owned colt has this year endured an injury troubled preparation before finishing a creditable length second in the G2 Dante Stakes over an extended 10 furlongs at York on May 16. Dropped back to a mile just nine days later for the G1 Irish 2000 Guineas at the Curragh, Too Darn Hot chased home the Charlie Hills-trained Phoenix Of Spain and the pair are set to renew their rivalry in the mile contest on the opening day of Royal Ascot.

The Italian rider continued: “Too Darn Hot has had a very unfortunate time. We had to rush to get him onto a racecourse. We tried the Dante where he obviously didn't' stay combined with perhaps a lack of fitness. Then we tried the Irish 2,000 Guineas, when he wasn't last and finished a good second. I just feel like I haven't got him where I wanted him to be. Hopefully at Ascot on Tuesday, you see the old Too Darn Hot. I feel he has got more to give and you haven't seen the real him yet this season. He looks well and came out of the Irish 2,000 Guineas well. He is an amazing horse to ride in the mornings – I sit on him once in a while. King Of Comedy also runs in the St James's Palace Stakes and he is an improving horse and is entitled to be in the race – I will be riding Too Darn Hot.”

Connections of American sprinter Imprimis have secured the services of Dettori for the £500,000 G1 King's Stand Stakes (5f, Tuesday, June 18). Discussing the American sprinter's chances, he continued: “Imprimis is probably the best American turf sprinter. The King's Stand looks a very good race this year with Blue Point and Battaash. American sprinters have done well in the past, his form is very good and Joe (Orseno, the trainer) seems very happy with him. It is another tough race, but hopefully he runs well.”

Dettori has also picked up the ride on the Sir Michael Stoute-trained Crystal Ocean. Connections have decided to target the G1 Prince Of Wales's Stakes (Wednesday, June 19, 1m 2f) in what looks one of the races of the week, featuring Sea Of Class, Magical, Masar, and Deirdre.

“The Prince Of Wales's Stakes looks to be the best race of the meeting if everyone turns up”, said Dettori. “I am very pleased to pick up the ride on Crystal Ocean who is such a versatile horse. He loves Ascot, and is two from two this year. I am unlikely to ride any horses for Wesley Ward this year.”