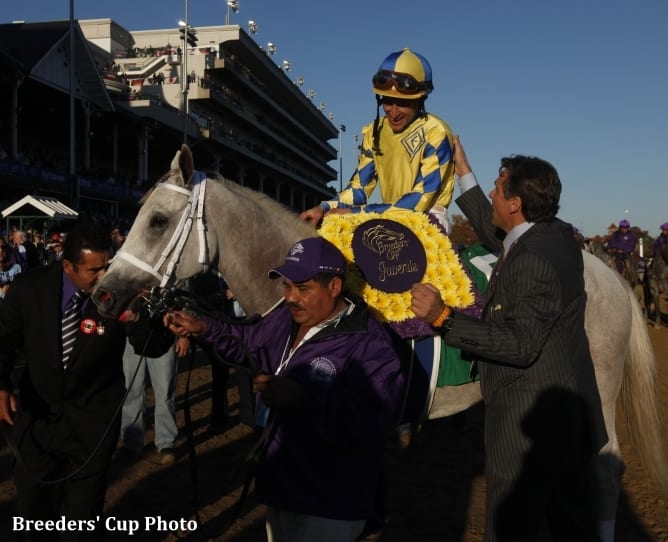 Hansen, who now stands in South Korea, with his owner after the 2011 Breeders' Cup Juvenile

Dr. Kendall Hansen, owner of 2011 juvenile champion and 2012 Kentucky Derby starter Hansen, has purchased Spendthrift Farm's interest in a 2-year-old gelding that will be pointed for a Derby campaign next year.

Let Me Go First, a son of Paddy O'Prado out of a Chief Seattle mare, is working towards a start in the Jerome Stakes at Aqueduct Saturday. The Grade 3 race is the first prep of 2016 that offers points on the Road to the Kentucky Derby. The gelding was last seen breaking his maiden in his third start at Parx Racing Nov. 22 at the same 1 mile 70 yard distance of the Jerome.

“Let Me Go First kind of came to me from out of the blue,” said Dr. Hansen, a pain management specialist in Northern Kentucky. A young bloodstock agent named Ryan Patterson brought the horse to his attention.

“I bought my share sight unseen on his recommendation, kind of an impulse purchase, but he looks like a horse with a lot of upside,” Hansen said. “He certainly has a pedigree that has Derby credentials.”


Sire Paddy O'Prado won multiple graded stakes during his career, including the G1 Secretariat Stakes at Arlington, on his way to earning more than $1.7 million. He finished third in the 2010 Kentucky Derby. Let Me Go First also has pedigree ties to 2009 Derby winner Mine That Bird, 2012 third-place finisher Dullahan and is a half-brother to Bolo, who finished 12th in last year's Run for the Roses.

One more connection to Derby history: Let Me Go First is in the barn of 28-year-old Blane Servis, son of John Servis, who trained the storied Smarty Jones to Derby and Preakness victories in 2004. Blane Servis likes what he sees so far in Let Me Go First.

“When Spendthrift sent him to me and he got off the van, I thought they sent me the wrong horse,” said Servis. “He was supposed to be a 2-year-old, but Let Me Go First looked like a fully developed 3-year-old.

“In his last start, he faced some promising horses, drew the 11-hole and was wide on both turns, only to pull away with his ears pricked to win by 3 1/2 lengths. I walked him back to the test barn and you'd never know he raced.”

Let Me Go First will be ridden in the Jerome by Roberto Rosado, who was aboard for the Nov. 22 victory.