Jockey Wayne D. Wright, who won the Kentucky Derby, Preakness Stakes and Belmont Stakes in separate years and was America's leading rider in 1934 and 1936, and the 19th century racehorse Tom Ochiltree, winner of the 1875 Preakness Stakes and numerous prestigious handicap events, have been elected to the National Museum of Racing and Hall of Fame by the Museum's Historic Review Committee.

Wright and Tom Ochiltree join contemporary selections Rachel Alexandra, Zenyatta, Ramon Dominguez and Steve Asmussen in the Hall of Fame Class of 2016. The Pillars of the Turf selections will be announced later this month. The induction ceremony takes place Friday, Aug. 12 at 10:30 a.m. at the Fasig-Tipton sales pavilion.

Wright was born Aug. 21, 1916 in Rexburg, Idaho. He began riding at the age of 15 in 1932, winning his first race in Reno, Nev. Wright finished sixth nationally in wins that year with 146. In 1933, Wright won 228 races to finish second to Hall of Famer Jack Westrope (301). His earnings of $168,225 placed fourth nationally and marked the first of six consecutive years Wright finished in the top five nationally in earnings. In 1934, Wright led all riders in earnings with $287,185 and was fifth in wins (174). He won his first Triple Crown race that year at the age of 17 when he piloted Joseph E. Widener's Peace Chance to win the Belmont Stakes, defeating that year's Preakness winner, High Quest.

In 1942, Wright won the Kentucky Derby aboard Greentree Stable's Shut Out and added a victory in the Preakness Stakes three years later with Polynesian for owner Gertrude T. Widener. Consistently among the top riders of his era, Wright He finished in the top 15 in earnings eight times overall. He also finished in the top 10 in wins in four consecutive years from 1932 through 1935.

Along with his wins in the Triple Crown races, Wright won three races aboard Triple Crown winner War Admiral, including the Whitney Handicap and Jockey Club Gold Cup. He also won the Dwyer and Arlington Classic with Triple Crown winner Omaha. He rode a third Hall of Famer, Eight Thirty, to victory in the 1938 Flash Stakes. 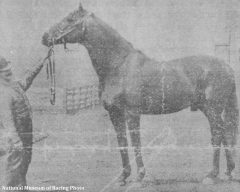 Racing from 1875 through 1877, Tom Ochiltree was a bay colt foaled at Kentucky's famed Woodburn Stud in 1872. A son of the celebrated sire Lexington out of the Voucher mare Katona, Tom Ochiltree was named for Col. Thomas P. Ochiltree, who fought for the Confederacy during the Civil War and later became a United Sates Congressman. The equine Tom Ochiltree started 33 times and posted a record of 21-5-3 with earnings of $41,445.

Originally purchased for $500 by J. F. Chamberlain, Tom Ochiltree did not race as a 2-year-old while growing into his massive frame. Arriving at the races as a 3-year-old in May of 1875, Tom Ochiltree won his career debut at Pimlico. Two days later, he followed with a victory in the third running of the Preakness Stakes at 1½ miles for trainer future Hall of Fame trainer R. W. Walden and future Hall of Fame jockey Lloyd Hughes. Following the Preakness, however, Tom Ochiltree wasn't the same. He finished behind Calvin and Aristides in the Belmont Stakes and could not catch Calvin and Chesapeake in the Jersey Derby. After finishing last and appearing disinterested in the Ocean Hotel Stakes in July, Tom Ochiltree was given some time off. When he returned in October, in the care of new trainer Anthony Taylor, Tom Ochiltree was rejuvenated, winning the Annual Stakes and Dixie Stakes before closing out the year by finishing third in the Breckenridge Stakes.

Prior to the 1876 racing season, Chamberlain sold the promising Tom Ochiltree for $5,000 to the famous sportsman George Lorillard, who put the horse back in the barn of conditioner Walden. Tom Ochiltree proceeded to become arguably the best thoroughbred in the East, winning seven of nine starts as a 4-year-old, including the Baltimore Cup (2¼ miles), Jockey Club Handicap (2 miles), Centennial Cup (2¾ miles), Capital Stakes (3 miles) and Saratoga Cup (defeating Parole at 2¼ miles while carrying 21 pounds more than his rival), all prior to the conclusion of July. After a well-deserved rest, Tom Ochiltree returned in the fall to win the Maturity Stakes (3 miles) and the Centennial Cup (4 miles) and finished the year with a record of 8-1-1 from 10 starts.

Tom Ochiltree continued to excel as a 5-year-old in 1877. His wins included the Westchester Cup (2¼ miles), Grand National Handicap (defeating Parole while carrying high weight), All-Aged Sweepstakes (again defeating Parole while carrying high weight) and a second Baltimore Cup (2¼ miles). Tom Ochiltree started 14 times that year, posting a record of 9-4-1. At ages 4 and 5, he raced against the future Hall of Fame member Parole six times and finished ahead of his rival in four of those contests, carrying higher weigh each time. Tom Ochiltree concluded his career by finishing third behind Parole and Ten Broeck, another future Hall of Fame member, in a celebrated sweepstakes at Pimlico in October of 1877.