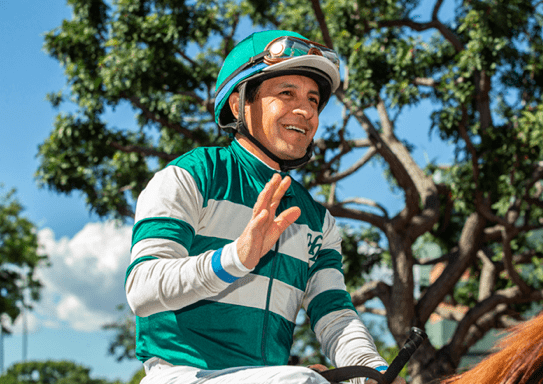 Victor Espinoza is back doing what comes naturally, the worst experience of his career well behind him.

The 47-year-old Triple Crown winner and Hall of Fame member has recovered 100 percent from serious injuries suffered in a training mishap at Del Mar 14 months ago and is doing what he loves best–riding–and winning.

“We were on a roll coming out of the Santa Anita meet in July and it carried over to Del Mar,” said his agent, Brian Beach. “He especially had a good last couple weeks, winning the Del Mar Derby and the Del Mar Juvenile Fillies Turf on Yesterdayoncemore, a real nice Irish-bred filly from Europe, so things finished up well and we're ready go for this meet.

“Hopefully, the momentum will carry over.”

For the 11th time in 13 races, Espinoza rides Tribalist for trainer Blake Heap in Friday's Grade II Eddie D Stakes for three-year-olds and up at five furlongs on turf.

An eight-year-old Tribal Rule gelding, Tribalist has made fewer appearances at the race track than a member of GA, only 12 starts over a span of seven years, from his first race on Aug.18, 2013, to his most recent, on July 24, 2019.

“He always feels great and when he's ready he tries hard,” Espinoza said. “He's an honest horse who still gives his best. It's a tough race, but anything can happen and he's got a good outside draw.”

As to strategy, Espinoza said, “I'll see how the race sets up, but plan to let him cruise early and ride him down the stretch. He always runs his race. When he comes on the track now, he's jumping up and down, so it means he's ready.”

Meanwhile, Peewee Reese returns in the Eddie D after an absence of six months.

“I almost had him ready to run in the Green Flash at Del Mar (won by Mr Vargas on Aug. 17) but I thought I was a workout short, so we've just been saving him for this race. His works indicate he's ready to go.”