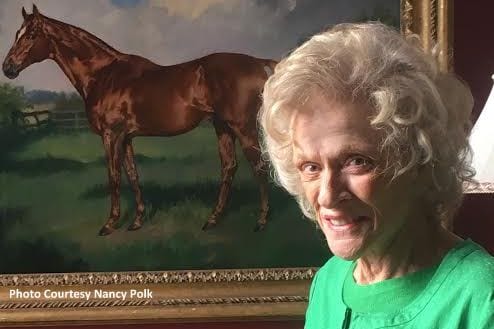 A year ago, Nancy Polk watched a horse she'd bred, raised and sold win a Breeders' Cup race, with Mongolian Saturday capturing the $1 million Turf Sprint at Keeneland. This week she'll fly to California to watch not only Mongolian Saturday but another horse she bred, raised and still owns as Daddys Lil Darling competes in Saturday's $2 million Breeders' Cup Juvenile Fillies at Santa Anita.

“Daddys Lil Darling was beautiful from the time she was born, and we did have high hopes for her. Of course we never dreamed she'd be a good racehorse. I was mainly doing it for my broodmare band. But what an exciting surprise.”

Daddys Lil Darling, a bay daughter of Scat Daddy, won a mile maiden race taken off the turf at Ellis Park by eight lengths, then took Churchill Downs' Grade 2 Pocahontas, giving her a fees-paid trip to the Breeders' Cup. In her last start, she broke from post 14 and rallied from last to be second in Keeneland's Grade 1 Darley Alcibiades, finishing a length behind Juvenile Fillies contender Dancing Rags.

“In the Pocahontas, everything went right,” said trainer Kenny McPeek, who is based at Churchill Downs and his Lexington farm. “The Alcibiades, the post position was a killer from the beginning. To get beat as little as she did and to give up that much ground was pretty much a 'dang it' moment. She deserved to win that day, but it didn't happen. Just regroup and maybe it's her turn this week.”

Daddys Lil Darling has taken an almost identical path as the McPeek-trained Dothraki Queen. That filly last year impressively won an Ellis maiden race on turf and the Pocahontas, then was second in the Alcibiades before finishing third to unbeaten champion Songbird in the Juvenile Fillies at Keeneland.

McPeek has five seconds and nine thirds with 27 prior Breeders' Cup starters. “Without a winner. It's a little discouraging,” he said, adding of the late Hall of Famer Bobby Frankel, who won six Breeders' Cup events in his career, “Bobby Frankel went 0 for his first (38), didn't he?”

Daddys Lil Darling, who will be ridden by Kentucky-based Corey Lanerie, is 12-1 in the morning line, again drew an outside post, 11 in a field of 12 two-year-old fillies. The favorite at 9-2 is Santa Anita's Grade 1 Chandelier winner Noted and Quoted.

According to The Blood-Horse, Miss Hot Salsa will be one of only 11 mares to have two foals competing the same year in the Breeders' Cup. There are three such mares this year, including Belle Watling, who for the second time will be represented by daughter Land Over Sea (Distaff this year, Juvenile Fillies last year) and son War Story (Classic this year, Dirt Mile in 2015) and Life Happened (defending champ Tepin in the Mile on turf and Vyjack in Dirt Mile).

Polk might be doing something very different today if not for the internet or a friend's remark.

She and her husband lived in Michigan, where she owned a travel agency and they would go to the races in Windsor, Canada. After her husband died and the internet made travel agencies an endangered species, Polk sought a new phase of her professional life.

“I'd been coming down to Kentucky to go to the races with friends,” she said. “When I talked to this one friend of mine, she said, 'You should buy a horse farm.' I told her she was crazy. But she encouraged me, and when I was down to go to the races one year, I said, 'All right. We've got time today. Let's go look at horse farms.' Normandy was the first one I set foot on, and I just fell in love with it.”

The 250-acre Normandy Farm on Lexington's famed Paris Pike dates to the late 18th century originally was part of Elmendorf Farm. It received its name from one-time owner Joseph Widener, who as a pilot in World War I was shot down over Normandy, France, and sheltered by the Resistance in a countryside barn. According to lore, Widener vowed to build a replica of the barn on his Lexington farm if he survived. The barn, called the Normandy barn, was finished in 1927.

Still, Normandy was hardly a turn-key operation. The prior residents left behind only a water trough and a pitchfork. That was almost 20 years ago.

“I started with one horse, then two, then another here and there until I ended up with the 16 I have now,” Polk said. “There's so much history on the farm. It's just a beautiful old farm and worth taking care of. That's my aim, to be a caretaker for the next person and to hopefully leave it as good or better than when I found it.”

Polk takes great pride that she's added to the farm's history by raising one Breeders' Cup winner and now potentially another.

“I just feel very lucky to have such a good filly and keep my fingers crossed that everything goes well with her,” she said. “Because this is like living a dream.”

Jennie Rees is a racing communications, publicity and fan-education specialist based in Louisville, Ky. She is a five-time Eclipse Award-winner and member of the Hall of Fame's Joe Hirsch Media Roll of Honor who spent 32 years as turf columnist for The Courier-Journal newspaper. Rees is publicity director for live racing at Kentucky Downs and Ellis Park and a communications consultant for the Kentucky HBPA.