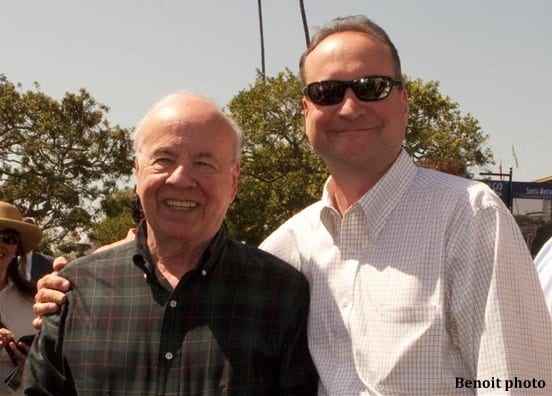 When news of comedian Tim Conway's passing at the age of 85 became known Tuesday morning, fond memories of the comedic giant were rekindled among the many people in the racing industry whose lives he touched, perhaps none more so than the hundreds of jockeys with whom he interacted and advocated for.

In a Winner's Circle appearance on the occasion of Santa Anita's Tim Conway Stakes, for 2-year-olds at six furlongs on Oct. 6, 2012, Conway, who was alongside his son, Tim Jr. and retired Hall of Fame jockey Eddie Delahoussaye, deadpanned, “They (jockeys) used to give me a lot of tips. None of them ever won.  Amazing.”

On the serious side, Conway and his wife Charlene were tireless in their efforts to raise money for disabled riders through the Don MacBeth Memorial Jockey Fund, which was co-founded by their close friend, Hall of Fame jockey Chris McCarron, in 1987 and assisted more than 2,000 jockeys over a 25-year run.

“He was as classy a gentleman as he was funny,” said McCarron by telephone from Midway, Ky., on Tuesday.  “He was generous with heart, spirit, generous with his time and he was just a class act through and through.  He could not have been more generous, especially with his time.”

When asked why he thought Conway was able to connect so well with jockeys, McCarron responded, “Well, first and foremost, he had the utmost respect for riders.  He understood what's involved.  You know, he tried galloping horses for a little while when he was very young in Cleveland, so for the rest of his life, he had the utmost respect for riders and trainers and owners…He had a deep love and respect for the industry as well.

“When he was on tour with Harvey Korman, Tim used to tell his tour manager to book them in cities where they had races going on, so he could go to the races when he wasn't on stage.  That's how much he loved the sport.”

World famous as a result of legendary television roles on “McHale's Navy” in the early 1960s, “The Carol Burnett Show” throughout the 1970s and various big screen appearances, Conway won six Emmy Awards and one Golden Globe trophy and was also widely acclaimed for playing the character of a hapless jockey named Lyle Dorf.  Conway was hilariously funny as “Dorf” in appearances on The Tonight Show with Johnny Carson and in many other television and film opportunities, including a comedic sketch during the 1987 Breeders' Cup telecast on NBC from Hollywood Park.

McCarron recounted a real-life mishap with Conway that provided a window into his comedic depth as well as his genuinely self-deprecating humor.

“Tim and Charlene were at my house for Christmas, 1986,” said McCarron.  “I was recuperating from a broken leg that I suffered at Oak Tree, right before the Breeders' Cup.  My wife Judy, had purchased an Equicizer from Frankie Lovato and it was in my living room. My book shelves were loaded with trophies and Tim got on the Equicizer and he says, 'McCarron, if I was a jockey, all these trophies would be mine.'

“So, he got on, leaned forward and pushed on the horse's neck and the neck snapped back and hit him right in the nose and actually broke his nose.  He couldn't stop laughing, even though he was bleeding right away.  Charlene took him to the Encino Hospital…Tony DeFranco (a close mutual friend) and Tim's daughter Kelly took a video camera into the emergency room, which was against the rules, but Tim talked the doctor into letting them do it.  So Tony sets it up like he's reporter and a jockey has been injured and they're on-scene to find out his condition.  The doc starts examining Tim and he asked him, 'So tell me.  What time did this incident happen?'

“Tim goes, 'Let's see.  It was the third race. That would've been about 1:30.'  Even though he was in serious pain, he couldn't keep from laughing and he couldn't keep us from laughing…That's the kind of guy he was.  He was a wonderful human being and I feel a terrible sense of loss for Charlene and all the kids.”

And, the same can be said of all those who knew the legendary Tim Conway here at Santa Anita and throughout the racing world.

Tim Conway is survived by his wife, Charlene, and seven children, including Tim Conway, Jr., who hosts “The Tim Conway Jr. Show” weeknights from 6 to 10 p.m. on KFI AM 640 in Los Angeles.