American Pharoah Team, Hammond Among Those To Be Honored By NTWAB 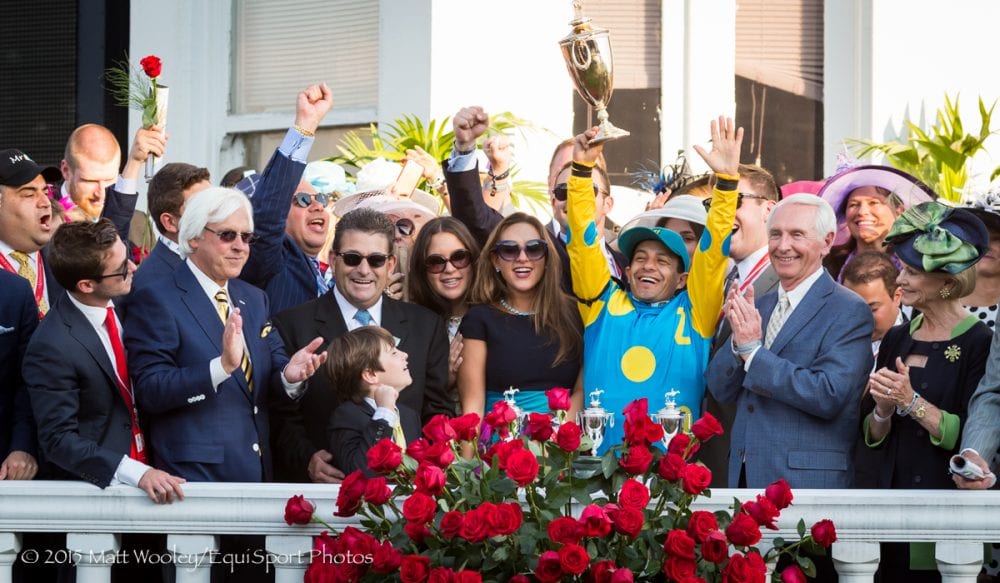 The connections of American Pharoah celebrate their Kentucky Derby victory

The National Turf Writers and Broadcasters will salute American Pharoah and the team that molded him into the first Triple Crown champion in 37 years to highlight its 56th annual awards dinner on Oct. 28 at the Griffin Gate Marriott in Lexington, Ky. Members of the NTWAB also voted to honor Eclipse Award winners Tom Hammond of NBC and Tim Layden of Sports Illustrated, Cathy Schenck of the Keeneland Library, and distinguished turf writer Bill Mooney. Tom Leach, the voice of the University of Kentucky, will emcee the dinner.

Ahmed Zayat, owner of American Pharoah, trainer Bob Baffert and jockey Victor Espinoza will be presented with the Mr. Fitz Award for typifying the spirit of racing. Zayat's willingness to showcase the 12th Triple Crownchampion whenever possible put the national spotlight on the sport and delighted fans. Baffert and Espinoza played critical roles in helping American Pharoah complete the historic sweep. The Mr. Fitz Award is named for the legendary trainer “Sunny” Jim Fitzsimmons.

Zayat said of American Pharoah, “This is America's horse. He's for all of you.”

Hammond will receive the third annual Jim McKay Award for broadcasting excellence. The Lexington, Ky., native hosts NBC's coverage of the Triple Crown races as well as “Summer at Saratoga” and the Breeders' Cup. He holds a master's degree in equine genetics from the University of Kentucky, providing him with extensive knowledge that he conveys to viewers in language that is easy to digest. He is a two-time Eclipse Award winner who earned an Emmy for his role in NBC's telecast of the 1992 Breeders' Cup.

Layden earned the Walter Haight Award for career turf writing excellence. Haight was an esteemed turf writer and columnist for the Washington Post. Layden has covered racing since 1976, beginning with the Schenectady (N.Y.) Gazette, the Albany Times-Union and Newsday. He has been the primary racing writer for Sports Illustrated since 2001. He is highly respected for an elegant writing style that is rich in detail. He won an Eclipse Award in 1987. The Maryland Jockey Club presented him with the Old Hilltop Award in 2012.

Schenck will be presented with the Joe Palmer Award for long and meritorious service to racing. Palmer was a celebrated turf writer for the New York Herald Tribune. Schenck, the head librarian at the Keeneland Library, has been an enormous help to journalists and others since she began working there in 1978. She holds a master's degree in library science from the University of Kentucky. The Keeneland Library was recognized with a Special Eclipse Award in 2002.

Mooney, a former winner of the Walter Haight Award among numerous other honors, will receive the inaugural Bill Mooney Award for displaying courage in the face of tremendous adversity. Mooney, a cancer patient, wrote a letter to colleagues after the disease was discovered in which he told them that one of his remaining goals is “to enrich the lives of others.”

Cocktails and a silent auction, featuring autographed racing industry collectibles, memorabilia and prominent stallion and race-winners halters, will begin at 6:00 p.m. Dinner to begin at 7:30 pm and Awards Presentations to begin at 8:30 p.m.

Tickets for the event are $75 for NTWAB members and $100 for non-members and guests. The Awards Dinner represents the NTWAB's only fundraiser and a portion of the proceeds from the event are used toward scholarship of prospective Thoroughbred racing journalists and to support Thoroughbred industry charities. Invitations will be mailed to members and non-members can request an invitation be sent by mail by contacting Loren Hebel-Osborne at [email protected] . Ticket purchases can also be made online at: https://www.eventbrite.com/e/ntwab-56th-annual-awards-dinner-tickets-18434861166