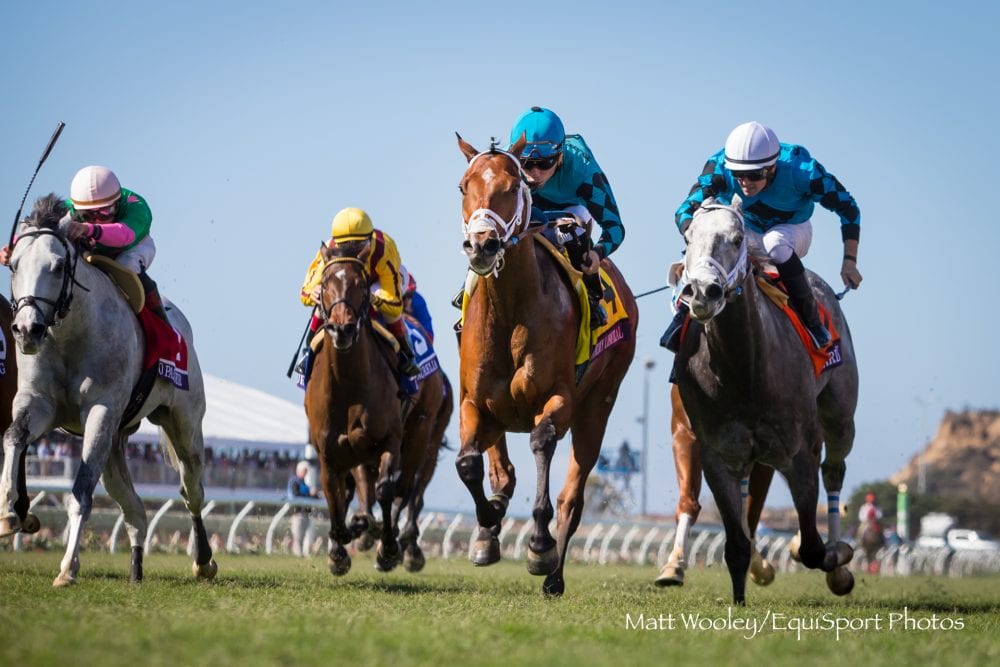 Rockingham Ranch and trainer Peter Miller brought home the exacta in Saturday's Breeders' Cup Turf Sprint at Del Mar, with Stormy Liberal just overtaking his stablemate Richard's Boy by a head at the wire. The winner, a 5-year-old gelding by Stormy Atlantic, came from mid-pack with a last-gasp run to hit the wire in front under jockey Joel Rosario. It was Rosario's second win in the Turf Sprint, following a 2014 win with Bobby's Kitten, and Miller's first Breeders' Cup win. Stormy Liberal covered five furlongs on the firm turf in :56.12, paying $62.40 to be the highest-priced winner in the race's history. Richard's Boy ran second after getting first run on the leaders, with Disco Partner checking in third. Bucchero was fourth, and 6-5 favorite Lady Aurelia finished 10th.

“I'm just elated to win a Breeders' Cup at home,” Miller said. “It's just amazing. The first win I've ever had, I thought we had home court advantage and they ran to that. Richard's Boy ran his butt off. I couldn't be prouder of these horses. They're just two gutsy, tough, hard-knocking horses.”

Bucchero was the quickest out of the starting gate, but Pure Sensation went out for the lead and trapped that rival on the rail in the first furlong. Pure Sensation set a first quarter of :21.98 just a half-length ahead of Bucchero, with Richard's Boy, Mongolian Saturday, Lady Aurelia and Stormy Liberal, the latter against the rail, all up close to the pace as well.

Entering the tight Del Mar turn, Pure Sensation moved up a bit to get the spot on the rail, forcing Bucchero to check slightly. He was joined by Richard's Boy on the outside, vying for the lead nearing the head of the lane.

It took Stormy Liberal a bit longer to work out his trip, but once Rosario got him clear he had dead aim on the now-leading Richard's Boy. Disco Partner was rolling from the rear of the field but the wire was coming up too quickly for his finish.

The wire couldn't come in time for Richard's Boy, however, as Stormy Liberal rolled up to his stablemate just in time to hit the wire in front. Richard's Boy had to settle for second, and Disco Partner just got up for third. Bucchero had no room to run for most of the stretch, but found space late to run a very good fourth.

“He broke well,” Rosario said of Stormy Liberal. “I asked him a little to get my spot. They were going very fast in front. But I listened to Peter. He said to stay inside and save some ground then make my run. I did that and it worked out perfect. He really was there for me. He did all the work.”

“I had a perfect trip,” said John Velazquez, who rode favorite Lady Aurelia. “There were a couple speed horses so I let them go. I got into a spot I wanted at the 3/8pole and she was just flat down the lane.”

Bred in Kentucky by Dapple Bloodstock and Gryphon Investments, Stormy Liberal was a $100,000 OBS June purchase by Dennis O'Neill. Rockingham's Gary Hartunian claimed him for $40,000 in October of 2016, and he proceeded to win four in a row on Santa Anita's downhill turf course. Though he ran eighth in his final prep for the Breeders' Cup, Stormy Liberal was all heart to earn his second graded stakes victory in the Turf Sprint. Overall, the gelding has a record of eight wins, six seconds and a third from 21 starts, and has now earned $983,570.