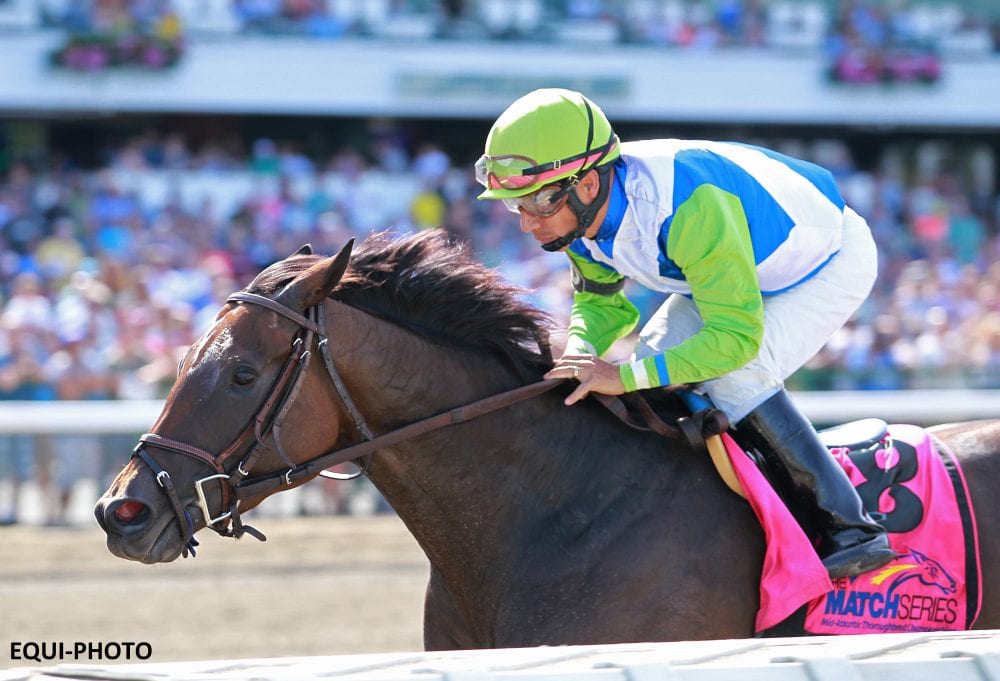 Lael Stables' Chalon, a Laurel Park stakes winner in her 4-year-old debut this spring, breezed Saturday morning ahead of her next engagement in the $1 million Breeders' Cup Filly & Mare Sprint (G1) Nov. 3.

Chalon went five furlongs in 1:01.80 over the all-weather track at the Fair Hill Training Center in Elkton, Md., where the multiple stakes-winning daughter of Grade 1 winner Dialed In is based with trainer Arnaud Delacour.

It was the second work for Chalon since being beaten a head when second in the six-furlong Thoroughbred Club of America (G2) Oct. 6 at Keeneland. She breezed a half-mile in 48.80 seconds Oct. 20 over Fair Hill's dirt surface.

“We had to give her some time off in the middle of the summer because she got hurt,” Delacour said. “It was nothing major but she needed time. I think that she's peaking now, and that's how you want to go to something like the Breeders' Cup.”

Chalon has been worse than third just twice in 12 lifetime starts, with three stakes wins and $487,295 in purse earnings. She captured the Jersey Girl last June at Belmont Park for previous trainer Peter Miller, then was a popular one-length winner of the Primonetta April 21 at Laurel in her first start of 2018 and first for Delacour.

In two previous tries at the Filly & Mare Sprint's seven-furlong distance, both last year, Chalon was fourth in the Test (G1) at Saratoga and second in the Raven Run (G2) at Keeneland, the latter to cap her sophomore season. After fetching $110,000 as a 2-year-old in training in March 2016, she was purchased by Lael's Roy and Gretchen Jackson for $550,000 at Fasig-Tipton's November 2017 mixed sale.

“It is obviously a very tough race. Seven furlongs is a little bit of a question mark for her,” Delacour said. “She's very efficient going six [furlongs]; at seven, everything is going to have to go her way.”

Delacour said Chalon is scheduled to leave next week for Churchill Downs, a track where she has never raced. Javier Castellano, who won the 5,000th race of his Hall of Fame career Oct. 20, will have the mount for the second straight race.

“If everything goes well and she comes back well from the breeze we'll ship on Tuesday afternoon to be at Churchill Wednesday morning,” Delacour said.

The Filly & Mare Sprint attracted an overflow field of 18 but Chalon drew into the main body of the race, which will be without undefeated multiple graded-stakes winner Dream Tree after she was discovered to have an entrapped epiglottis following a Friday workout at Santa Anita.

“It's always exciting,” Delacour said. “When you look at the field you're like, 'Wow, wow, wow,' because every single horse is a tough customer, but it's fun to be there.”