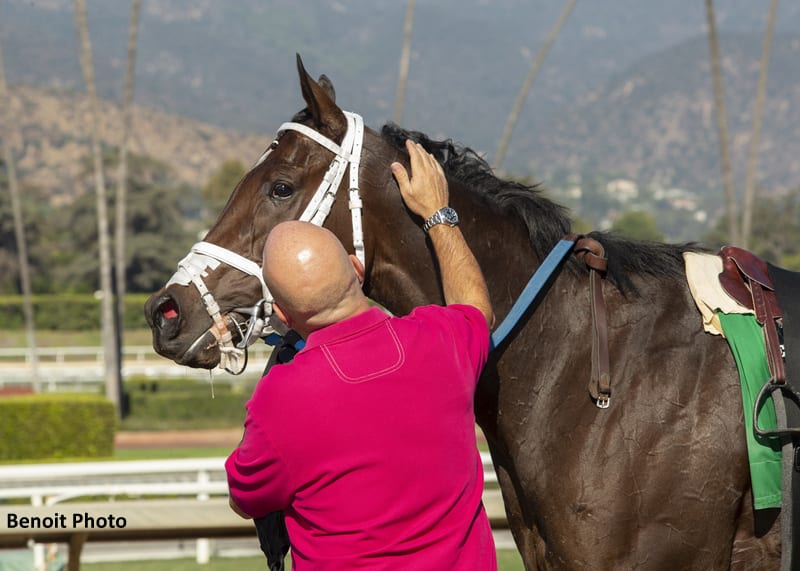 Last turning for home in a field of 11 juveniles, trainer Peter Miller's El Tigre Terrible hugged the rail throughout and split horses in the shadow of the wire to nail his stablemate Bulletproof One by a head in a thrilling finish to Sunday's $100,000 Speakeasy Stakes at Santa Anita. Ridden for the first time by Ruben Fuentes, El Tigre Terrible got five furlongs on turf and survived a jockey's claim of foul from Edwin Maldonado for interference in deep stretch.

With Greg's Diva and Alfie Solomons ensuring blazing splits of 20.76 and 43.99, El Tigre Terrible was content to make one run, and he made it count.

“I had never been on this horse, not even in the morning,” said Fuentes, who inherited the mount when regular rider Joe Talamo committed to riding in New York today. “They were going so quick up front that he settled on his own. I saved ground at the rail and we had a dream trip. It opened up and he finished strong. I didn't think we bothered the other horse.”

Owned by Slam Dunk Racing and Michael Nentwig, El Tigre Terrible, by virtue of his win, is now eligible for a fees-paid berth into the $1 million Breeders' Cup Juvenile Turf Sprint on Nov. 1 at Santa Anita.

“I felt like one of my horses was going to win, both of them ran super and we couldn't be prouder of the horses,” said Miller. “It was one of those last minute entries. It was about 10 o'clock in the morning before entries closed and I called Nick (Cosato, with Slam Dunk Racing) and said 'Hey, I think we should take a shot. If I owned the horse, I would do it.' He said 'go ahead,' and lightning struck.

El Tigre Terrible, who is out of the Hold That Tiger mare King City Kitty, garnered his first stakes win and he now has three wins from overall five starts. With the winner's share of $60,000, his earnings zoomed to $118,300.

The lone filly in the lineup, Bulletproof One was full of run around the turn and had to wait for room prior to making what appeared to be the winning move, but she couldn't quite hold off the winner while finishing a half length in front of speedy Greg's Diva.