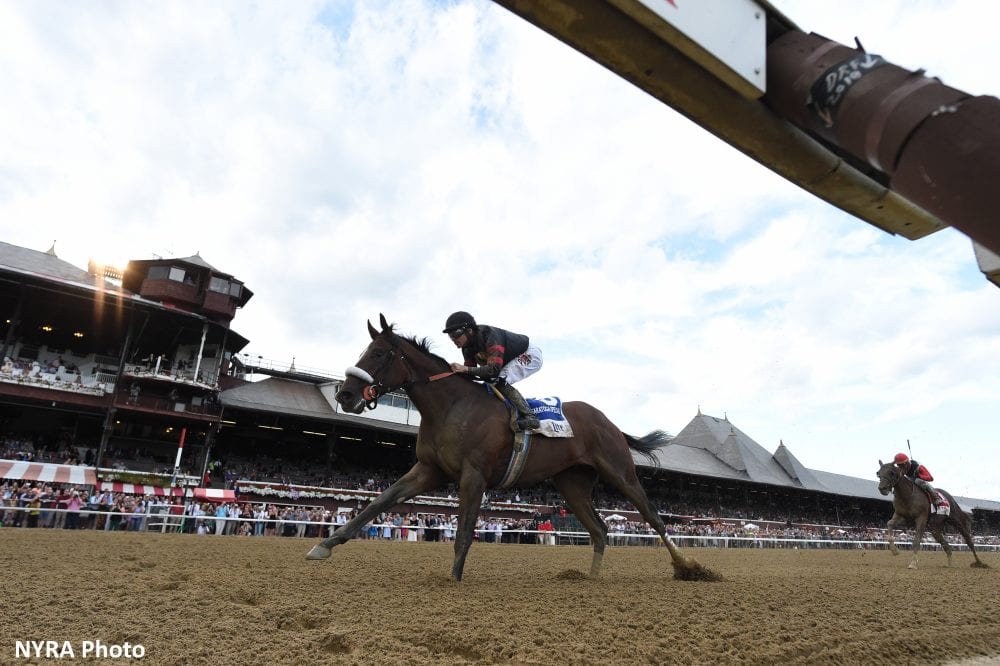 A talented seven-horse field of juveniles will look to add their names to the impressive list of past winners of the Grade 1, $500,000 Champagne on Saturday at Belmont Park.

One of five stakes on the packed 11-race Joe Hirsch Turf Classic Racing Festival card, the 148th running of the Champagne is a “Win and You're In” qualifier to the Grade 1, $2 million Breeders' Cup Juvenile. It also serves as New York's first “Road to the Kentucky Derby” prep race, offering 10 qualifying points to the winner for the 2020 Run for the Roses and 4-2-1 points to the second-through-fourth-place finishers.


Alpha Sixty Six will look to build on his debut victory by a neck over Hemlock at 6 ½ furlongs on September 7 at Belmont. The Todd Pletcher trainee rallied from sixth-of-seven with a strong surge on a fast main track. Owned by Paul Pompa, Jr., Alpha Sixty Six will attempt to handle the step up in class, drawing post 1.

He will again have the services of Hall of Fame jockey John Velazquez, who has won the Champagne four times, including three with Pletcher-trained horses with Proud Accolade (2004), Scat Daddy (2006) and Uncle Mo (2010).

“It's an ambitious placing but we're doing so because he run well first time out and you don't have a lot of options this time of year,” said Pletcher, who will be seeking his seventh Champagne victory. “We've been successful in the past in doing this with some nice 2-year-olds, so hopefully he can step up.”

“Hopefully from a talent standpoint they turn out to be similar,” Pletcher said. “He's a good-looking colt, whereas Liam's Map was a big, beautiful horse and looked like an Unbridled's Song. This horse is just a different type, but he's a good-looking colt. He trained well for his debut and put in a couple of good works since then. I think he'll appreciate the added distance and now it's just a question of if he'll have enough seasoning to step up into a Grade 1 second time out.”

Stronach Stables' Green Light Go is the field's lone graded stakes-winner, improving to 2-for-2 with a 3 ¾-length win in the Grade 2 Saratoga Special on August 10. Both of the Hard Spun colt's starts have garnered 84 Beyer Speed Figures, including his 3 ¼-length debut win on July 4 at Belmont going 5 ½ furlongs. Stretching out to the Saratoga Special's 6 ½ furlong distance, Green Light Go drew away from runner-up Noose and third-place finisher Tuggle.

August Dawn Farm's Three Technique will face the highest caliber field of his career following his third-out maiden-breaking effort on August 31 at seven furlongs at the Spa. The Son of Mr Speaker started his career with a pair of runner-up finishes, including second to Took Charge going five furlongs on June 14 at Belmont and running second to Basin – who went on to win the Grade 1 Runhappy Hopeful next out – on July 21 at Saratoga before breaking through.

“Obviously, the Champagne is the type of race you want to run in, because it means you have a good 2-year-old who can compete there,” trainer Jeremiah Englehart said. “He ran well breaking his maiden and deserves this opportunity. Let's see if he can make this next step up.”

Three Technique was purchased for $180,000 at the 2018 Fasig-Tipton Kentucky Yearling Sale. Englehart has kept him at his Saratoga base, where he has recorded three official workouts and from where he will ship to Elmont for his stakes bow.

“He seems like the type of horse where, with added distance, he's gotten better and better,” Englehart said. “Early on, it didn't seem like distance would matter too much with the way he was working. He could have won the first two races, it's just the way it worked out. I keep him up in Saratoga around me. We've sent horses down there who have done really well shipping in a day or so before the race, so we'll keep the same game plan as these other horses, which has worked pretty well.”

Irad Ortiz, Jr. has been aboard for all of Three Technique's previous starts and will have the assignment again, drawing post 4.

Zayat Stables and Gary Barber's Gozilla earned blacktype in his first stakes appearance last out, running third in the Grade 1 Hopeful on Saratoga's Closing Day September 2. The Flatter colt led the six-horse field through the opening half mile on a sloppy and sealed track in the seven-furlong race before finishing behind Shoplifted and the winner Basin.

Trained by Hall of Famer Steve Asmussen, Gozilla won his debut on August 10 at Saratoga by 4 ½ lengths. A $150,000 purchase at the 2018 Fasig-Tipton Kentucky Fall Sale, Gozilla will depart from post 5 with Ricardo Santana, Jr.

Rounding out the field is Big City Bob, winner of the Sapling on September 1 at Monmouth Park for trainer Jorge Duarte, Jr., making his Belmont debut [post 6, Christopher DeCarlo]; New York-bred Tiz the Law, a maiden winner on August 8 and $110,000 purchase at the 2018 Saratoga Sale, for trainer Barclay Tagg [post 7, Manny Franco]; and Truculent, who has finished third and second in two maiden starts, for conditioner Jack Sisterson [post 2, Kendrick Carmouche].

The Champagne, first contested in 1867, has seen two Triple Crown-winners springboard their careers with a victory in the contest, including Count Fleet (1942) and Seattle Slew (1976). Other Hall of Famers who won the Champagne include Ben Brush, Colin, Buckpasser, Riva Ridge, Foolish Pleasure, Alydar, Spectacular Bid and Easy Goer.