‘A Lot Of Marbles On The Table’: Diversify Bids For Jockey Club Gold Cup Repeat 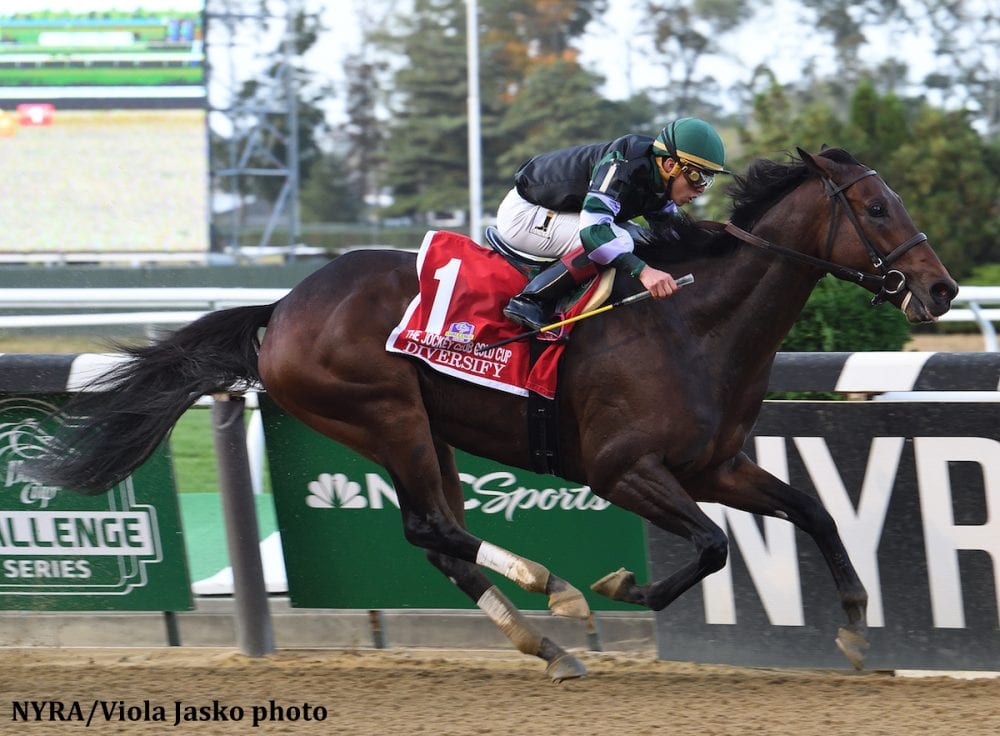 Lauren Evans and Ralph M. Evans' New York-bred millionaire Diversify will vie for his second straight victory in the 100th running of the Grade 1, $750,000 Jockey Club Gold Cup against a field of eight on Super Saturday at Belmont Park.

Carrying an all-fees-paid berth in the Breeders' Cup Classic as a  “Win and You're In” Challenge Series race, the 1 ¼-mile Jockey Club Gold Cup is one of four stakes and three Breeders' Cup qualifiers on Saturday, along with the Grade 1, $500,000 Joe Hirsch Turf Classic for the Turf and the Grade 1, $350,000 Vosburgh for the Sprint. The Gold Cup, carded as Race 10 on Saturday's 11-race program, will be broadcast on Belmont Park Live 4-6 p.m. ET on MSG+.

A 5-year-old Bellamy Road gelding trained by Rick Violette, Jr., Diversify is coming into the Gold Cup off three straight wins, including the one-mile Commentator for New York-breds in May and the Grade 2 Suburban at 1 ¼ miles on July 7 during the Belmont spring/summer meet.

Following his 6 ½-length Suburban victory, Diversify's connections planned to wait until the Grade 1 Woodward on closing weekend at Saratoga Race Course, but a five-furlong bullet breeze on July 29 prompted a redirection to the Grade 1 Whitney. The eleventh-hour switch was rewarded with an impressive gate-to-wire victory as the 3-2 favorite over a sloppy and sealed track, crossing the wire 3 ½ lengths ahead of multiple Grade 1 winner and reigning New York-bred Horse of the Year Mind Your Biscuits.

Last year, he won a pair of New York-bred stakes, capped by an 11 ½-length romp in the Evan Shipman at Saratoga, and successfully stretched out to 1 ¼ miles for the first time with a gutsy one-length victory in the 2017 Grade 1 Jockey Club Gold Cup.

“The Whitney was a last-minute decision, no question, but we went there because he was doing so well and everything was exceptional going into it,” said Violette. “Skipping the Woodward basically gave us another couple weeks to let him chill a little bit, refuel his tank. It gave us extra time to not really rest but feel out the horse and get us back to our best race.

“There's a lot of marbles on the table. A big race is a big race and there's some nice horses in there,” he added. “He's had three very, very good races and it certainly doesn't hurt that he can handle an off racetrack. He's a very good racehorse, he's fit, and the time since the Whitney should give us a fresh horse going into this.”

Diversify will be ridden by his regular jockey, Irad Ortiz, Jr., from post 6.

Diversify could have some pace competition from Godolphin's Group 1 Dubai World Cup winner Thunder Snow, making his second U.S. start for trainer Saeed bin Suroor. The 4-year-old Irish-bred colt completed his serious training for the Gold Cup Wednesday morning with an easy four-furlong breeze over the muddy Belmont main track in 52.94 seconds, picking up the pace late to cover the final quarter-mile in 25 1/5.

Thunder Snow's first trip to North America resulted in a disappointing non-run in the 2017 Kentucky Derby, where he began bucking shortly after leaving the gate and was pulled up by jockey Christophe Soumillon on the front side of Churchill Downs. After the Derby, Thunder Snow won the 2017 Group 1 Prix Jean Prat on the turf in France and Group 2 Al Maktoum Challenge in February at Meydan Racecourse.

He earned a 111 Beyer Speed Figure for his World Cup victory, taken in frontrunning fashion by 5 ¾ lengths in track record time over 2017 Travers and Pennsylvania Derby winner West Coast on March 31. In his only start since then, Thunder Snow set the early pace in the Group 1 Juddmonte International before fading to eighth on August 22 at York.

“We're excited to get him back to the dirt,” said Tommy Burns, bin Suroor's traveling manager. “He was running well in the U.K. on the grass in Group 1s and he did win a Group 1 in France on heavy ground in Saint-Cloud Racecourse, but he really enjoys the dirt, so we're happy to see him back on it.”

Soumillon has the return call. The pair will break from the outside post 8.

A pair of 3-year-olds exiting the Grade 1 Travers on August 25 at Saratoga in Mendelssohn and Gronkowski, both facing older horses for the first time.

Mendelssohn, second in the Mid-Summer Derby to Catholic Boy, will make his fourth straight U.S. start for champion European trainer Aidan O'Brien. An 18 ½-length winner of the Group 2 UAE Derby in March, the bay Scat Daddy colt finished last of 20 following a rough trip in the Kentucky Derby, contested over a sloppy track in May at Churchill Downs, and was third as the 3-2 favorite in the Grade 3 Dwyer on July 7 at Belmont prior to the Travers.

“He was doing great heading into the Travers, the only time he didn't do well was in the [race],” said Brown. “The track just got him that day.”

Ryan Moore will ride Mendelssohn from post 3, while Jose Ortiz will be aboard Gronkowski, breaking from post 2.

Trainer Todd Pletcher will be represented by ocularly-challenged Patch, exiting a fifth-place finish in the Woodward on September 1. The popularly one-eyed Union Rags colt has hit the board in each of his two previous starts at Belmont, finishing third in 2017 Belmont Stakes and winning a 1 1/16-mile allowance by a neck in May.

Patch will have the services of Luis Saez from post 4.

Rounding out the field for the 100th running of the Jockey Club Gold Cup are Discreet Lover, a sneaky third in both the Suburban and Whitney this summer before fading to a 12th-place finish in the Woodward last time out for owner-trainer Uriah St. Lewis; Uno Mas Modelo, entering the Gold Cup on a three-race win streak at distances of 6 ½ and seven furlongs; and Carlino, a 1 ½-length winner of an optional claiming contest at 1 1/8 miles for trainer Mark Hennig on August 26.