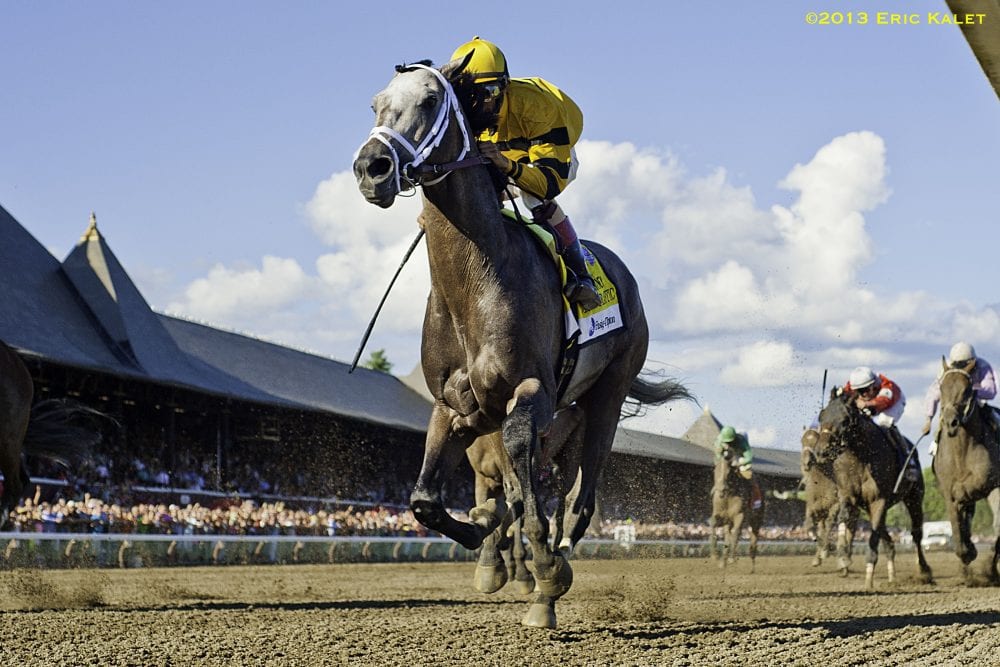 Cross Traffic captures the Grade I Whitney Handicap in 2013.

Bred by Red River Farm owner Jay Adcock, the colt is out of the Afternoon Deelites mare Dazzling Deelite, a stakes-placed performer on the track and a graded-stakes producer off the track. Dazzling Deelite is the dam of Grade 3 winner Bear Tough Tiger, an earner of $526,546.

“The colt is very attractive, with a great body, and very correct,” Adcock said of the newborn foal. “I couldn't be happier.”

Cross Traffic began his racing career with dominant back-to-back wins at Gulfstream for trainer Todd Pletcher. He jumped straight into graded stakes company for his third start and finished a close runner-up in the Westchester S. (G3) at Belmont. Cross Traffic earned a 116 Beyer for the performance, which still remains as the fastest Beyer ever on record by an offspring of the late leading sire Unbridled's Song.

Cross Traffic was again a narrow runner-up in his fourth start, this time in the prestigious Metropolitan Mile H. (G1). In his fifth start – and first around two turns, Cross Traffic broke through with an impressive victory against many of North America's top older horses in the renowned Whitney H. (G1) at Saratoga, defeating the likes of reigning Breeders' Cup Classic (G1) winner Fort Larned and eventual Breeders' Cup Classic winner Mucho Macho Man, among others.

By Unbridled's Song, Cross Traffic is out of the multiple Grade 1-winning Cure the Blues mare Stop Traffic. He retired to Spendthrift where he covered 123 mares in his first season at stud in 2015. Cross Traffic will stand his second season for a fee of $10,000 S&N, and is available through Spendthrift's “Breed Secure” program for a fee of $12,500.