Two-Time Horse of the Year Cigar Dead at 24 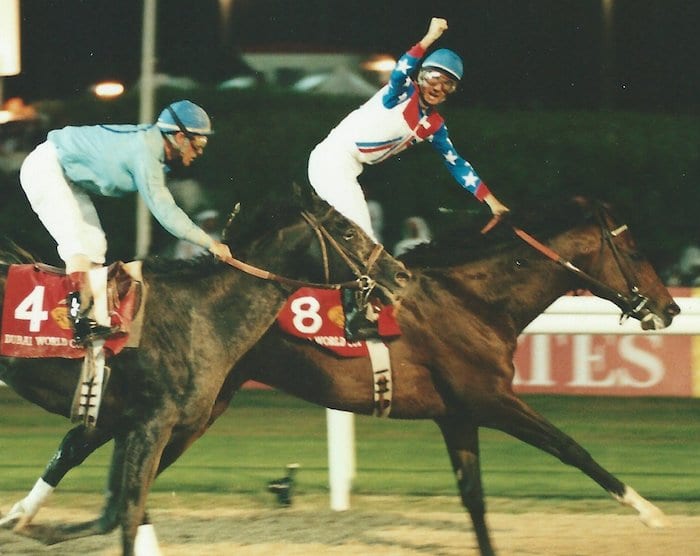 Two-time Horse of the Year Cigar, a popular member of the Kentucky Horse Park's Hall of Champions in Lexington, Ky., has died at the age of 24, according to various reports. Cigar reportedly had surgery Tuesday for a neck issue, but during his recovery, he took a turn for the worse.

The son of Palace Music had resided at the Kentucky Horse Park since May 1999 after it was determined he was sterile. Cigar retired to Ashford Stud in 1997 after a $25-million deal had been struck with owner Allen Paulson following a spectacular racing career that included 16 consecutive wins and earnings of $9,999,815. He failed to impregnate a single mare at Ashford despite the efforts of fertility experts from around the world. His failure at stud triggered one of the largest fertility insurance settlements in history.

Conceived at Paulson's Brookside Farm in Versailles, Ky., Cigar was foaled at the Pons family's Country Life Farm in Maryland. Palace Music, a grandson of Northern Dancer, was a turf specialist as a racehorse. Cigar was produced from the Seattle Slew mare Solar Slew, a $510,000 2-year-old purchase by Paulson who failed to win a race in seven starts.

Cigar did not race until February of his 3-year-old campaign in 1993, finishing seventh in a six-furlong maiden race at Santa Anita Park under the care of trainer Alex Hassinger. He didn't win until his second start a few months later, then spent the rest of the year racing on turf in California, with mixed results.

Late in the season, veterinarians detected chips in both of Cigar's knees and removed them surgically. When Cigar was ready to return to the track, Paulson transferred him to Bill Mott's stable on the East Coast. After four losses on turf for Mott, the eventual Hall of Fame conditioner switched Cigar to dirt, winning an Oct. 28 allowance race by eight lengths under Mike Smith. Mott then jumped Cigar into stakes company, where he won the Grade 1 NYRA Mile (since renamed the Cigar Mile) by seven lengths. That was in November 1994.

Cigar wouldn't lose again until August 1996, when Dare and Go pulled off a stunning upset in the G1 Pacific Classic at Del Mar. In between were victories in the Donn Handicap, Gulfstream Park Handicap, Oaklawn Handicap, Pimlico Special, Massachusetts Handicap, Hollywood Gold Cup, Woodward Stakes, Jockey Club Gold Cup, Breeders' Cup Classic (all in 1995), then a second win in the Donn, the inaugural Dubai World Cup, a second MassCap, and the Arlington Citation Challenge at Arlington Park (all in 1996).  That final victory equaled the 16 consecutive victories of the great Calumet Farm runner Citation. 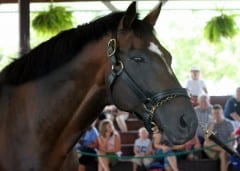 Cigar resided at Kentucky Horse Park for the past 15 years

Jerry Bailey, who was inducted into the National Museum of Racing Hall of Fame in 1995, rode Cigar in every race following that first allowance win on dirt, since Mike Smith, at the time, was the regular rider of another future Hall of Fame horse, Holy Bull.

Mott was inducted into the Hall of Fame in 1998, and Cigar was inducted in 2002, his first year of eligibility. In a poll of horse racing experts conducted by Blood-Horse magazine in 1999, Cigar was voted the 18th greatest North American horse of the 20th Century.

“Cigar thrilled racing fans across the world with electrifying performances in his great campaigns of 1995 and 1996,” said Breeders' Cup president and CEO Craig Fravel.  “We join the Thoroughbred community in saluting the memory of this remarkable racehorse.”

“Cigar remains the standard for greatness among Thoroughbred racehorses of the past quarter-century,” said Alex Waldrop, president and CEO of the National Thoroughbred Racing Association.  “He attracted massive crowds from Boston to Los Angeles, including untold numbers of new fans mesmerized by his immense power and unmatched consistency. Not since the Triple Crown years of the 1970s have we seen such a talent.”

The Kentucky Horse Park issued the following statement on the great champion:

“The great champion Cigar thrilled racing fans and surely brought new ones to the sport as he compiled win after win in his incredible streak of victories,” said Governor Steve Beshear. “An example of racing at its best, he continued to serve as an ambassador, bringing joy to countless visitors to the Hall of Champions at the Kentucky Horse Park, where he will be missed.”

The first horse to tie racing legend Citation's record of 16 consecutive victories, Cigar had lived at the Kentucky Horse Park since his retirement in 1999. Cigar was inducted into the National Museum of Racing and Hall of Fame in August 2002, his first year of eligibility.

“Cigar had been experiencing arthritis-related health issues over the past six months and was in outstanding physical and mental condition other than the osteoarthritis he was suffering from in several of his cervical vertebrae,” said Kathy Hopkins, director of equine operations for the Kentucky Horse Park.  “Medical therapies had failed to relieve the pressure that the arthritis was causing on his spine, which had resulted in instability in his hind legs.”

Cigar had been under the care of a team of veterinarians from the Hagyard Equine Medical Institute and the Rood and Riddle Equine Hospital in Lexington, some of the best equine veterinarians in the world. The team of veterinarians and surgeons had deemed that spinal surgery was the only option to relieve the pressure and ensure the highest quality of life for the horse.

“Cigar had been suffering from a cervical spine instability for which conservative medical therapies could no longer halt the disease's progressive nature,” said Dr. Rocky M. Mason, of the Hagyard Equine Medical Institute. “The decision to seek out a more lasting treatment modality was made.  Surgery is never an easy decision in a 24-year-old horse, but Cigar had proven himself a regal, classy and determined patient making the decision to proceed an easier one.”

“The Kentucky Horse Park was committed to providing him with the highest level of care possible,” said Hopkins. “We are heartbroken to lose this great horse, especially as we were trying to do everything we could to improve his quality of life and make him more sound and comfortable. Our park family is immensely grateful to Dr. Reed and the outstanding medical teams at Rood and Riddle and Hagyard Equine for their ultimate dedication to and concern for this unmatched champion.”

“Cigar developed a compression of his spinal cord in the lower part of his neck,” said Dr. Reed.  “The most severe compression was between cervical vertebra 6 and 7, with additional compression between cervical vertebra 5 and 6. This was an acquired problem related to arthritis, and bony remodeling in the neck. The severity of this spinal cord compression became so problematic that all parties were left with few options, the best one being surgery. This was a significant surgery involving a prolonged recovery. Unfortunately, during recovery Cigar suffered a vertebral fracture and passed away.”

Hopkins said Cigar will be remembered as one of the greatest horses the world has ever seen, and thanked fans who have supported Cigar and the Kentucky Horse Park since his retirement. She also noted the efforts of park team members who have taken excellent care of him over the years, including Wes Lanter, Robin Bush and the late Cathy Roby.

Dr. Reed continued, “The outcome was disappointing and very sad for many people; but especially for Wes and Kathy who remained at his side to the end.”

Like the other Hall of Champions horses who died in retirement at the park, Cigar will be buried on the Memorial Walk of Champions near Thoroughbreds Alysheba, Bold Forbes, Forego, John Henry and Kona Gold; Standardbreds Cam Fella and Rambling Willie; American Saddlebreds CH Imperator, CH Skywatch and CH Gypsy Supreme; and American Quarter Horse Sgt. Pepper Feature.

“Cigar was an incredible horse who left an everlasting mark on the racing world,” said Ted Nicholson, interim executive director of the Kentucky Horse Park. “We are honored that Cigar was able to spend so many years of his life here at the park where he was visited by so many fans and will always be remembered.”

A public memorial service will be held for Cigar at a future date, yet to be determined.