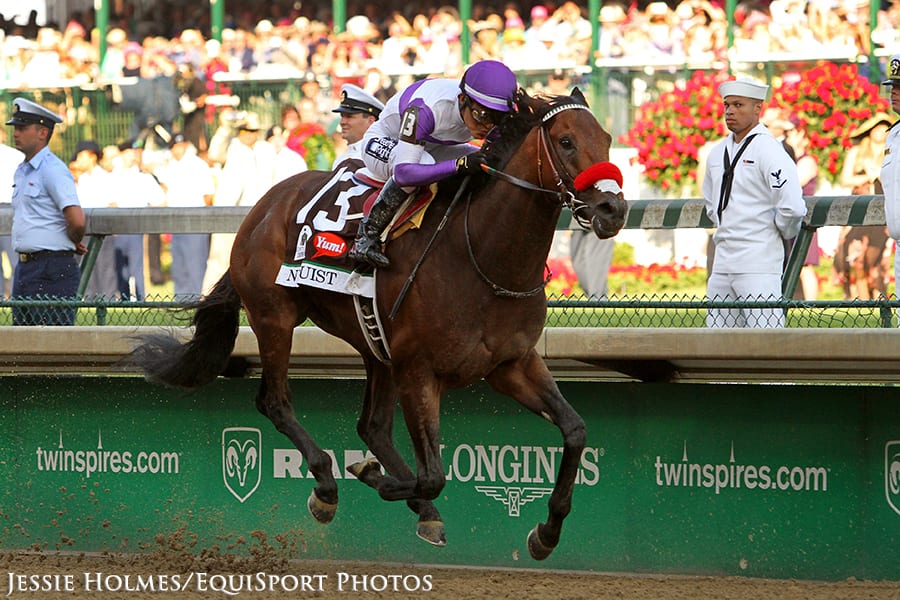 The incoming class of stallions with first weanlings reached its latest measuring point when it tested the Fasig-Tipton Kentucky Fall Selected Mixed Sale and the Keeneland November Breeding Stock Sale earlier this month. When the dust settled, the pair in Godolphin blue filled the exacta by average first-crop weanling sale price.

Champion Nyquist and multiple Grade 1 winner Frosted, both residents of Darley America in Lexington, Ky., held the top two average prices of their class through the end of the November sale season. The returns were an early validation for the high commercial expectations placed on the stallions by their initial stud fees: $50,000 for Frosted and $40,000 for Nyquist, both among the highest of their first-year class.

The pair set the pace in a deep group of first-year stallions that will continue to sort itself out as their initial crops develop through the auction calendars and reach the racetrack, where their legacies will ultimately be defined.

The champion juvenile of 2015 and Kentucky Derby winner of 2016 continued to set the pace among his contemporaries at stud, with his first foals generating the highest average price through the major mixed sales.

Nyquist's class-leading average of $279,000 is highlighted by the most expensive first-crop weanling of the November auction season, a $600,000 colt who sold to Larry Best's OXO Equine at the Keeneland November sale. The chestnut colt is out of the placed Pulpit mare Holy Place, who is herself a half-sister to champion Lady Eli and G3 winner Bizzy Caroline.

The stallion also put the highest-priced first-crop weanling through the Fasig-Tipton November Sale, when the bloodstock agency Solis/Litt landed a filly for $260,000. Out of the stakes-winning Malibu Moon mare Martha's Moon, the filly's third dam is the cornerstone broodmare Blush With Pride.

“Nyquist is that special horse who was precocious enough to break his maiden going five furlongs in early June of his 2-year-old year and stay unbeaten through the Kentucky Derby,” said Darley America's Darren Fox.

Frosted sits second in his class by both total revenues and average sale price after the most recent tilt, topped by a $310,000 colt who went to Cavalier Bloodstock at the Keeneland November sale. The gray or roan colt is out of the placed Medaglia d'Oro mare Spanish Gold, from the family of G1 winners Another Review, No Review, and Cavorting.

The stallion's 156 mares bred in his debut book was the fifth-most in his class, and Fox said the positive reception of Frosted's first foals reflected the quality of mares that visited him in that critical first season.

“Frosted has no chink in his armor,” Fox said. “The best by Tapit, out of a Deputy Minister mare, his first two dams are G2 winners, two proven sires in his female family. He's a three-time G1 winner, including the fastest-ever winner of the historic stallion-making Met Mile. Add in his incredible physical and it's easy to see why he bred the best book of mares on CI (Comparable Index) and CPI (Class Performance Index) in his first and second year among his sire crop.”

The champion sprinter of 2015 was the highest-grossing first-crop weanling sire at the close of the Keeneland November sale, from the fifth-most horses sold.

Leading the way was a bay colt out of the stakes-placed Macho Uno mare Minds Eyes who hammered to Spendthrift Farm for $240,000. G2 winner Topicount and G3 winner Jahid could be found in the colt's extended page, along with Panamanian champion Lady Valery.

“We're certainly pleased with the way they were received,” said Claiborne Farm's Walker Hancock. “We were kind of anticipating it based on the quality of foals we saw on our own farm, but it was nice to see everyone else had quality foals just like we did. It seemed like the buyers really liked what they saw. They're very athletic and have nice walks, and looked like they'd be nice prospects. We're very comfortable with where we are with him and we're excited for the future.”

In addition to the physical stamps Runhappy has passed down to his first foals, Hancock said one thing he wasn't seeing from the stallion's foals gave him a superstitious sense of optimism.

“I was telling someone the other day, I haven't seen a chestnut one, and the only sires I've seen like that are Blame and War Front,” he said. “I hope that's a trend that continues, because if so, then Runhappy's in a very good spot.”

California Chrome retired to stud with palpable buzz after earning two Horse of the Year titles, and his first dip into the commercial pool showed a healthy initial interest in his foals.

The top bid-getter among California Chrome's first slate of weanlings to date was a gray or roan filly who sold to Old Chapel Farm for $175,000 at the Keeneland November sale. Out of the winning Unbridled's Song mare Edit, the filly's page includes champion Tempest Queen.

Duncan Taylor of Taylor Made Farm admitted that market skepticism remained toward California Chrome, given the horse's family ties outside of the Bluegrass State, but it was a familiar road for the operation, which co-owns another California-bred who became Horse of the Year and went on to become an elite sire. No matter the results this early in the proceedings, Taylor knew patience would be key.

“Overall, we thought he sold well,” Taylor said. “I told my brothers the closer they get to the races, the more they're going to be worth. That's just how it is. A lot of people, when it's a stallion that's got a sire that's not a main Kentucky brand, a lot of Kentuckians dismiss that. You saw it with Tiznow and some others. They can be good good stallions, and anybody that saw Chrome race is going to want to race the horse, and he's good-looking.

“They're good-looking horses,” he continued. “They've got good shoulder, hip, good balance. Overall, they've got a nice head and neck to them, and they're not a heavy front-end horse. He was like that, and was very sound. I would expect his offspring to be the same way.”

Elliott Walden of WinStar Farm noted the importance of getting off the mark quickly with commercial weanlings from a new stallion, and the 2016 Preakness Stakes winner came back from his first Kentucky mixed sale season with positive reviews. With decisions being made for the upcoming breeding season, that momentum can help fill future books.

“I've had a lot of people comment to me about them,” Walden said about Exaggerator's first foals. “It does help [drive interest in breeding to the stallion], but then they've still got to go out there and get it done. It's a nice addition to their third crop, making people want to come back and breed to them.”

Exaggerator's top weanling so far is a colt who sold to de Meric Sales, agent, for $230,000 at the Keeneland November sale. The Virginia-bred dark bay or brown colt is out of the unraced Include mare Sun Salutation, from the family of Japanese champion Red Falx.

“We're very pleased with Exaggerator and pleased with the balance that the foals have,” Walden said. “They have good size and good length. I think, overall, it's a really good group.”

Rounding out the top ten…