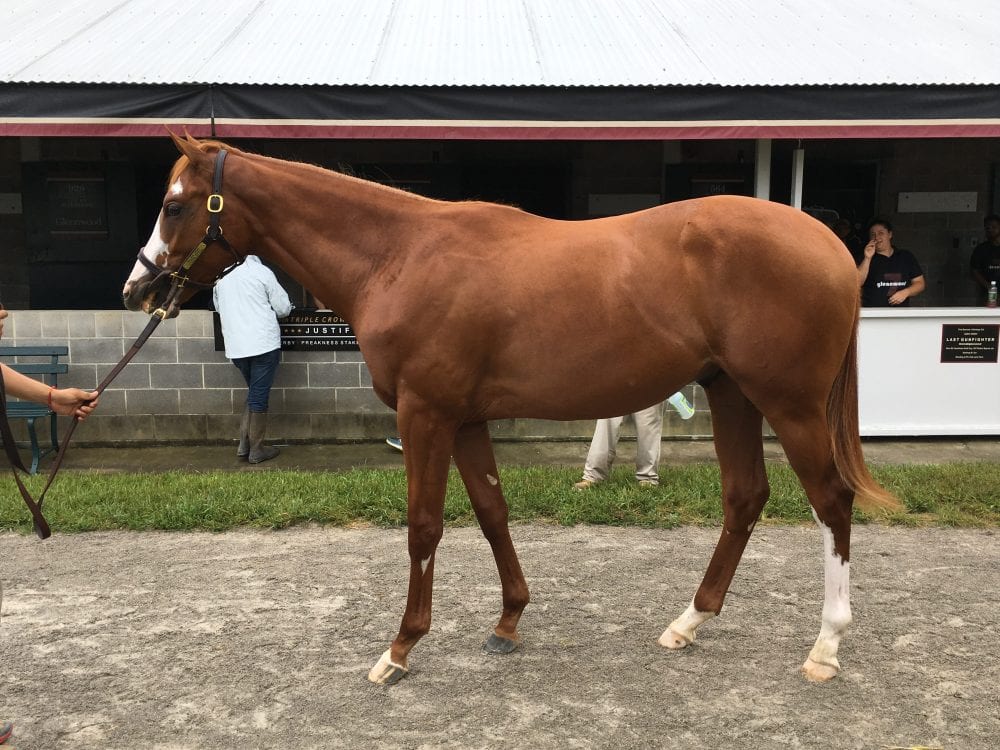 Hip 443, a half-brother to Justify, by Will Take Charge.

After going through the ring as one of the most anticipated offerings of this year's Keeneland September Yearling Sale, Hip 443, a half-brother to Triple Crown winner Justify, was kept by breeder Glennwood Farm after finishing under his reserve on Tuesday with a final bid of $1.75 million.

The chestnut Will Take Charge colt is out of the Grade 3-placed Ghostzapper mare Stage Magic, whose three winners from as many runners also includes Grade 3 winner the Lieutenant. Glennwood Farm also consigned the colt, as agent.

“We're happy to keep him,” said Glennwood's Tanya Gunther. “We value him highly. We think a lot of the mare. I think the mare puts a lot into her foals. She's had two graded stakes winners, another winner, and another they think highly of. Will Take Charge being unproven is what it is, so maybe we'll have to go prove him as a stallion. That's what we'll go try to do.”

Gunther said the colt would be kept to race as a homebred instead of going to a 2-year-olds in training sale next year, but the operation was open to offers from potential partners. A decision on a trainer would be made at a later time.

“If someone wanted to come in as a partner, that was something we kind of wanted to do all along anyway,” she said. “Actually, that was our preferred route. We thought we'd come here for a public valuation and see if that was possible to do. If somebody wanted to come in for half, we would be happy to entertain that, but we're happy to go solo, as well.”

“I know our team is quite happy to be breaking him on the farm,” Gunther continued. “The guy that normally rides for us on the farm will be excited to get on his back for the first time.”

Gunther said the reserve on the colt was $1,799,000. The horse was offered with an “all the way” reserve, meaning the auctioneers will raise the bid up to the reserve price whether there is live money on the horse or not.

“We always go all the way, so where the live money stopped, I don't know,” she said. “I always watch the horse and see how that's going.”

The colt is from the second crop of champion Will Take Charge, who stands at Three Chimneys Farm in Midway, Ky. His first foals are juveniles of 2018. Gunther said the stallion fit well with the mare both physically and on the page.

“He was a very good racehorse, a nice big, strong, scopey horse, with a great female family,” Gunther said about Will Take Charge. “We liked the cross, the inbreeding, and just the overall picture of the pedigree. We thought he was one of the most promising first-year stallions to retire that year, and we thought it would be a good match for a year.

“That's the first time we've gone to an unproven stallion [with Stage Magic],” she continued. “We normally go to a couple proven stallions, then we might try a sexy young stallion when they come out, then she goes back to proven stallions. She's got a Pioneerof the Nile colt at foot, she's in foal to Quality Road, and she's go to Curlin next year, which we're excited about all of those.”

Justify, a son of the late Scat Daddy, was consigned by Glennwood Farm at the 2016 Keeneland September sale, where he went to China Horse Club and WinStar Farm CEO Elliott Walden's Maverick Racing for $500,000.