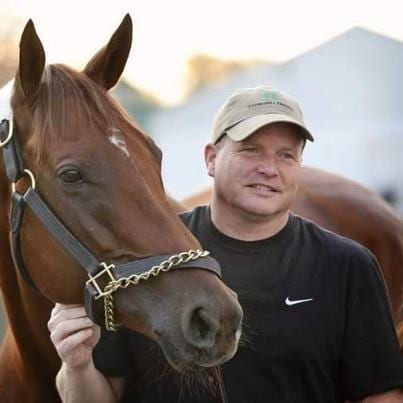 Much of the focus on Saturday, Jan. 13 will be placed on the field of 14 3-year-olds chasing Kentucky Derby dreams in the Gr. III LeComte at the Fair Grounds. Earlier on the card however, Tapability, the first foal out of two-time Champion Female Sprinter Groupie Doll, will be making his career debut for trainer William “Buff” Bradley.

Tapability is by leading North American sire Tapit and owned by Mandy Pope's Whisper Hill Farm LLC. Pope bought the two-time Breeders' Cup Filly and Mare Sprint winner at the 2013 Keeneland November Sale for $3,100,000. Following such a lucrative purchase, she remained in training under the care of Bradley and made two final starts before going off to the breeding shed. Such final starts came in the Gr. I Cigar Mile at Aqueduct against colts where she was fourth before rounding out her successful career at Gulfstream Park in the Gr. III Hurricane Bertie in January 2014. Groupie Doll is Bradley's most successful Thoroughbred to date with $2,648,880 in career earnings. That being said, Bradley has an obvious sense of pride in conditioning her first foal.

“We're very happy and very thrilled to be able to train him,” Bradley said. “Mandy has been very nice to us and has the confidence in us to send him to us at let us train him. Apparently (Tapit and Groupie Doll nicked pretty well) because that's where the next couple of babies are coming from. The next one is a filly and then there's another Tapit colt. It's pretty exciting to be able to run this horse.”

In preparation for his career debut, Tapability worked a half-mile in :49.80 over the Fair Grounds main track on Saturday morning.

“He breezed Saturday morning from the gate,” Bradley said. “He's been a little slow coming out of there so we were glad that he breezed very well out of the gate this morning. He's ready to go.”

Bradley went on to compare Tapability to his champion mother in terms of their behavior around the barn.

“He's pretty much like Groupie Doll in his aggressiveness,” Bradley said. “When he gets out there and wants to do it you can see that he's really on it. She might have been a little more laid back around the barn area whereas he's a bit more aggressive around the barn and in his stall. It's probably (because he's a) colt, but you can tell that he's a very happy horse, always wants to play. He's very manageable though and he's a very happy horse.”

Later in the day, Bradley will send out The Player in the $75,000 Louisiana Stakes, run at a distance of a mile and 70 yards over the main track.

Nicknamed “Angus” around the barn due to his rock star mentality, the 5-year-old son of Street Hero, owned by Bradley in partnership with Carl Hurst, will be looking for redemption after a fifth-place effort in the Gr. I Clark Handicap at Churchill Downs on Nov. 24 behind Seeking The Soul. His last victory took place prior to such an effort in the Gr. III Fayette at Keeneland on Oct. 28.

“He had a very nice (half-mile) breeze (in :49.80 on Saturday) morning,” Bradley said. “I just don't think that the Clark was his race, he's better than that. He encountered some problems in there but he shipped down here and has been very happy here. He showed in the Fayette and in some of his other races that he's got the talent to compete at a high level.”

Hall of Fame jockey Calvin Borel will ride The Player who will break from post five.