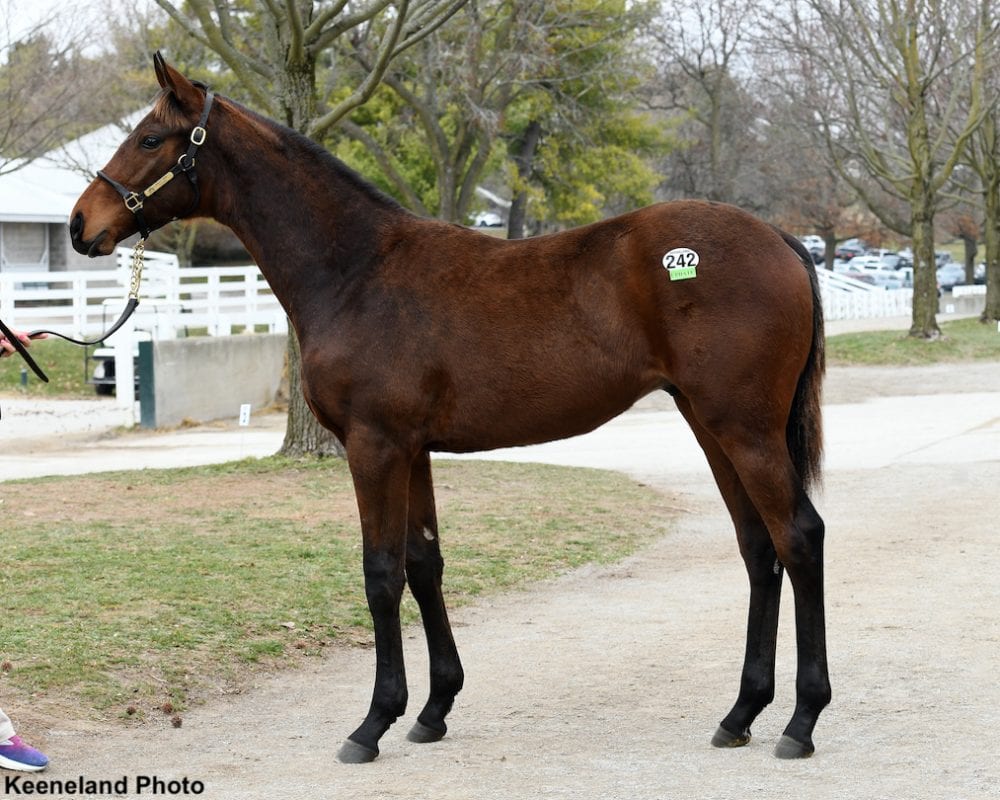 It was going to be hard for the day-one figures at the 2020 Keeneland January Horses of All Ages Sale to top last year's leadoff session after champion Abel Tasman kicked off the 2019 edition with a record $5-million hammer price.

Despite that daunting challenge, the middle ground of the marketplace held relatively steady on Monday compared to last year's cork-popper, starting this year's Keeneland January sale behind the pace of 2019, but not by as much as it might seem.

The figure less swayed by Abel Tasman's bombshell was the median, which saw a drop of just 11 percent from opening session to opening session, resting at $35,000 after checking in at $39,500 last year. Monday's buyback rate wrapped at 29 percent, up from 26 percent.

Geoffrey Russell, Keeneland's director of sales operations, said a lack of a marquee dispersal or a record-threatening offering certainly affected Monday's numbers, but the rank-and-file trade remained reliable for the sale's standing in the marketplace.

“We always look to try and find an Abel Tasman every year or get a dispersal to add a little spice to the January sale; some years we're successful, some years we're not,” Russell said. “Without an Abel Tasman and her $5 million taken off the top, I think the rest of the catalog is a good, solid catalog. There are some nice broodmare prospects with some black type in there that sold pretty well, and the good yearlings were obviously well rewarded.”

A private sale brought the highest price of Monday's session, with Hunter Valley Farm, agent, landing the Congrats mare Applauding for $360,000 after the mare initially hammered under her reserve at $350,000.

The chestnut mare, offered as Hip 135, is the dam of two winners from as many runners, including the six-figure earner Nolo Contesto. She was offered in-foal to Curlin.

Applauding is out of the unraced Forestry mare Andria's Forest, and she is a full-sister to Starship Warpspeed, who has produced two graded-placed runners. On her own accord, Applauding won three of four career starts, including a nine-length debut score as a juvenile at Keeneland going six furlongs.

Two mares tied for the most expensive offering to change hands in the ring on Monday, each bringing $335,000.

The first was Hip 117, Zia, a stakes-placed Munnings mare who sold to Nicoma Bloodstock, agent.

The bay mare's first foal is a winner, and she was offered in-foal to Into Mischief. She is out of the unplaced Sadler's Wells mare Faux Pas, from the family of British champion Negligent.

“She's a nice mare, a young mare and there are seven fillies in production underneath her,” said Price Bell of Nicoma Bloodstock. “Nursery Place bred (graded stakes winner) Selflessly and then they went back and bought this mare's full sister for $240,000 in November. So we figured we'd give it a shot. (Dams in foal) to Into Mischief are tough to buy so we're excited to give it a shot. She's a nice young mare. (The price) felt like a fair market for January. There is quite a bit more depth to come so we were excited to try and strike early. Fingers crossed. We'll get her back to farm and figure out (her plans) from there.”

The 6-year-old Malibu Moon mare was offered as a racing or broodmare prospect. She's won four of 27 starts for earnings of $461,773, with victories in the listed Summer Colony Stakes and Iowa Distaff Stakes.

Moonlit Garden is out of the Grade 3-winning Roy mare Winter Garden, making her a half-sister to Grade 3 winner Title Contender and Grade 3-placed Matterhorn.

The demand for newly-turned yearlings was solid during Monday's session, and the head of the charge came from a pair of colts consigned by Denali Stud who accounted for two of the day's three highest yearling prices.

The dark bay or brown colt is out of the multiple Grade 2-winning Foxhound mare Foxysox, whose three winners from five runners includes the multiple stakes winner Curlin's Fox.

I thought he was exceptional, and I've had a lot of luck with Quality Road,” said Tami Bobo of First Finds. “I thought this was definitely the horse we needed and I'm looking forward to pinhooking him. He's beautiful, he's forward. He looks early. He looks like the kind of horse you want to take to Saratoga. If all the stars align, we'll try.”

Denali Stud consigned the colt as agent for Kentucky breeder Williamson Racing. The operation of Warren B. Williamson during her on-track career.

“He was a beautiful colt with a tremendous profile to him,” said Denali Stud's Conrad Bandoroff. “It didn't take much imagination to see what he could grow into. He was bought by a very astute judge, and it's definitely a compliment to the colt and how he was raised.”

The Quality Road colt picked up the baton from the early session-leader among the newly-turned yearlings, Hip 69, a first-crop Gun Runner colt who sold to Nick de Meric as agent for Klaravich Stables for $290,000.

The colt is the first foal out of the stakes-placed Any Given Saturday mare Sunday Sonnet, who is herself a half-sister to multiple Grade 3 winner Pianist. His extended family includes Irish champion Prince of Birds and Italian Group 1 winner Sudan.

“He's just a beautifully balanced, smooth, athletic-looking colt, an outstanding mover, and by a young sire that I think has a tremendously bright future,” de Meric said. “Gun Runner is already turning heads, and I think the best is yet to come for him.”

De Meric said he'd been in the hunt for a few other Gun Runner foals during the fall mixed sale season, but this was his first successful purchase.

“I think the same horse here in September could easily bring 30-40 percent more than he did today,” de Meric said. “Obviously, that's the play that we're gambling on – that we're not competing with the entire yearling buying public.”

The colt was bred in Kentucky by Hermitage Farm, and he was consigned by Denali Stud, agent.

“He really had a swagger about himself,” Bandoroff said. “He handled everything in stride, and was a really fun colt to have in the barn.”

“When we did our pre-sale inspection and looked at these two yearlings, we definitely got excited,” Bandoroff continued. “We had two serious bullets to fire, and both colts handled themselves really well while they were on the grounds, and you could tell as the buyers started coming back and going through their lists that these horses were making the cut. Both horses did their job really well and made our jobs a lot easier.”

Taylor Made Sales Agency finished as Monday's leading consignor by gross, with 55 horses sold for revenues of $3,583,900. de Meric Stables, agent, was the day's leading buyer, with five purchases totaling $712,000.

The Keeneland January sale continues daily through Friday, with each session beginning at 10 a.m. Eastern,