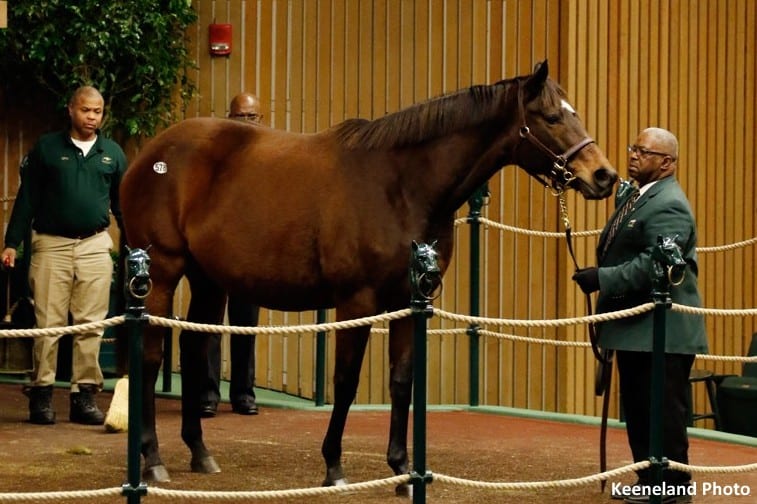 Multiple stakes winner Roan Inish, a daughter of Elusive Quality in foal to Arch, sold for $500,000 to Evelyn Benoit's Star Guitar Inc. to lead Tuesday's session of the Keeneland January Horses of All Ages Sale, which recorded double-digit increases in average and median for the second consecutive day.

“We lacked the two top prices from last year ($2.2 million and $800,000) and kind of knew going in that today's results would be affected by the withdrawal of two prominent mares,” Russell said. “But if you take out the two highest-priced horses from Day 2 last year, this year's second session is consistent and comparable. The average was up, the median was up.”

“They are going to breed her (to Star Guitar),” said Georgia Keogh, who signed the ticket on behalf of Benoit. “She's a beautiful mare.”

Benoit is acquiring mares for homebred Star Guitar, the four-time Louisiana-bred Horse of the Year and all-time money-earning Louisiana-bred with more than $1.7 million who stands at Clear Creek Stud in Folsom, La.

“The mare brought a lot more than we anticipated,” Bell said, “but that's what happens when you bring something up here that everybody wants.”

The day's second-high seller is the 5-year-old Distorted Humor mare Veracity, who brought $460,000 from Mike Ryan, agent for Fifth Avenue Bloodstock. By Distorted Humor, Veracity is out of multiple Grade 2 winner Yell, by A.P. Indy, and is a full sister to stakes winner Cheery. Her third dam is Broodmare of the Year Glowing Tribute, dam of Kentucky Derby (G1) winner Sea Hero.

She was consigned as a broodmare prospect by Buck Pond Farm (Douglas S. Arnold), agent for Preston Madden.

“(The buyer) is domestic, bought some yearling fillies this year and wants to develop a quality program,” Ryan said. “He's in it for the long haul.”

“The pedigree is exceptional,” Ryan said about Veracity. “These kind of families don't come on the market very often. It's one of the probably top four or five families in the country. She could be a foundation mare, and that's what (the buyer) is looking for. We knew we'd have to reach for her. These kind don't fall through the cracks – everybody sees them – but she was pretty special.”

Polo Green Stable, agent for Shimokobe Farm of Japan, paid $450,000, the session's third-highest price, for Canadian champion Conquest Harlanate. Lane's End, agent, consigned the 4-year-old, graded stakes-winning daughter of Harlan's Holiday who was Canada's champion juvenile filly in 2014. Sold as a broodmare prospect, she is out of the Dixieland Band mare Allison's Pride and from the family of Grade 1 winner Clear Choice.

“This mare is going to stay here in the United States and will be bred to (2015 Triple Crown winner and Breeders' Cup Classic-G1 winner) American Pharoah,” said Nobu Araki of Polo Green Stable, who signed the ticket. “(The buyer) really wanted this filly. Physically, she's got a great head, beautiful face, great shoulder. She's got the class. We're very happy.”

Dominic Brennan, agent for Highland Yard LLC, paid $420,000 for the stakes-winning Speightstown mare Mother Ruth, in foal to Will Take Charge. Also consigned by Lane's End, agent, the 10-year-old mare is out of stakes winner Seven Four Seven, by Colonial Affair, and from the family of Grade 2 winner Debutant's Halo and Grade 3 winner Michael's Star.

“We race some and we sell some,” Lindsay LaRoche of Highland Yard said. “We tend to keep the fillies and sell the colts. We're building up a bit of a broodmare band and going to get about seven or eight quality broodmares, and we think we did that here.

“She was all class. Perfect conformation. Perfect walk,” LaRoche added. “Hopefully, that traces through to her babies and we'll have a good broodmare here. This one we love, and we'll see how we do.”

At $250,000, the session's top-priced yearling is the colt by 2015 leading first-crop sire Uncle Mo purchased by Steven W. Young, agent. Consigned by Warrendale Sales, agent, he is out of the winning Silver Ghost mare It's Spooky and is a half-brother to Grade 3 winner Rerun.

“Couldn't be a bigger fan of Uncle Mo right now,” Young said. “The (yearling) is a super individual and I hope he's brave and lucky. He's a very nice horse. He was bought for a man that races and I imagine that's what we'll do.”

The leading buyer was de Meric Stables, agent, who purchased four horses for $730,000.

The January Sale continues through Friday. Sessions begin daily at 10 a.m. ET. The entire sale is streamed live at Keeneland.com.