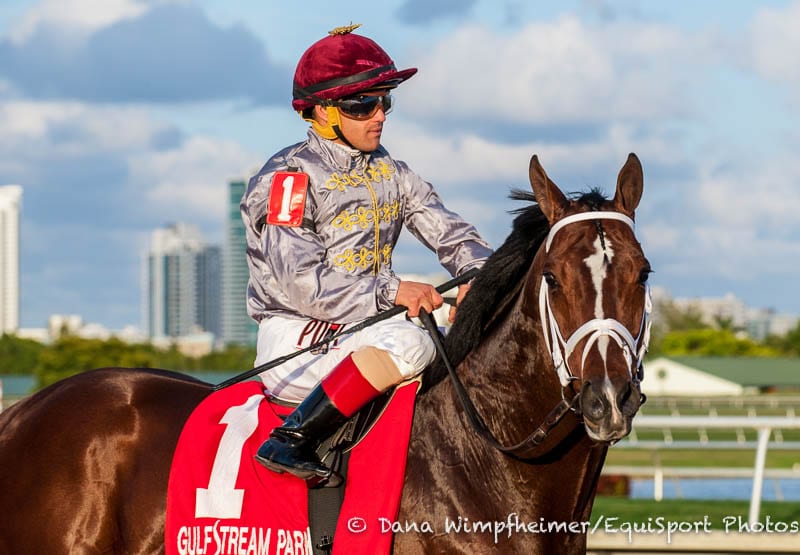 Swettenham Stud has announced that Mshawish, the dual Group 1 winning son and highest earning entire of champion Medaglia d'Oro will be joining their stallion roster in 2017.

A coup for Victorian breeders, Mshawish will be standing at Swettenham Stud in partnership with Al Shaqab and Taylor Made Farm.

Swettenham Stud owner, Adam Sangster has forged a relationship with the Qatari racing organization, having the outstanding stallion Toronado stand at his premier Nagambie farm for the last two years. With Mshawish joining the 2017 stallion roster, together they raise the bar to another level.

“Mshawish represents another top-class stallion to come to Victoria. This is indicative of the confidence and strength of the Victorian Industry when International entities like Al Shaqab and Taylor Made are willing to send stallions of Mshawish's caliber. We have had great support for Toronado from the Australian breeders so I am really excited to present Mshawish to them. He's a lovely type of Stallion with the physical presence we all look for when choosing a mating, being the preeminent son of Medaglia D'Oro just caps it off.”

“We are thrilled to have the opportunity to partner with Adam Sangster in shuttling Mshawish to Swettenham Stud. Australia is arguably the most lucrative thoroughbred marketplace in the world at present where the excitement and prize money for horse racing is second to none.”

“Medaglia D'Oro has been very successful from limited opportunities in Australia and we believe having his best son at stud there provides breeders a great option to breed to this emerging sire line. Mshawish is the definition of a successful, truly international racehorse running in graded stakes races in five different countries.

This partnership gives him a great opportunity to become an international sire and hopefully the next great dual-hemisphere stallion,” endorsed Duncan Taylor, President & CEO of Taylor Made Stallions.

Mshawish retired with nine wins from 24 starts and earnings of over AU$3.1 million. An elite, versatile and sound five-time Group race winner on multiple surfaces over distances from 1500m to 1800m, he has defeated more than half a dozen Group 1 winners around the globe.

With Medaglia d'Oro being one of the top stallions in the world, Mshawish is his most accomplished son. Mshawish joins Horses of the Year California Chrome and Wise Dan as the only North American males to win Group One races on dirt and turf in the last decade.

Trained by Todd Pletcher, Mshawish captured the G1 Gulfstream Park Turf Handicap before victory in the G1 Donn Handicap on dirt. Powering clear in the Donn, the phrase “Like father, like son” was spot on when Mshawish emulated his sire Medaglia d'Oro, winner of the 2004 Donn. Medaglia d'Oro was tough and durable himself, being five when he won the Donn Handicap and his progeny show that he passes that resilience on.

“Mshawish always impressed me with his versatility, high-cruising speed, and neat ability to also have an exciting turn of foot,” Pletcher said. “He was top-class on both surfaces. I look forward to training his babies a few years down the road.”

Khalifa Al Attiya, Executive Director of Al Shaqab Racing comments, “It is so important to us that we not only race good horses but that we also produce stallions. Therefore, we are very proud that we have exciting young sires on our roster all around the world, with the hope of many more to come.”

Mshawish is keeping elite company with other stallion sons of Medaglia d'Oro in Australia. Brilliant Sydney galloper and Group 1 Golden Rose winner Astern has now been retired to stud in NSW, along with the Group 3 Gold Coast Guineas winner Nostradamus, and Golden Slipper winner Vancouver standing this season in the Hunter Valley.

As the sire of Mshawish, it was significant Medaglia d'Oro had such an outstanding Inglis Easter Yearling sale, topping the sale with the stunning $2.4 million dollar colt from the stakes winning mare, Hoss Amor. From his 19 lots sold, he held an impressive $341,0000 average.

The Australian breeding industry certainly showed their support with deep pockets, demonstrating the importance of this sire bloodline in future breeding stock and forthcoming success on the track.

A well-performed dam line, Mshawish is out of the mare Thunder Bayou, by Thunder Gulch from the immediate family of multiple Group 1 winning champion two-year-old filly, Halfbridled and Group 2 winner, Lu Ravi. His second dam Bayou Storm is by Storm Cat and produced stakes winners Meteorologist and Bayou Breeze. At The Half, his grand dam was a Group 3 winning juvenile by Seeking The Gold and dam of La Ravi.

Swettenham Stud is looking forward to seeing Mshawish pass his looks, ability, toughness and consistency onto his progeny. Without a doubt, he is an exciting horse to introduce to breeders around the country.

Mshawish will provide outstanding value in comparison to other sons of Medaglia d'Oro sons at stud. Vancouver's 2017 stud fee is $49,500, while Astern will stand at $38,500.

Swettenham Stud is committed to giving their breeders every opportunity to access a dual Group 1 winning son of Medaglia d'Oro, and will stand Mshawish for a realistic fee of $16,500.

For any enquiries regarding Mshawish please contact Adam, Brian or Rachel on 03 5794 2044.