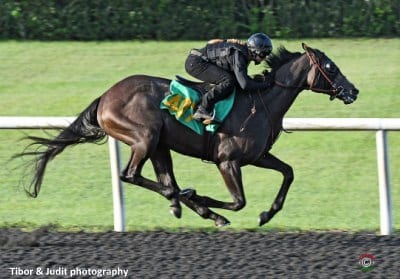 Hip No. 407, Sexyama, a gray or roan filly by Cairo Prince consigned by Halcyon Hammock Farm, Agent, breezed three eighths in :32 3/5 to post the fastest work at the distance at the second session of the Under Tack Show for the Ocala Breeders' Sales Company's 2018 June Sale of Two Year Olds in Training and Horses of Racing Age. She's a half sister to stakes placed Cowboy Cool out of Academie D'Amour, by Royal Academy. As a testament to the OBS surface, the session concluded on a dry track despite an interruption by heavy afternoon showers.

Hip No. 402, a chestnut colt by Fed Biz consigned by Potrero Stables, Agent, turned in the sesssion's fastest quarter, clocked in :20 3/5. He's out of You Laughin, by Sharp Humor, a half sister to grade one winner Sweet Reason.

Two horses shared honors for the day's fastest eighth, stopping the timer in 9 4/5.

There were eleven eighths in :10 flat.

Under Tack results and videos are posted on the OBS website at obssales.com and can be viewed on kiosks in the breezeway and in the Video Room adjacent to the Horsemen's Lounge. In-room viewing is available at The Courtyard by Marriott, Homewood Suites, Hampton Inn & Suites, Residence Inn and the Ocala Hilton, plus lounge viewing is available at the Hilton.

Current information about OBS sales, consignors and graduates is now also available via social media sites Facebook and Twitter. A link on the homepage directs users to either site.

Sales results will be available on the OBS website, updated hourly during each session of the Spring Sale. In addition, the latest news regarding OBS graduates, sales schedules, nominations, credit requests, travel information and other news relevant to OBS consignors and customers is also available. E-mail should be addressed to [email protected].