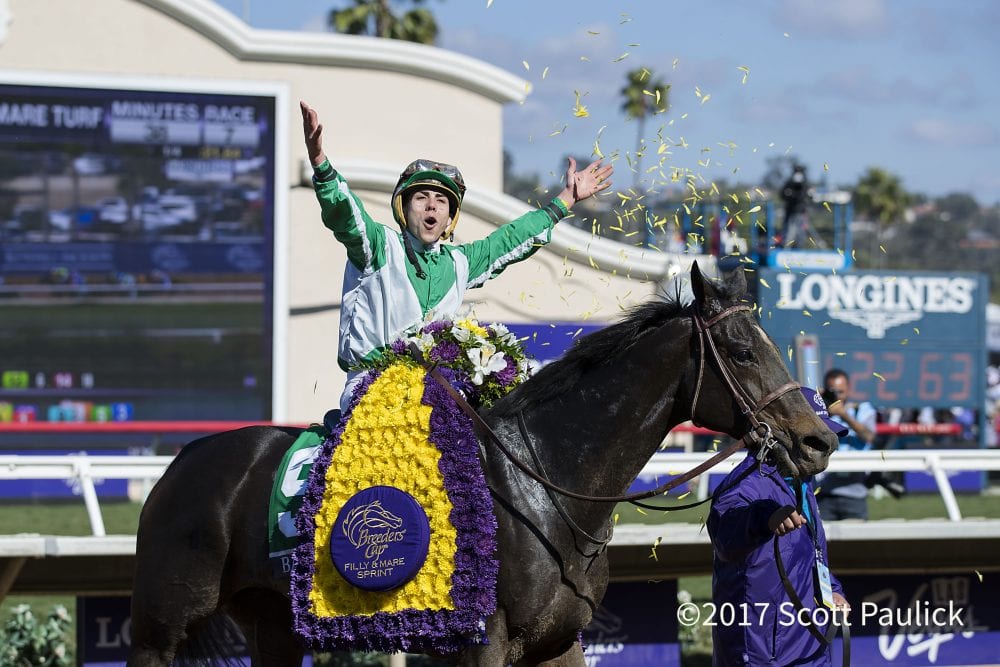 When the top New York breeder and New York-bred horse of the year were announced at the annual awards banquet of the New York Thoroughbred Breeders, Inc. (NYTB), the names were familiar. Chester and Mary Broman were named the state's outstanding breeders for the second straight year and fifth time overall. Mind Your Biscuits, the 2016 New York-bred horse of the year, was once again the voters' pick for the top honors in 2017.

NYTB's awards banquet was held on April 9, 2018, at the Saratoga National Golf Club in Saratoga Springs, N.Y. Sponsored by the New York State Thoroughbred Breeding and Development Fund, the event was emceed by Richard Migliore, a former champion New York jockey and now a racing analyst for XBTV. All New York-bred divisional champions and horse of the year were chosen by a ballot of New York turf writers, handicappers, chart callers and racing analysts conducted by NYTB.

Chester and Mary Broman, whose names are synonymous with New York breeding and racing success, won seven stakes races in 2017 with their homebreds, led by Bar of Gold who ran a huge race at odds of 66-1 to win the Grade 1 Breeders' Cup Filly and Mare Sprint at Del Mar. Highway Star, another Broman standout, took the Grade 2 Ruffian Stakes, Gallant Bloom Handicap and Grade 3 Distaff. Haul Anchor and Held Accountable also picked up stakes victories last year. In all, the Bromans won 71 races with their New York-breds and earned $3,746,914 in purses. The couple won the outstanding breeders award previously in 2004, 2011, 2014 and 2016.

Horse of the Year Mind Your Biscuits (Posse), who was bred by Jumping Jack Racing LLC, won his second start of 2017 on the biggest stage of all, when he scored a wide-trip much-the-best victory in the Group 1 Dubai Golden Shaheen at Meydan Racecourse. In July he also won the Grade 2 Belmont Sprint Stakes. The chestnut cemented his claim to excellence just last month when he repeated in the Golden Shaheen and became the richest New York-bred in history with earnings of $3,719,286, overtaking the mark of $3,529,412 set by Kentucky Derby winner Funny Cide. Chad Summers, who trains Mind Your Biscuits, is also a co-owner in a partnership that consists of Head of Plains LLC, J Stables LLC, Michael Summers, Dan Summers and Michael Kisber.