Equibase Analysis: Delaware Handicap Could Be Ripe For Upset 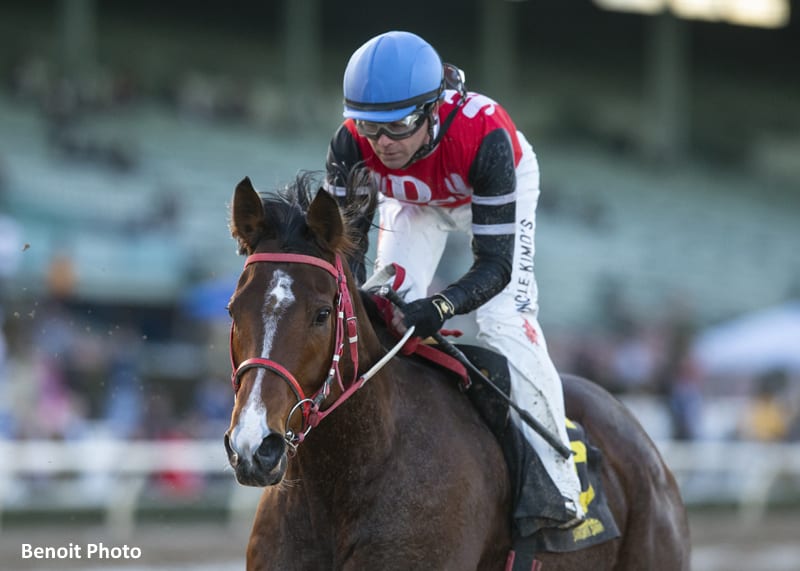 The Grade2, $750,000 Delaware Handicap brings together a strong group of older fillies and mares with seven of the nine attempting the mile and one-quarter distance for the first time in their careers. One horse who is proven at the distance is likely betting favorite Elate. She won this race last year and is attempting to repeat the feat of champion Royal Delta, who won the race back-to-back in 2012 and 2013. Elate enters the race off a win in the Grade 2 Fleur De Lis Stakes last month, beating Blue Prize (ARG) by a length and one half.

Blue Prize (ARG) earned her biggest win last fall in the Grade 1 Spinster Stakes and is making her third start since returning from a six month layoff so she has a chance to improve off her last effort. Escape Clause is a well-travelled mare who has run over eight different tracks in the past year. She finished in front of Elate when second earlier this year in the Grade 1 Apple Blossom Handicap so must be considered a contender as well. Gotham Gala is a lightly raced four year old who, like Blue Prize (ARG), is making her third start following six months off. She won the Obeah Stakes last month over the track and may have potential to post the upset. Another Broad won the Top Flight Invitational Stakes in April in New York but has only managed fourth and third place finishes since then, most recently in the Obeah.

Goodonehoney beat Another Broad by a head for second in the Obeah, previously finishing on top in the Serenas Song Stakes but disqualified and placed third for interference. Promise of Spring is stakes placed twice this year, first when second in the Grade 3 Bayakoa Stakes and then when third in the Grade 3 Doubledogdare Stakes, but may be a cut below this grade 2 stakes level. Queen Nekia and Vente to Go round out the field of nine.


Gotham Gala has good upset potential in this race. She started her career on turf, went zero for two, then moved to dirt where she won by 12 lengths last September. Two races later she won again, followed by a poorer effort which led to a six month layoff. After a third place finish in a two-turn race in May without a sprint prep first, Gotham Gala was entered in the Obeah Stakes. She cruised in front from start to finish, earning a career-best 94 EquibaseSpeed Figure which was an eight point improvement off her previous effort.

Gotham Gala has the breeding to handle the 10-furlong trip of the Delaware Handicap as a daughter of Smart Strike so there are no concerns there. Although she led from start to finish in the Obeah, Gotham Gala proved last year she can come from off the pace to win. Jockey Danny Centeno has been aboard for all three of her career wins and rides in this race. From an inside post Centeno can take the early lead if no other horse wants it, or horse and rider can sit off the pace and rally in the stretch. Considering favorite Elate earned a 99 figure winning the Fleur de Lis last month, with logical improvement off the 94 figure effort Gotham Gala put forth last month, she can run as well as or better than the favorite to win this year's Delaware Handicap.

Escape Clause is another upset possibility if she can repeat the effort she put forth in the Apple Blossom Handicap in April. In that race, Escape Clause stalked in second, took the lead on the far turn and held it to just near the wire, coming up a nose short to Midnight Bisou. Midnight Bisou returned to win the Ogden Phipps Stakes last month, a race in which Escape Clause was a well-beaten fourth. The 115 figure Escape Clause earned in the Apple Blossom is nearly as good as the 119 figure Elate earned winning the Personal Ensign Stakes last summer and the 117 figure Blue Prize (ARG) earned winning the Falls City Handicap in the fall of 2017. The longer distance could help Escape Clause run back to her Apple Blossom effort. This is because she finished third, beaten only one length, in the 11 furlong Red Carpet Handicap on turf last fall. Having put in two workouts at Delaware Park, the first of which was a rock solid second best of 70 on the day at the distance of four furlongs, Escape Clause must be strongly considered a contender in this race.

Elate would go over the $2 million mark in career earnings with a win in the Delaware Handicap, having banked $1.69 million to date while winning six of 15 races and finishing second in five others. She won the 2018 edition of this race following eight months off and earning a 110 figure. She could run even better this year as she has three races under her belt, most recently winning the Fleur De Lis Handicap last month with a 99 figure. She earned 105 and 111 figures, respectively, in the Azeri Stakes and Apple Blossom, although she was no threat to win either. However, back in winning form and having won back-to-back grade 1 stakes in the summer of 2017, Elate could be formidable in this situation.

Blue Prize (ARG) is a tough competitor who has been first or second in 15 of 19 races, earning $1.1 million in the process. She put together three straight graded stakes wins last year, including the Fleur de Lis, before a fourth place effort in the Breeders' Cup Distaff. Her two races this year have been okay but not great. She first finished third in the La Troienne Stakes in May with a 99 figure then regressed slightly to a 97 figure when beaten a length and one-half by Elate in this year's Fleur De Lis. As such, I think Blue Prize (ARG) can be a contender for a minor award and should be considered for exacta and trifecta tickets in this race, but it may be difficult for her to beat any of the three previously mentioned contenders.

The rest of the Delaware Handicap field, with their best representative Equibase Speed Figures, is Another Broad (93), Goodonehoney (89), Promise of Spring (101), Queen Nekia (87) and Vente to Go (93).