‘The Lucky Ones’: Thoroughbred Welfare Group Offers Look Inside The Aftermath Of I Care I Help

The National Thoroughbred Welfare Organization (NTWO), a 501(c)3 non-profit, is asking the public for help in caring for “the lucky ones” — a handful of the few living horses remaining from the aftermath of I Care I Help.

The Paulick Report first began reporting on the activity of I Care I Help in April 2018, at which time the group had crowdsourced donations ostensibly to save, rehabilitate and rehome horses from the slaughter pipeline. The organization was not a tax-exempt 501(c)3 despite advertising itself as a “non-profit”, and donations were primarily funneled to founder Dina Alborano's PayPal account. In August 2018, NTWO released a follow-up piece raising red flags about the condition of horses in the care of Hal Parker, the Louisiana-based horseman charged with caring for I Care I Help. Parker has since been arrested and hit with multiple animal cruelty charges for his treatment of the I Care I Help horses.

In a Facebook post published Tuesday, NTWO claims nine horses were seized by the Union Parish Sheriff's Department at the time of Parker's arrest. Three horses died within days or weeks of seizure from illness and malnutrition. Five other horses, which the group names as Amy's Queen, Play the Field, Prowalker, and two unidentified chestnut geldings, have been released to the care of NTWO. The horses who have been identified were among those Alborano raised money to purchase in 2018, according to her social media, to save their lives.

NTWO estimates it will cost the organization just under $6,000 to get the five horses to its Kentucky base, since the group will be on the hook to pay for the board the horses have accumulated at a local facility in Louisiana since their seizure earlier this year, in addition to transportation costs.

According to the post, Alborano has laid claim to one of the nine seized horses, a draft cross named “Daisy,” who is not being released to NTWO.

A screenshot shows a 2018 post from Alborano's social media

The NTWO Facebook post also shows at least one post from Alborano in 2018 claiming Play the Field and one other horse (who was seized by the sheriff but later died) were adopted and “with new owner Shawn.” 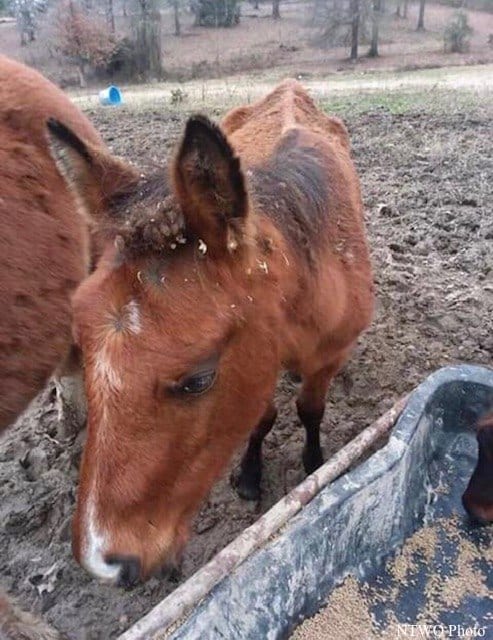 Felonious Friend, an OTTB purchased by Alborano, shown in a state of neglect at the time of his seizure. Felonious Friend later died of illness and malnutrition

One particularly graphic video, purportedly evidence taken as part of the investigation into Parker, shows a field full of equine corpses in various states of decomposition. Various estimates have Alborano purchasing well over 100 horses in 2018, with more than 50 remaining without posts from Alborano or Parker announcing their adoption or whereabouts as of August 2018. Authorities now say all horses have been accounted for, alive or dead.

Alborano, based in New Jersey but who claimed to make regular visits to see the horses in Parker's care, has not been charged.