The Six-Dollar Earplugs That Brought Us A Triple Crown 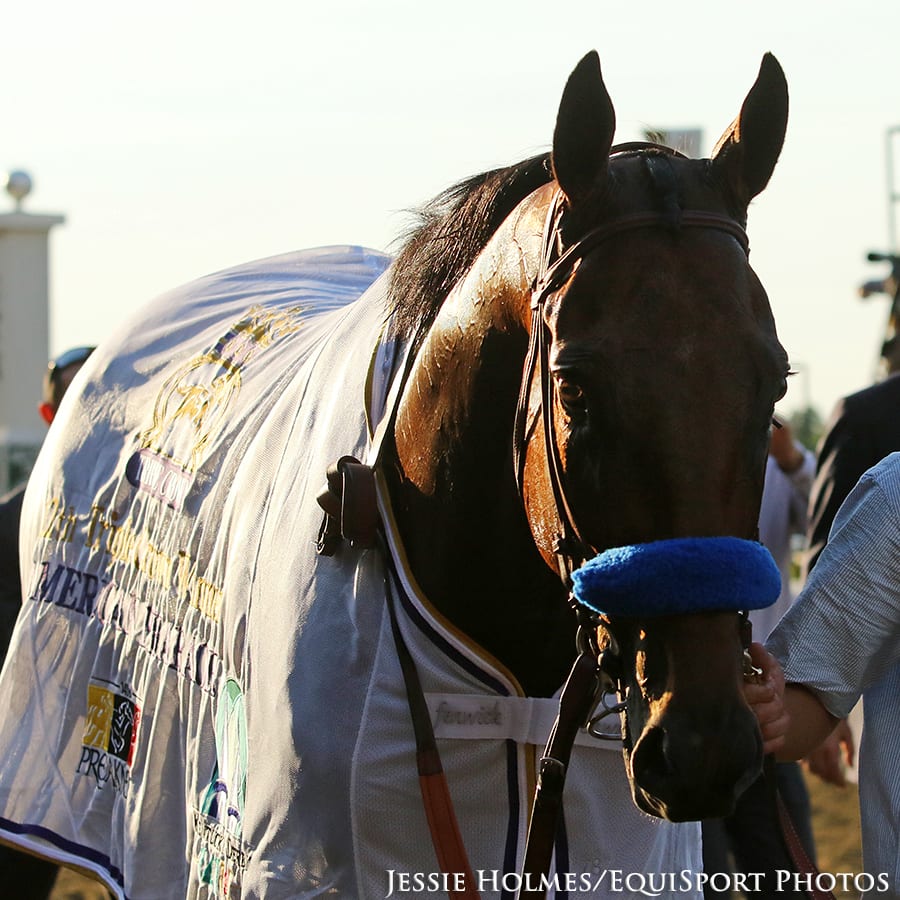 When American Pharoah crossed the Belmont Park finish line in 2015, NBC camera crew members said the roar of the crowd was louder than any other sports event they had filmed to that point. To the plain bay colt at the wire, though, the sound was probably a muffled buzz.

Trainer Bob Baffert believes a $6 pair of equine earplugs made all the difference for American Pharoah's 3-year-old season.

Baffert still has the pair of sheepskin ear plugs American Pharoah wore that June day framed in a shadow box on his office wall.

“Some horses are very sensitive to loud sound,” said Baffert, who remembers the colt spooking when a tractor started up near him early in his career. “American Pharoah, he always had them in when he came out of the stall. You'd put them in, and it was night and day. He'd just chill. We never took them out.

“Six dollars made a big difference on a Triple Crown horse.”

The one time Baffert remembers American Pharoah leaving his stall without his earplugs, the trainer noticed right away. A car drove by the barn and rattled slightly, and the colt immediately tensed. The plugs went back in, and the colt settled back down right away.

The racetrack can be a loud environment for horses even outside historic races like the Belmont or Breeders' Cup, and a bustling backstretch can be full of unpredictable noise, too. Researchers say horses can pick up sounds from farther away than humans and can also register a greater variety of sounds than we can, including many higher-pitched noises. Horses have likely developed these abilities because they evolved as prey animals, but they're not so convenient in a human-centric setting as they are out on the range.

Runners in Japan are sometimes spotted with hoods that cover their ears to help filter out sound; in the sport horse world, similar devices have been used to pipe music into a horse's ears for relaxation. Ear plugs, whether foam or fabric, have been common in American Standardbred racing for years and have their place in some show horse disciplines. Baffert said he's even heard of Standardbred drivers reaching up and pulling a string to remove ear plugs as the horses turn into the stretch. That gave him an idea for their use with his horses. Assistant and exercise rider Dana Barnes sews pairs of sheepskin earplugs together with a string to give the option of removal after the post parade.

“I've found that not all horses like them, but it serves its purpose as a calming effect, especially for big days when there's a crowd and everything,” Baffert said. “I think it just drowns out a little bit of the noise. We don't stuff them in there real deep. A lot of horses, if they shake their heads, they'll pop out.”

Baffert has used earplugs on several high profile horses, including Eclipse Award winner Arrogate and Kentucky Oaks winner Abel Tasman. Not every horse needs or benefits from them, and Baffert relies on feedback from exercise riders to know whether a horse has become too relaxed or dull from wearing earplugs. Baffert has also had to do some experimentation to decide when earplugs need to go in and when they need to come out.

“When we went to Dubai, Arrogate had his earplugs and it was rainy and really windy. He was in the gate and he had his earplugs, and they don't have a bell. We were thinking later we should have taken them out,” he said. “But he didn't break well, and I don't think it was because of that. He had a handler who stepped back right before. There was a lot of stuff going on there.”

Baffert has not determined whether Arrogate's ear plugs will stay in for his next race or be used for the paddock/post parade only. Abel Tasman wears the plugs on the way to the gate but not for the break. Mike Smith removes them just before the filly loads and either hands them to an outrider or stuffs them in his breeches to return to Baffert stable staff. Keen observers of the Grade 1 Coaching Club American Oaks in July noticed Smith removing an item from his clothing and handing it off to Baffert staff, which New York officials later confirmed was Abel Tasman's set of earplugs.

Baffert is far from the first trainer to use equipment to shield a horse from excessive noise. Zenyatta became famous for the cotton trainer John Shirreffs tucked into her ears ahead of races. Baffert started American Pharoah off with cotton but didn't like the aesthetics of the bright white sticking out against dark ears, so he opted for the sheepskin earplugs because they come in brown or black to match the horse. At this point, ear plugs are not officially-declared equipment, so railbirds need to keep a sharp eye on horses' heads to know if they're in use.

“I bought all kinds of different earplugs. I finally came upon these sheepskin ones, they're really soft and fit really well in the ears. I wanted it to blend in,” Baffert said. “I've had a lot of trainers asking where I got them. I think they're using them but you don't see them.”