How Old Is ‘Old’ For A Thoroughbred? 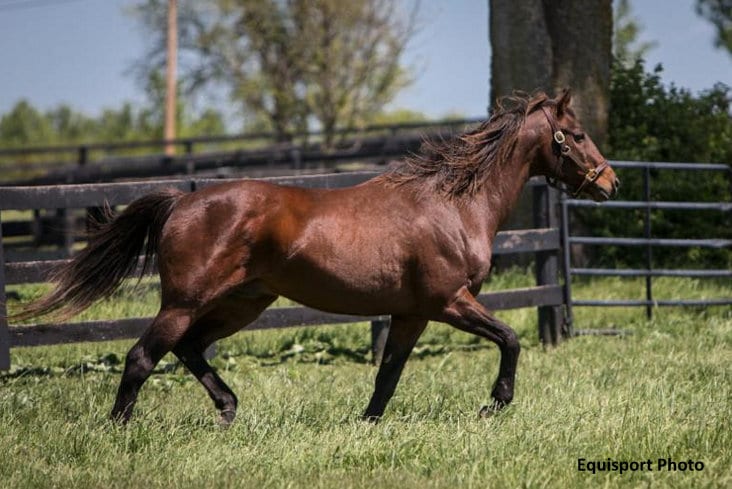 Every year brings a handful of death announcements as stallions and broodmares succumb to “the infirmities of old age.” Whether the horse in question was in their early or late twenties, we usually get questions – doesn't say, 25 years old sound young for a horse? And what exactly are the “infirmities of old age”?

Just as for people, there's no hard and fast answer to the question of how long a horse can be expected to live. Generally speaking, ponies and miniature horses can live significantly longer than the average riding horse, and it's not uncommon for them to reach their early or mid-thirties. Riding horses like Thoroughbreds and Quarter Horses begin to show their age in their late teens or early twenties, though may live well beyond that. The oldest horse in the history books, according to The Horse magazine, was Old Billy, a barge horse born in 1760 who lived to be 62. Old Billy is the exception rather than the rule, with most riding horses living to be between 20 and 30. Draft breeds, much like large dog breeds, usually have a slightly shorter lifespan due to their size.

“I figure once they get to be about thirty, every day is a gift,” said Dr. Bryan Waldridge of Park Equine Hospital.

Waldridge treats the residents of Old Friends in Georgetown, Ky., which always includes some number of geriatric Thoroughbreds. Unsurprisingly, Waldridge said, a horse's life expectancy also has a lot to do with their health history. Horses coming off the racetrack with more wear-and-tear injuries may see those injuries flare into problematic arthritis more quickly and viciously than those that retired sound. Past illness can also leave a horse susceptible to complications later; a horse that has recovered from kidney disease may be more vulnerable years later to a recurrence, as is true for colic. There are also individual differences; some horses are more sensitive than others to environmental changes that could cause colic.

Waldridge also believes genetics and attitude have something to do with it.

“I think some people just genetically live longer and I think it's true in horses,” said Waldridge. “Gulch looked like he was going to live forever until he got cancer and then it was over in no time. He was one of the oldest, toughest horses I ever saw.”

Gulch, a longtime resident of Old Friends, was euthanized in 2016 at the age of 32.

As with people, the death of an older horse can be the sum of one or more gradually worsening problems, rather than one, acute bout of illness (with the obvious exception of colic), hence the vague phrase “the infirmities of old age.” According to a study of deceased horses 15 years old and up from the University of Kentucky's Veterinary Diagnostic Laboratory, the causes of death for most geriatric horses were disorders of the digestive system and those of the cardiovascular system. About half the cardiovascular cases were caused by a uterine artery rupture, which is considered one of the possible complications for broodmares 15 years of age and up. Most digestive issues likely manifested as colic, which is still the most common cause of death for all horses.

Fifteen years old is also recognized as the benchmark for increased risk of a certain type of intestinal lipoma, a fatty tumor, that can cause fatal colic. Colic generally gets more common with age, and risks associated with anesthesia become more serious as a horse ages, so surgeons are less inclined to operate on colic cases in their late teens and early twenties.

Cardiovascular issues become more common because with time, walls of the heart valves become thickened and the valves can sometimes fail to close properly, allowing blood to leak through the valves, which makes the heart work harder. Waldridge sees a fair number of deaths from congestive heart failure for this reason in older horses.

Aging grays are also at increased risk for skin cancer. It's fairly common for gray horses to develop tumors on their faces, necks, or around the rectum. Most of those tumors are not problematic on their own but can pose challenges if they begin interfering with an organ's function.

“Unlike humans and dogs, they don't tend to be malignant in horses but where they are, they tend to cause trouble and they really like the hind end, so a horse can't pass manure,” said Waldridge. “I've seen them get so big the horse couldn't raise their tail to pass manure.”

A horse's teeth, which are constantly erupting through their gums throughout their lives, may also begin to wear down or fall out as they age, making it more cumbersome to chew tough feedstuffs like dry hay or grain. Additionally, older horses struggle to maintain weight during periods of extreme cold, even when fed appropriate diets.

A horse with any level of athletic function is at risk for developing arthritis as they age, and this can progress to the point it interferes with a horse's day-to-day function, especially if the horse is already dealing with other illnesses.

All this means owners and managers often must weigh an older horse's “infirmities” with his quality of life.

“My definition that I always tell people is that when they can't walk around and eat grass pain-free anymore, then to me, it's time to think about euthanasia. If they can walk around and eat grass all right, they're pretty happy,” said Waldridge, who emphasized a horse that lives to 23 is not necessarily receiving inferior care to one that lives to 30. “I think you can't do anything about genetics. If they've had some serious problem in their past, it may ding them somewhere and make them where if they get an injury or illness in the same body system, it'll hit them harder. It's genetics and what's happened to them their whole life leading up to that point, it doesn't mean anyone's done anything wrong.”