For Farriers, A Talented Racehorse Can Sometimes Be A ‘Quirky’ One 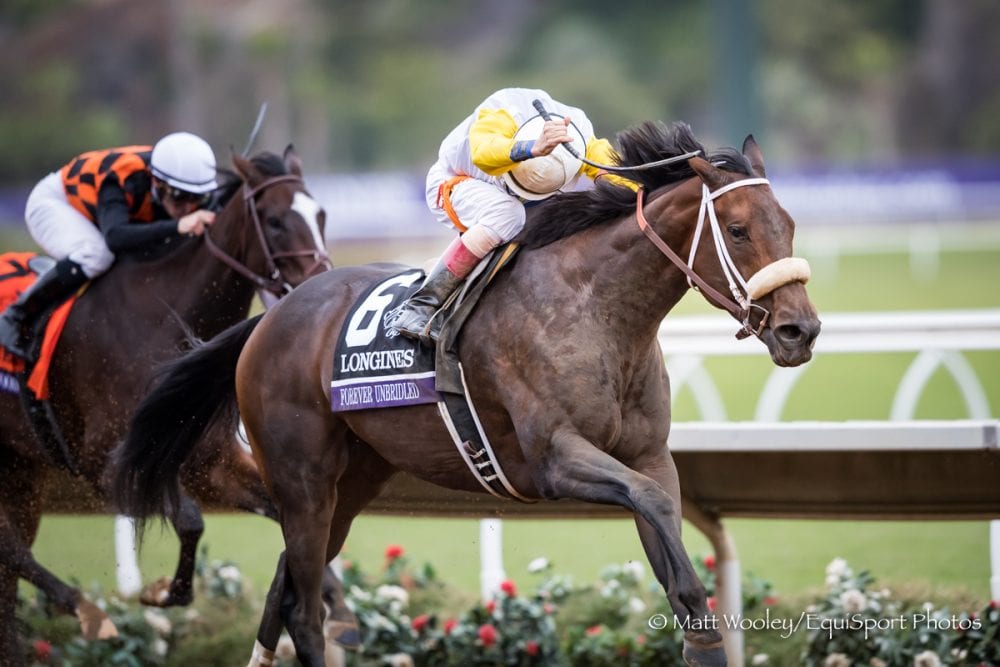 No matter how many hundreds of horses a racetrack farrier shoes over the years, there will be that one horse that stands out—some not for the best of reasons. Being politically correct, farriers often call these horses “quirky.” Most are superstars of the track, so their idiosyncrasies are indulged as long as they keep winning. As we tick down the minutes to Kentucky Derby post time, a few farriers looked back at their most quirky clientele who ran for lilies, roses, and other classic prizes.

Pat Broadus is the farrier whose shoes supported Forever Unbridled throughout her Eclipse Award-winning career. And it wasn't a walk in the park.

The champion Older Dirt Female captured the Grade 1 Apple Blossom Handicap at Oaklawn Park and the Beldame Stakes at Belmont Park in 2016. She kept the steamroller going in 2017 with a seven-wide, last-to-first drive in the G1 Personal Ensign Stakes at Saratoga Racecourse, then culminated her campaign with a nail-biting come-from-behind finish in the Breeders' Cup Distaff at Del Mar.

“Normally on every racehorse I do, I start on the left front foot because that's the most comfortable spot for them because everything is done from the left shoulder on a racehorse,” Broadus said. “But not her. You had to start with the right front with her up against the wall. After you did that, you could shoe her out in the middle of a highway. If you didn't, it was a fight.”

When Forever Unbridled started this behavior as a 2-year-old, the first thought was that she had a hidden foot problem, but Broadus found that was not the case.

“There was nothing wrong with her foot. She had a beautiful foot, the prettiest you could imagine,” he said.

Broadus credits trainer Dallas Stewart and his staff for coping with all the mare's quirks, such as demanding an escort.

“She refused to go to the track without a pony,” he said. “She would stand outside the barn for 45 minutes until the pony came and got up next to her. Then she would go to the racetrack.”

The champion mare's last race was the 2018 Dubai World Cup at Meydan Racecourse, in which she finished an uninterested fifth. Despite the five-star accommodations for its celebrity runners, Meydan didn't meet Forever Unbridled's diva expectations.

“She was supposed to run good, but they said she didn't like it there,” Broadus said. “She didn't like the stalls and such. She's quirky.”

After the race, Forever Unbridled was retired to owner Charles Fipke's farm in Paris, Ky. On March 21, she foaled a Medaglia d'Oro colt. Farm manager Elke Krohn said the colt is quite a character, and he's good about having his feet trimmed. But he seems to have inherited his mom's quirkiness.

“He's just a very independent colt,” Krohn said, “And it scares [his mother] a bit because he just wanders off, and she tries to herd him back. He's not afraid of anything, and he always causes a ruckus when he does that. He's in a group, and he just kind of goes everywhere and tries to raise hell. Most of the mares are a little intimidated by [Forever Unbridled] because she's pretty big and strong. He's not afraid of people either. He'll come straight up to you. He's definitely not a coward, that's for sure.”

Tom Halpenny recently retired after caring for the feet of some of the best horses in the industry, including Zenyatta, four-time Eclipse Award winner and 2010 Horse of the Year. Looking back over his 50-year career, Halpenny said Racing Hall of Fame trainer Charlie Whittingham's Golden Pheasant, winner of the $2.77-million Japan Cup in 1991, was the weirdest to shoe.

“He was just quirky about holding his legs up too long,” he said. “All of a sudden, he'd just run backward. He wasn't mean or anything. You just couldn't hold him up too long, the minute you started pounding the nails into his feet. He never acted sore because he was a good runner. We thought maybe the banging bothered his ears or something. So we put cotton wool in his ears, and he still did it.

“Now if they act up, you just tranquilize them. Back in the day, you didn't expect a man like Whittingham to tranquilize a horse so you could work on him. He wouldn't do it, he just didn't do those things.”

So the only other way to cope with Golden Pheasant was just to go with him.

“Once you'd feel him move, then you'd let him put his foot on the ground for a little bit, and then you'd start again,” Halpenny recalled. “He was all right once you got a couple of nails in because then the shoe wouldn't move and you could finish him up. But he was just quirky about that.”

Steve Norman started shoeing in Nebraska in 1970. That's where he hooked up with the late, great horseman Jack Van Berg. He later met trainer D. Wayne Lukas there, and in 1985 Lukas brought him to Kentucky, where Norman gained the reputation as one of the best farriers in the racing industry.

When it comes to quirky horses, Norman said one stands out—War Emblem. The Bob Baffert trainee seemed destined to win the Triple Crown in 2002. He won the Kentucky Derby and the Preakness Stakes, but finished eighth in the Belmont Stakes after stumbling and being body-slammed by Magic Weisner at the break, then fighting rankly with rider Victor Espinoza for the rest of the race.

“War Emblem would try to bite you and try to kick you at the same time,” Norman said. “He was absolutely a rogue. He wanted to kill you.”

The horse would allow Norman to shoe only half of him; then he had to come back and do the other half the next day.

“It was crazy,” Norman said.

But Baffert's two Triple Crown winners, American Pharoah and Justify, have made up for it. Norman cares for both of them now at Ashford Stud in Versailles, Kentucky. 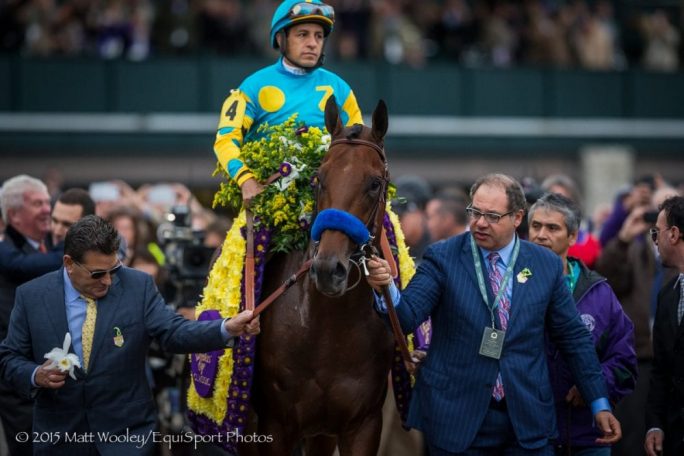 “American Pharoah — you can literally walk under and between his hind legs when you trim him,” Norman said. “He is a horse that does not move. He is an exception to the rule. He is the kindest horse I've ever been under trimming. When he comes out of the stall and he stands there, he'll stand square-up like he's supposed to, and he never moves. You can walk around him, pick his feet up, trim him. He is the kindest horse for being a stallion.”

Justify is deceptively huge, Norman said. The son of Scat Daddy is so perfectly put together and he moves so fluidly, he looks smaller until you get right up next to him.

“He is big, strong and when he moves, he could move a mountain,” Norman said. “That's how big he is. I got to shoe Curlin when he won the Preakness. Curlin was one of the biggest, nicest horses I've been around. But this Justify is unbelievable.

“His sire, Scat Daddy, was an aggressive horse. He'd hurt you if you didn't watch him. I think Justify is going to be the same way after a few years of breeding. I think he's going to get real aggressive.”

Ray Amato Sr. is the granddaddy of New York farriers. His son, Ray Jr., does most of the work these days, but Ray Sr. has had a long, illustrious career, teaming with Hall of Fame trainer Todd Pletcher in recent years.

Amato inadvertently took a ride on Triple Crown winner Seattle Slew one day…sort of. Co-owner Sally Hill asked Amato if he would take a look at Seattle Slew's right front foot, because his regular farrier was unavailable. 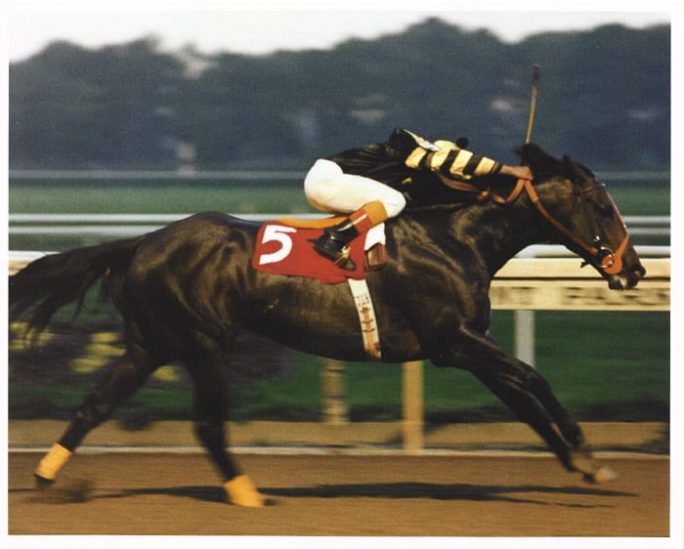 “My gosh, what a strong, strong horse he was,” Amato said. “He picked me up like I was a piece of paper, and in those days I was 5'11” and 215 pounds. I had his front foot between my legs, and he just picked himself up and took me with him. I tried to hold him to finish what I was doing, and he just picked me up. There was no use trying to fight with him. I've never forgotten how strong he was.”