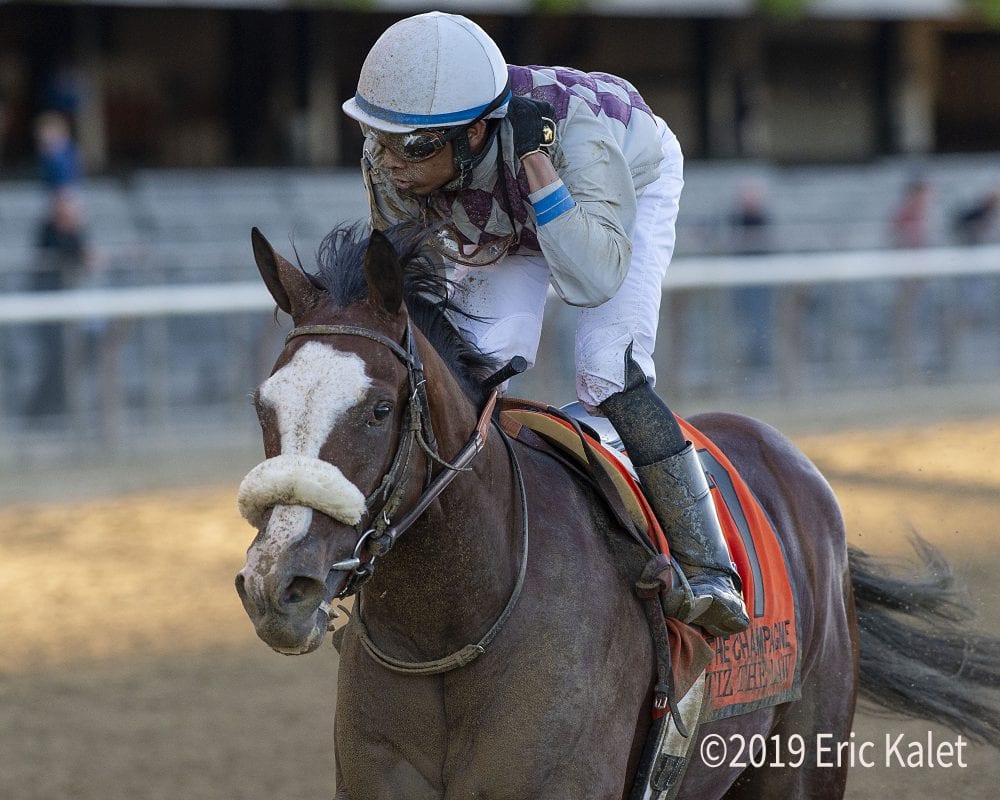 Tiz the Law, with Manny Franco aboard, after winning the 2019 Champagne Stakes

After a few weeks of light graded stakes action in the aftermath of the Breeders' Cup World Championships, things are busy once more across the nation. The Grade 1 Clark Stakes – the highlight of the Churchill Downs Fall Meet – has again assembled a competitive field while juveniles are in the spotlight beneath the Twin Spires in Saturday's Grade 2 Kentucky Jockey Club and Golden Rod Stakes. Del Mar also plays host to top-level action with the Grade 1 Hollywood Derby and Grade 1 Matriarch Stakes on tap this weekend. 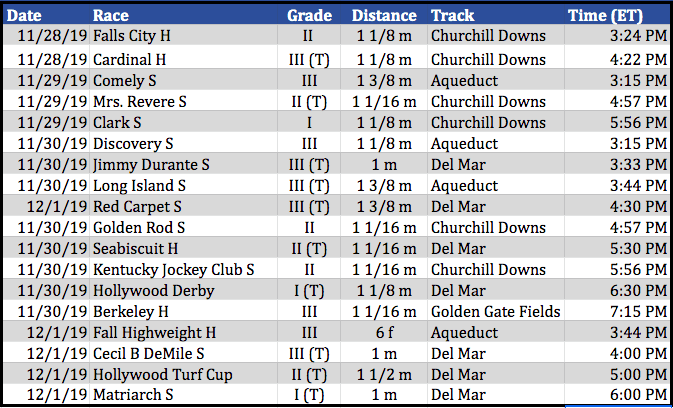 Performer, a winner of three straight races, has gradually climbed up the ladder in his last few starts and will take things up a notch when making his stakes debut in Saturday's Discovery over the main track. Trained by Hall of Famer Shug McGaughey, who saddled Gold Fever to a Discovery triumph in 1996, Performer was third in his career debut as a 2-year-old last November at Aqueduct before getting some extended time off. He returned a winner when breaking his maiden at Belmont Park by three-quarters of a length in June before defeating winners at Saratoga the following month recording a career-best 96 Beyer Speed Figure.

The Jimmy Durante Stakes attracted 14 two-year-old fillies for the one-mile turf run. The Chad Brown-trained Princesa Caroline, who broke her maiden by 3 ½ lengths in September, has been pegged as the early choice at 7-2.

Graded stakes winner Si Que Es Buena is one of three contenders from trainer Graham Motion taking aim at in the Long Island Stakes for fillies and mares three years old and up. Takaya Shimakawa's Si Que Es Buena made her North American debut last year at the Big A, where she ran fourth in the 2018 edition of the Long Island before winning the Via Borghese in December at Gulfstream Park. She followed with a one-length score in the Grade 3 La Prevoyante at the same track in January before Motion gave her nearly eight months off before returning to run sixth in the Grade 1 E.P. Taylor on October 12 at Woodbine.

The Red Carpet Handicap has eight older fillies and mares entered for the 1 3/8-mile route. Siberian Iris (IRE) from the barn of Richard Mandella is 5-2 on the Red Carpet line off a fourth-place run last time out in the Grade 1 Rodeo Drive Stakes in September.

Winchell Thoroughbreds, Thomas Reiman, William Dickson and Deborah Easter's impressive Rags to Riches Stakes winner Finite tops a field of eight 2-year-old fillies that were entered in the 76th running of the Golden Rod going 1 1/16-miles. The Golden Rod is a “Prep Season” race on the “Road to the Kentucky Oaks” in which the Top 4 finishers will receive 10-4-2-1 points, respectively. Trained by Hall of Famer Steve Asmussen, Finite scored an impressive six-length win in the Rags to Riches under jockey Ricardo Santana Jr. The chestnut filly by Munnings broke her maiden two starts ago on the turf at Kentucky Downs. The Golden Rod will be Finite's first test running at two turns.

Sacred Life (FR) has been tabbed as the 5-2 as the favorite in the Seabiscuit Handicap having snapped a six-race losing skid recently with an allowance win at Keeneland.

Sackatoga Stables' undefeated Grade 1 winner Tiz the Law will lead a field of nine promising 2-year-olds entered in the Kentucky Jockey Club, a qualifying race on the “Road to the Kentucky Derby” in which the Top 4 finishers will receive 10-4-2-1 points, respectively. Tiz the Law, trained by veteran horseman Barclay Tagg, rallied from off the pace to score a four-length victory in the Grade 1 nearly two months ago at Belmont Park. The son of Constitution arrived at Churchill Downs on Monday afternoon and made his first appearance on the track Wednesday for a light jog and schooled at the starting gate.

The Hollywood Derby lured a quartet of highly-regarded invaders from the East Coast to take on the locally-based sophomores – the Chad Brown-trained duo of Irish-bred Digital Age and Standard Deviation, plus the Mark Casse-conditioned Uncle Bull and Mr Dumas from the barn of trainer John Ortiz. Much-improved Mo Forza, an 18-1 upset winner of the Grade 2 Twilight Derby a month ago at Santa Anita, will be seeking to prove that triumph was no fluke. Six sophomores who chased him home that afternoon are also entered Saturday.

A strong field of 11 colts and geldings are entered to compete in the Berkeley Handicap for three-year-olds and upward. A number of Southern California stars are in the Berkeley lineup this year. Ohio makes his first start on the Golden Gate Tapeta for trainer Michael McCarthy after a loss in the Grade 2 City of Hope Mile at Santa Anita on October 5. Ohio's last winners circle appearance came in March when he won the Grade 1 Frank E. Kilroe Mile.

Initially scheduled for Thursday, the Fall Highweight features an eight-horse field led by Recruiting Ready, who will look to register another victory in his stellar 5-year-old campaign. Recruiting Ready enters off a 3 ¾-length win in the Bet on Sunshine at the same distance on November 2 at Churchill Downs. The son of Algorithms has posted four wins in 10 starts since December, winning the Gravesend on December 23.

A field of 13 juveniles were entered in the Cecil B. De Mille at one mile. Stakes winner Encoder starts for trainer John Sadler off a sixth-place finish in the Breeders' Cup Juvenile Turf Sprint.

United, who came within a head of winning the Breeders' Cup Turf, returns against a field of nine challengers in the 1 ½-miles Hollywood Turf Cup. Trained by Richard Mandella, United fell just short of pulling off the upset in the Breeders' Cup Turf when he was narrowly defeated by Bricks and Mortar, the leading candidate for Horse of the Year honors.

Grade 1 winner Got Stormy, a 4-year-old daughter of Get Stormy, returns to California following a runner-up effort in the Breeders' Cup Mile. In her last three starts, Got Stormy has captured the Grade 1 Fourstardave Handicap at Saratoga in August, was second in the Grade 1 Woodbine Mile in October and the runner-up in to Uni (GB) in the Breeders' Cup Mile at Santa Anita on November 2.