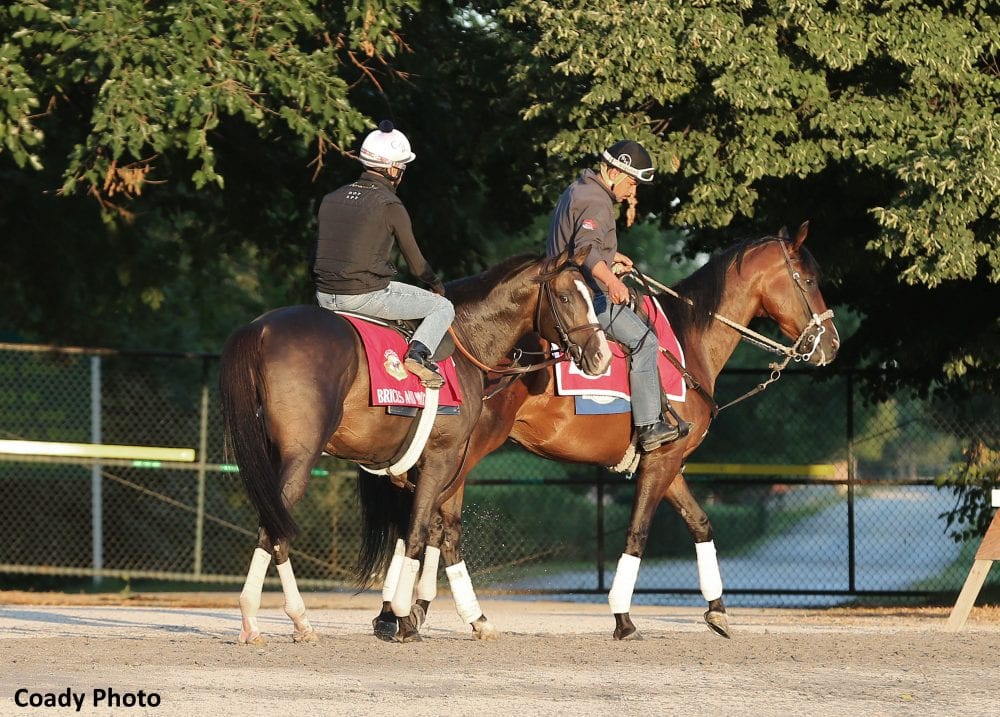 Titans of the turf will be in the spotlight this weekend as the Grade 1 Arlington Million headlines a trio of top-level grass tests at Arlington International Racecourse while the Grade 1 Fourstardave Handicap anchors Saturday's card at Saratoga Race Course.

The Fourstardave Handicap and Grade 2, $200,000 Saratoga Special will be broadcast live on NBC as part of a one-hour national show from 5 p.m. to 6 p.m.

NYRA's “Saratoga Live” programing, which began on July 11 and runs through Labor Day, airs each day of the Saratoga meet on FS2. “Saratoga Live” has been expanded for August 10 to include special coverage of both the Arlington Million and Grade 1 Secretariat Stakes, the marquee races of the annual International Festival of Racing from Arlington. Extended coverage will be broadcast live on FS2 from 6 p.m. to 7:30 p.m.

In addition to the broadcasts on FS2, all Saratoga races will air on TVG as part of their coast-to-coast racing coverage.

HRRN will be on-site at the “Spa” every Saturday throughout the 2019 season to provide exclusive radio coverage of the meet's premier stakes races. This weekend's broadcast will feature coverage of the Fourstardave, Beverly D., and Arlington Million on Sirius/XM 156 from 5:30-7:30 p.m. ET and streaming live on horseracingradio.net.

Long Weekend, an impressive five-length debut winner, will take a step up in class and distance as part of an eight-horse field of juveniles making their respective stakes debut in Saturday's Saratoga Special. Owned by B.C.W.T., Long Weekend bested a seven-horse maiden field at five furlongs in his first start on June 23 at Churchill Downs. Trainer Tom Amoss will now see the Majesticperfection colt stretch out to 6 ½ furlongs at Saratoga, where he's registered four breezes since shipping from Kentucky.

No filly or mare has ever won the Fourstardave Handicap at Saratoga Race Course, but two entries are looking to buck history when graded stakes-winner Got Stormy and Grade 1-winner Uni (GB) face eight males in Saturday's featured race. Got Stormy makes a one-week spin back after winning the De La Rose Stakes on August 3 off of two placings against graded stakes company, including a game third in the Grade 1 Jenny Wiley at Keeneland and a second in the Grade 2 Distaff Turf Mile at Churchill Downs. Uni is unbeaten in five starts at the one-mile distance and seeks a second career Grade 1 win. The daughter of More Than Ready enters the Fourstardave off of five consecutive victories and notched her first Grade 1 win in the Matriarch at Del Mar last December.

Peter Brant's Sistercharlie (IRE) captured the Beverly D. last August as part of her Eclipse Award-winning campaign for champion turf female and aims to make history as the first two-time winner of the race when she faces seven others Saturday. The 5-year-old mare capped her 2018 campaign with a victory in the Breeders' Cup Filly & Mare Turf and was nothing short of brilliant during her seasonal bow on July 13 when she bested stablemate and multiple Grade 1-winner Rushing Fall by 1 ¾-lengths in the Grade 1 Diana Stakes at Saratoga Race Course. Her trainer Chad Brown has won the Beverly D. five times, including each of the last four years, and will also saddle Grade 1-winner Competitionofideas and Thais (FR) in the this year's edition.

Fog of War, winner of the Grade 1 Summer Stakes at Woodbine last September, is part of a two-pronged entry for trainer Chad Brown in the one-mile Secretariat Stakes. The son of War Front most recently finished second in the Manila Stakes at Belmont Park on July 4 and is joined in the race by unbeaten stablemate Valid Point. Champion trainer Aidan O'Brien also has two in the Secretariat with Never No More (IRE) and Van Beethoven while Ken and Sarah Ramsey's homebred Faraway Kitten has the benefit of a win over the course having taken the Grade 3 American Derby on July 13.

Bricks and Mortar, the No. 1-ranked horse on the NTRA Top Thoroughbred Poll, puts his five-race win streak on the line against the likes of defending race winner and stablemate Robert Bruce (CHI) in the 10-horse Arlington Million field. Trained by Chad Brown, Bricks and Mortar has reeled off four graded stakes victories in 2019 including top-level triumphs in the Pegasus World Cup Turf Invitational, Old Forester Turf Classic, and Manhattan Stakes. Robert Bruce was 1 ½-lengths behind Bricks and Mortar last time out in the Manhattan and is seeking his first victory since prevailing in last year's Arlington Million. The Aidan O'Brien-trained filly Magic Wand (IRE) was second to Bricks and Mortar in the Pegasus World Cup Turf but comes in off an eleventh-place run in the Group 1 King George VI & Queen Elizabeth QIPCO Stakes at Ascot on July 27.

Stakes winner Winter Sunset seeks her first graded score when she enters the gate against 11 challengers in the 1 1/8-miles Pucker Up for 3-year-old fillies. A daughter of Tapit out of multiple Grade 1-winner Winter Memories, Winter Sunset has held her own against some of the best in her division this season. The Wayne Catalano-trained filly finished third to future Grade 1-winner Concrete Rose in both the Grade 3 Florida Oaks and Grade 3 Edgemont Stakes and was second last time out in the Grade 3 Regret Stakes at Churchill Downs on June 15.

A field of seven was entered for Saturday's Best Pal Stakes, a six-furlong sprint for 2-year-olds that serves as a stepping stone for the Grade 1, $300,000 Del Mar Futurity. Among the seven is Thanks Mr. Eidson, a Kentucky-bred son of More Than Ready who broke his maiden impressively here on July 18. Trained by Jeff Bonde and owned by Del Secco DCS Racing, Thanks Mr. Eidson led virtually from the start and pulled away to a 9 ½-length victory under Norberto Arroyo, Jr.

Special Forces is set to contest his second straight Grade 3 race when he goes postward in the Seagram Cup Stakes. Trained by Kevin Attard who co-owns with Soli Mehta, Special Forces was making his added-money debut in the Grade 3 Dominion Day Stakes on June 30 at Woodbine. Under Alan Garcia, the Kentucky-bred, sent on his way as the 6-5 favorite, rated off the pace in the 1 ¼-mile main track tilt, launched a determined stretch drive, but couldn't collar Are You Kidding Me, finishing a half-length behind the Roger Attfield trainee, whom he'll meet once again on Sunday.

A field of nine that features the 2-3 finishers from last month's Great Lady M Stakes at Los Alamitos was entered for the 48th running of the Rancho Bernardo Handicap. Anonymity and Exuberance chased home Marley's Freedom in the 6 ½-furlong Grade 2 Great Lady M and will be going the same distance on the more traditionally configured oval here on Sunday. Anonymity, on-the-board in all eight of her career starts for LNJ Foxwoods Stable and trainer Richard Mandella, was second to Yuvetsi in last year's Rancho Bernardo and went on to finish third in the Breeders' Cup Filly & Mare Sprint.

Anyportinastorm drew the No. 8 post and is the 8-5 morning-line favorite for the 84th renewal of the Northwest's most prestigious race. The Mile is the centerpiece of the inaugural Championship Sunday, featuring four stakes worth an aggregate $350,000 in purses. A 5-year-old Florida-bred by City Zip, Anyportinastorm recorded meet-fastest times at 6 furlongs (1:07.54) and 6 1/2 furlongs (1:14.35) while airing in the Governor's Stakes and Budweiser Stakes but hasn't raced since a 6 ½-length victory in the latter June 30.