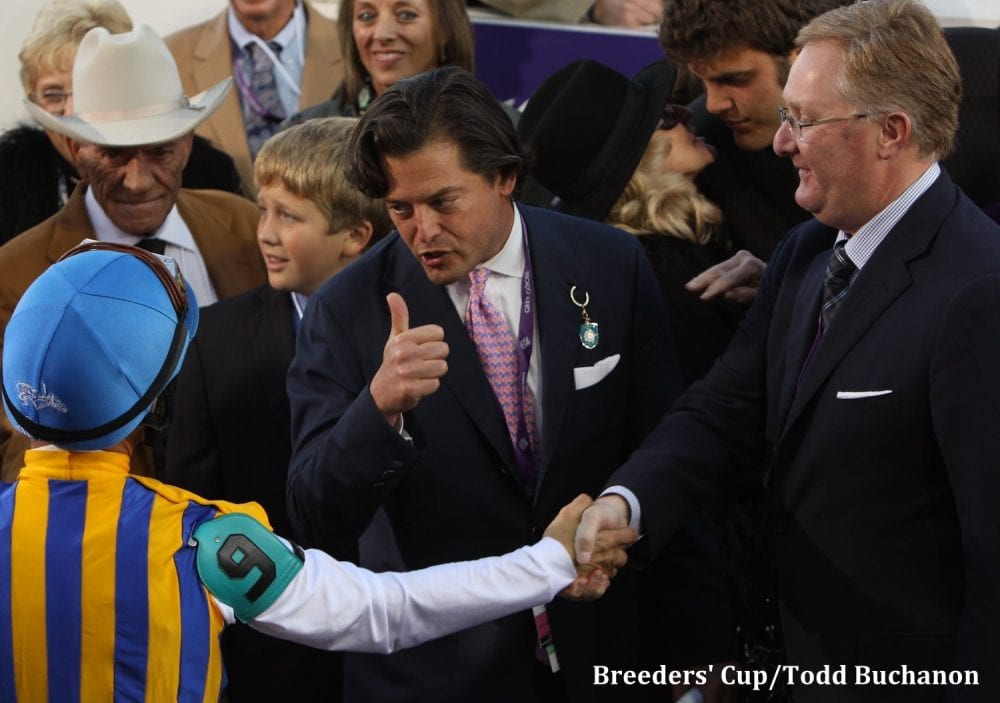 George Bolton, who grew up near Pimlico Race Course in Baltimore, is the chief investment officer and portfolio manager of WestEnd Capital Management in San Francisco. His father and grandfather raced steeplechase horses in the Mid-Atlantic, but Bolton became a Thoroughbred owner “on the flat” nearly 30 years ago when he became partners on a horse with Bill Farish, a friend from college and the son of Lane's End owner William S. Farish.

Bolton races most of his horses in partnership. Among the many top runners Bolton has campaigned is two-time Horse of the Year Curlin, purchased in partnership with the late Jess Jackson and Satish Sanan after the Smart Strike colt broke his maiden early in his 3-year-old campaign.

We asked him five questions:

Who was the first horse you ever owned?
I am a lucky person to have gone to the University of Virginia with Bill Farish, whose father, Ambassador William S. Farish, was building Lane's End Farm at the same time. Later, they both brought me in on a Miswaki filly named Exotic Moves and we sold her after she won three races for a clean “double” and I was hooked.

The excitement of campaigning that filly led me to understand that Thoroughbred ownership is much more than the race itself! In fact I found hanging out with my trainers at the racetrack “backside” in the mornings and with my agent, John Moynihan, at the sales, were easily as much fun as an afternoon at the races. This is a way of life if you want it.

How did you get started with WestEnd Capital Management and what was your first job?
I started working at investment banking firm Alex Brown and Sons in the summer of 1982 and become hooked on the stock market. I spent 20 years in their San Francisco office and left after Deutsche Bank bought the firm in the late 1990s. That led me to go to the active investment company, WestEnd Capital Management, where I remain busy today.

Like my horse operation, I buy stakes in companies that I think will lead the stock market for my family and friends and I sell my losers – like horses – quickly.

What do you love most about horse racing?
First, I grew up riding ponies on my parents farm in Maryland and I love horses and ponies themselves – despite being dumped many times! Secondly, I get to root for my 2-year-olds every spring, which they say prevents depression – and, yes, I think I can win the Kentucky Derby with one of them.

Importantly now with the boom in racing festivals – Dubai, Royal Ascot, the Melbourne Cup and others – a horse can take you around the world in style. How surreal it was to receive the King's Stand Trophy at Royal Ascot last June from Prince William and the Duchess of Cambridge for Lady Aurelia's victory.

What is the main reason you co-own with others?
Easy, I get more horses under my co-ownership that I would have been stretched to buy alone. I also love chatting with my partners or, better yet, dreaming with them of what could be. Looking in the mirror and talking about your own horses gets old!

If you were horse racing commissioner for a day, what one change would you make?
I would make attendance free and do anything possible to market to the under 40-year-olds as they do at Del Mar with concerts after the races. The excitement of a great stretch run between two horses rivals the energy of any other sport, and if you own that horse, it is that excitement on steroids!!!