Lost And Found Presented By Horseware: Legendary Crump Still In Love With Horses 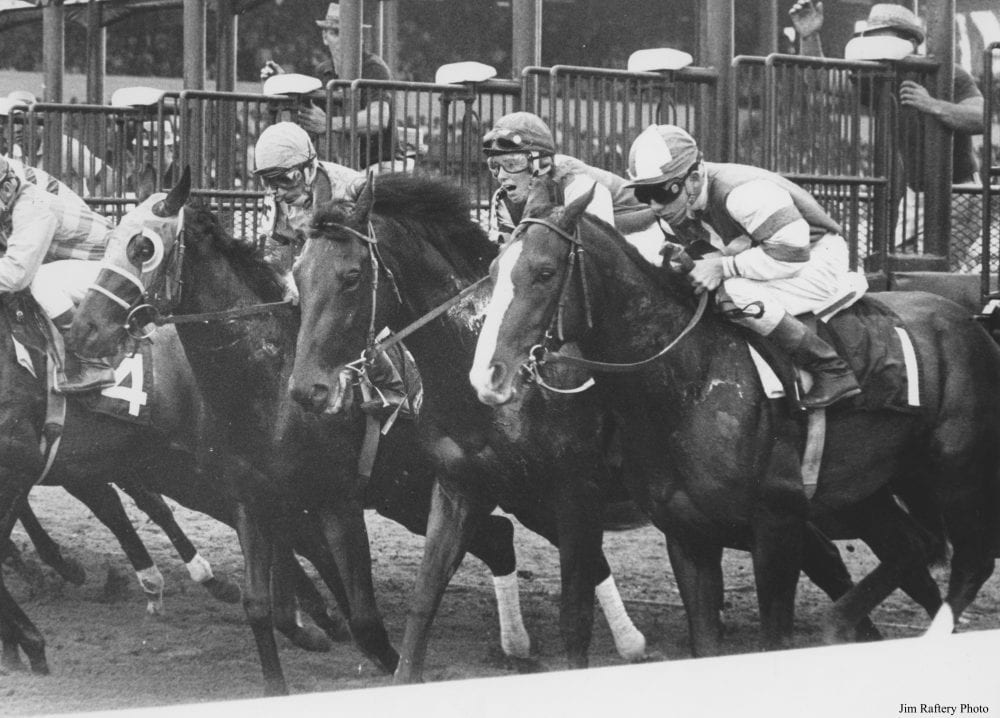 Diane Crump, second from the rail, breaks from the gate at Hialeah on Feb. 7, 1969

The name Diane Crump carried celebrity status a half-century ago and now is known for brokering sales of sport horses including off-track Thoroughbreds. Doing business in Linden, Va., as Diane Crump Equine Sales, she describes her job as similar to being a real estate agent who acts as agent between buyers and sellers without owning the inventory.

“The idea had been brewing around in my head for a while to find horses for people,” she said. “I thought with the name recognition, it just might work. I would say that quite a few of my customers know who I am but at this point in time, many just know my website”

The moniker made headlines at Hialeah Park in south Florida on February 7, 1969 when Crump became the first woman to ride in a pari-mutuel race. The event attracted so much attention that she had a police escort to the saddling paddock amid cheers from supporters and sexist shouts from naysayers.

“I never felt like a pioneer or trailblazer,” she said. “I just wanted to live my dream and I most certainly did.”

The dream began in early childhood with a carnival pony ride in her native Connecticut. Crump was smitten and her parents subsequently sent her for riding lessons at a local stable. When Crump was in middle school, the family moved to the Tampa area where she continued riding and began working at a local farm. Unbeknownst to her, the farm horses were Thoroughbreds that led the way to finding work as an exercise rider at Tampa Bay Downs.

From winner's circle to cyberspace

After her milestone ride, Crump closed 1969 with 24 wins from 249 mounts. In 1970, she reached another milestone by becoming the first of only six women to ride in the Kentucky Derby when she finished 15th on Fathom. From there her life was normal, if a racetrack career can be considered normal. Crump worked side by side with her trainer husband, raised a daughter who spent many hours at the barn, traveled the seasonal racing circuits, got divorced, launched her own training career and sporadically rode races until 1999.

Crump is escorted through the paddock at Hialeah Park by security on Feb. 7, 1969

She then left the racetrack routine she cherished and went to Virginia to assist her mother who was in failing health.

“I've never done anything except work with horses my entire life and I needed to stay in one place and make a living without riding anymore,” she said. “My (agent) business was slowly coming into existence by the fall of 1999.”

In an era when the Internet was relatively new, Diane and her mother developed a website to promote her sport horse project.

“My mother was very creative and artistic although not at all tech savvy,” she said. “With lots of help, we bought a computer and she learned to use it. She then went about designing my website as we searched for someone in that field to bring it to fruition.”

At the same time, Crump explored the finer points of horse shows involving jumping and dressage and other equine activities such as foxhunting.

“Through few dear friends that knew about show horses and sport horses, I started learning all of these different disciplines,” she said. “One thing led to another and I met people that sold show horses for a living. When I mentioned advertising them on my website they thought it was a great idea. I realized that much of the sales were done by an agent, so it was the perfect plan.”

Based about 25 miles from the equestrian-rich communities of Middleburg and Upperville, Crump's daily routine mimics that of a real estate as she takes clients to see horses and scouts prospects for her website listings.

“I meet people at different farms by appointment to see specific horses that they have asked about,” she said. “From there they follow me to other farms and we watch the horses go. If they like them, then they ride each of them to try to find the perfect match. On days that I don't have customers, I could possibly be out looking at the horses that are for sale. I take pictures and do videos if needed of the horses that will be posted on my website.”

In addition to visiting with her daughter, who is a school teacher, son-in-law and their three children, Crump's leisure time is spent hiking the scenic trails of northern Virginia and taking her three miniature Dachshunds to visit hospital patients.

Crump, shown in 2014 surrounded by her loyal four-legged friends

“It's a great program and I can see how much comfort and happiness the dogs bring to people,” she said. “It brings me a tremendous amount of satisfaction. I love my dogs and I love helping people.”

Crump also uses the word “love” to describe her past at the racetrack. She no longer rides at all because of the residual effects of her injuries but she has no regrets.

“I loved everything I did at the racetrack; it was my life for 35 years,” she said. “When I left, I never looked back. I knew it was time for the next phase. The horses that gave me their heart when they ran was like no other feeling. The amazing people that I worked with and met along the way are probably too numerous to mention. The good times and horses are stamped on my heart for all time.”