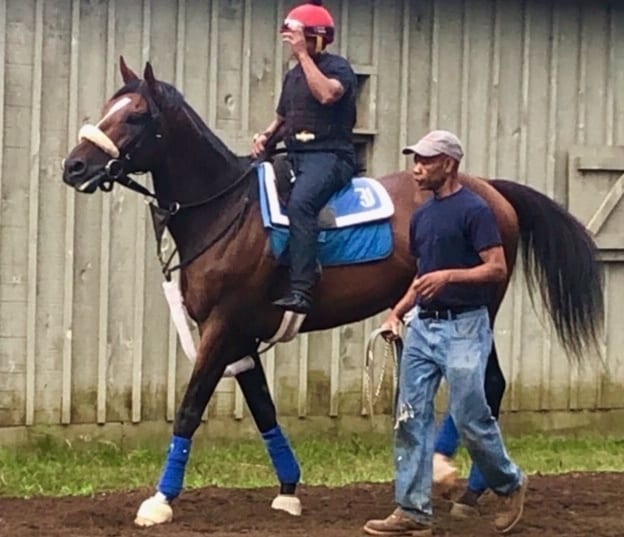 Junior McFarlane walks alongside one of his charges

Junior McFarlane wanted to work at the racetrack so badly that he was willing to say pretty much anything to gain an opportunity in the early 1990's.

After handling a series of odd jobs that did not amount to much, the avid racegoer decided his best hope was to seek an interview with Allen Jerkens. They had briefly spoken once before and he viewed the legendary trainer, known as the “Giant Killer” for his penchant for pulling upsets, as his best hope.

He arrived at Belmont Park's stable gate and asked if he might meet with Jerkens. Sure enough, the conditioner also known as “The Chief” pulled up to the gate and McFarlane told him of his desire to work at his barn in any capacity whatsoever.

When Jerkens asked McFarlane about his level of experience, the young man launched into a bit about working for highly-respected Ron McAnally in California. Jerkens looked McFarlane up and down with incredulity.

“I told him a bunch of lies,” McFarlane said. “He figured it out right off the top.”

As much as Jerkens was not buying what the job applicant was selling, he also discerned that this was someone who badly wanted to work for him. McFarlane was told to report early the next morning, beginning an association with the Jerkens family that continues to reap rewards for both parties in its fourth decade.

According to McFarlane, Allen not only mentored him but took on the role of “second father.” He left Allen in 1997 to work for Jimmy, Allen's son, when Jimmy struck out on his own. Jimmy had been a top assistant to his father.

McFarlane has been entrusted with the care of virtually all of Jimmy's finest horses since then as the son works to carry on one of the great names in the sport's history. Allen, who famously sent out Onion to shock Secretariat in the 1973 Whitney Handicap, died on March 18, 2015.

Jimmy will always be grateful for the day McFarlane sought out his father.

“It's always good to have a good groom,” he said. “It's a big part of the process of getting them over there the best way you can. They've got to be trained right and fed right, their legs have to be taken care of closely. Good general care is a big part of it, no question.”

From the moment McFarlane arrives at the barn, anywhere from 4 to 4:30 a.m., it is evident that he views his work as more than a job. His horses are nickering for him – and he is equally happy to see them.

“I give each of them a hug, a little rub, a scratch and a candy,” he said. “They look forward to that, you know what I mean?”

He grew up in New York but speaks with a delightful accent that evokes his parents' Jamaican roots. McFarlane prides himself on his ability to connect with all of his charges.

“It's just like they are talking to you in their language,” he said. “That's just what it is.”

Many grooms opt to tie up their horses as they work around them. McFarlane does not.

“I just let them roam in the stall and trust in the connection with them,” he said. “It works out. Horses tend to love that because they are free. They know you love them and are not going to hurt them. They get to trust you and you trust them, too.”

McFarlane, 54, sounds very much like a teacher working to keep children in line.

“You compliment them when they do the right thing,” he said. “If they do something bad, you shout a little louder. They will come around. They are like people.”

McFarlane's only child, Kayla, is studying to be a nurse. She is 23. He stands out from the backstretch crowd in his unfailing loyalty to Jerkens. Like many modest operations, Jerkens struggles to retain quality help.

“There are three or four trainers who have all the horses and they can afford to pay a little better,” Jerkens noted. “It doesn't take much for them to pick up and go to work for these guys. It's tough to keep good help around.”

He knows he can count on McFarlane — just as his father did.

“No matter what, you don't want to leave,” McFarlane said. “These people are like family to me. After they've taught me everything and they've been so good to me, it wouldn't feel good (to leave).”

McFarlane has no intention of retiring. Not any time soon. Not ever.

“If God keeps me strong enough to do it, I'll do it for the rest of my life,” he said.

He looks forward to arriving every morning at the Jerkens barn, candy and hugs at the ready.