Kirkpatrick & Co. Presents In Their Care: ‘I Wouldn’t Trade This For A Doctor’s Job’ 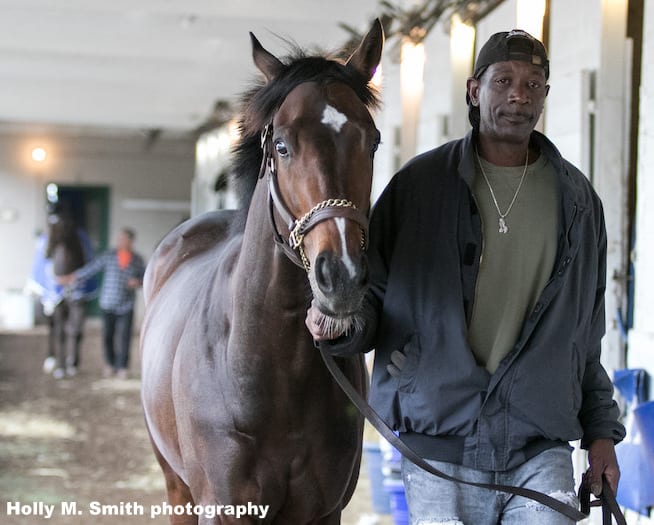 Earl Wade had just graduated from high school in Louisville in 1982. He was 18 years old, an age when many young people are carefree.

He had already fathered two children, and he urgently needed income. His mother, Alma, who cleaned bathrooms and handled other maintenance chores at Churchill Downs, found him a position as a hotwalker at the track.

The teenager knew little of the danger that was part of the job until he was walking the shedrow one morning and something spooked the horse he was leading. The horse reared and one of its hooves crashed into Wade's shoulder as it descended, knocking him to the ground.

It was as if someone had taken Wade's arm and ripped it from the socket. He had never experienced such pain; he never wanted to endure it again.

“It was scary and I wanted to quit that day,” Wade said. “But the girl behind me said, 'Don't quit. Don't quit. Because we okay.' “


He does not know the name of the co-worker who persuaded him to stay. He is forever grateful to her. He remained a hotwalker and then learned to groom. He developed a career that, from his perspective, has been much better than okay for the last 36 years.

“I wouldn't trade this for a doctor's job,” he said during a recent interview.

He made that comment even though he paid a steep price for work he grew to love. He struggles with asthma and had just removed a surgical mask he frequently wears to keep dust from irritating his lungs as he rakes and goes about other chores at the barn of Chris Hartman, the latest in a considerable list of trainers that have employed him. He estimated he has been with approximately 20 different operations, often shifting allegiances when the opportunity for better pay arose.

His back pain seemingly worsens every year. He said he takes ibuprofen every morning before he leaves his dorm room at Churchill Downs to help him meet the physical demands placed on him. He remains a hotwalker and takes on other assignments. Grooms are required to crouch close to the ground as they tend to the legs and feet of their horses; his bad back no longer allows him to do that regularly.

Wade lives in a dormitory at Churchill Downs with Edward, a man whose surname he does not know, to eliminate rent from his expenses. The space is cramped.

“The rooms are pretty small. It's not built for two guys. We've got to make it work,” Wade said.

They both need additional storage space they cannot possibly afford.

“I've got a lot of stuff. My roommate has got 17 years' worth of stuff,” Wade said. “When we go past each other, we can't just walk past each other. We've got to scoot.”

He contracted his body as much as possible and took baby steps sideways to show how they must maneuver past each other. He did so only to demonstrate a point, not to complain, for he greets most of life with a smile. 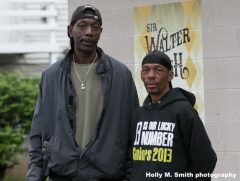 Co-worker Rodney Brown, known throughout the track as “Sweet Pea,” grew up with Wade in Louisville. He described him as a “good gentleman.”

Turpin has come to understand her boyfriend's passion for horses.

“He's there all day, every day,” she said. “He loves the horses. He watches over them.”

Wade cannot remember his last day off. He lamented missing a grandson's recent baseball game, but said he accepts such sacrifices as part of the job. One of his nieces visited the barn not long ago. She was initially afraid of horses. Before she left, she braided the tail of one of them.

Wade relies on a bicycle for transportation after several misadventures with a moped.

“If the road slick, can't use it. The guy who sold it to me never told me that,” he said. “I never know you can't ride these things in the wetness. They don't stop.”

The third crash totaled the moped. He said he started putting aside money for a car. It may be some time before he can afford something reliable.

His greatest pleasures come from his family and racing. He can hear the roar of the crowd when he watches the Kentucky Derby on television on the backside. Although he has never tended to a champion, his face brightens as he discusses the thrill of playing a role in a horse's victory.

“It feels like you just had a newborn baby,” said Wade, the “good gentleman” behind the mask.

This entry was posted in In Their Care, NL Article, People and tagged backstretch workers, churchill downs, Earl Wade, grooms, hotwalkers, In Their Care, tom pedulla by Tom Pedulla. Bookmark the permalink.
Twitter