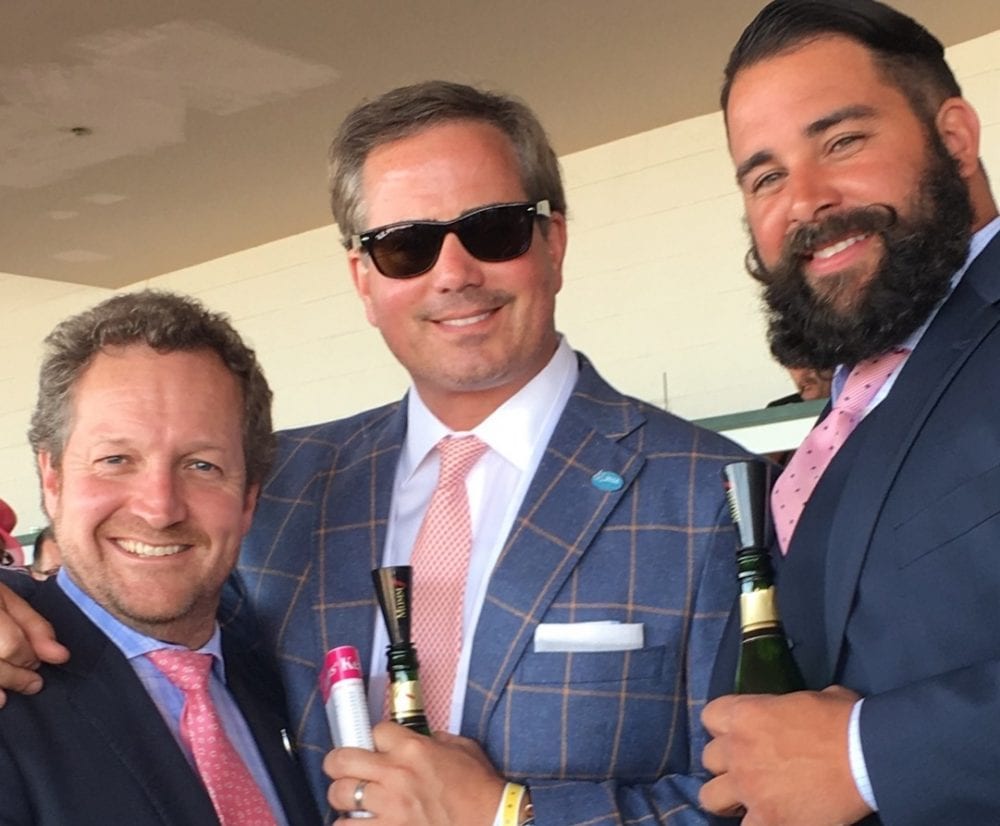 Best friends since their childhood in rural Tennessee, Clint Joiner and Tyler Alexander are on the ride of a lifetime with Kentucky Derby hopeful Plus Que Parfait (a phrase meaning the past perfect verb form in French, literally translated as “more than perfect”).

Alexander's wife videoed him watching the ridgling's UAE Derby victory: he was “helping” jockey Jose Ortiz ride the colt all the way to the wire. Alexander's euphoria is palpable; a big win like this would be a triumph for any breeder, but it is especially sweet because Plus Que Parfait is just the second foal bred under the friends' banner of Calloway Stable.

Joiner, whose equine experience included wrangling horses on a Colorado dude ranch, has been involved with Thoroughbred racing for nearly 10 years. It took him a while to convince his friend to join him, however.

Alexander grew up as a fourth-generation horseman in the Quarter Horse and Tennessee Walking Horse industries, but he was eventually seduced by the thrill of racing.

“You just don't get that excitement anywhere else,” Alexander said.


In 2014, the fledgling Calloway partnership purchased its first broodmare for $20,000 at the Keeneland November sale: Belvedera (Awesome Again) is a half-sister to Canadian Oaks winner Touch Dial.

She was in foal to Breeders' Cup Classic winner Fort Larned and also sold with a season back to Point of Entry. Bloodstock agent Josh Stevens advised the purchase, and in 2017, the ridgling by Point of Entry sold for $135,000 as a yearling to trainer Brendan Walsh on behalf of his Dubai-based ownership group.

“Some people would say, 'Oh no, why would you sell the mare when she's now worth six figures?'” said Alexander. “We sold the mare for a reason, to be able to cash flow to the next level.”

A young Clint Joiner is far left, with friend and current partner Tyler Alexander to his right

Belvedera's sale funded the purchase of a colt by Shanghai Bobby, which six months later sold for $180,000.

“We started this with a small budget,” Alexander said. “Our goals were to stay in the black, find smart people to be involved with and to see if we can have a little fun with it. It doesn't have to be a rich man's game if you listen to those smart people.”

Joiner had a chance meeting with Alan Porter of TrueNicks near the beginning of his racing industry experience, and Porter was his first call when starting Calloway. Porter recommended Stevens as a talented young bloodstock agent.

“He now has the top two points-earners on the Derby leaderboard,” Joiner said proudly, explaining that Stevens also picked out Louisiana Derby winner By My Standards. “He has a true passion for the industry, and he's become a good friend.”

Originally the Calloway operation was based on a family friend's farm in Western Kentucky, but Plus Que Parfait was foaled in Lexington at Oak Lodge because it “made more sense” to be closer to the stallions, explained Alexander.

Currently Calloway is involved in several pinhooking ventures and has a couple racehorses with trainer Grant Forster, but the friends hope to be back in the breeding arm of the business soon.

“Each of our sales has created a new opportunity, which allows us to spring forward to the next level,” said Alexander.

As for Plus Que Parfait, the ridgling will be able to hear his breeders cheering him home if he makes it to the first Saturday in May. Alexander and Joiner will attend the “Team Forster” Derby party just outside Churchill Downs, which Alexander calls the best Derby party in Louisville.

Even if Plus Que Parfait doesn't enter the Kentucky Derby starting gate, his breeders know their experience with him is incredibly special.

“What's really amazing is how this horse has touched all corners of the globe,” said Joiner. “His Dubai-based owners are originally from Russia, his name is French, his trainer is Irish, his jockey is from Puerto Rico, and his breeders are a couple of rednecks from Tennessee!”