Copies of sales catalogues from early auctions of Runnymede stock

On a recent wintertime walk alongside a paddock of mares, Brutus Clay gestured to a group of blue ash trees on his Runnymede Farm near Paris, Ky. The sturdy specimens, like many things on the property, are older than the state they reside in, having sprouted three or four centuries ago. As the latest in a long line of Clays to oversee the development of Thoroughbreds on the property, he knows a little something about growing over the course of generations.

Runnymede is widely recognized as the oldest Thoroughbred farm in the state continuously operated by one family. Officially founded in 1867, Runnymede sits on land acquired by Green Clay, a surveyor who was given a portion of the land he surveyed, and consequently owned some 40,000 to 50,000 acres in central Kentucky at the time of his death in the 1820s. (For the locals, Clay County is actually named for him, not, as many may assume, for Henry Clay.) Two of Green's sons, Cassius and Brutus (the original Brutus, one of several Brutus Clays through the years) became involved in importing and breeding some of the country's first Thoroughbreds, hence the farm's establishment.

As the current in a long line of Clays to manage Runnymede, the present Brutus recognizes that he is just the present chapter in the story of the farm and the family.

“The reality is I'm just the spokesperson, but it's a family affair,” said Clay. “It's certainly a privilege and you take it seriously and want to do right for the family, and especially for my father [Catesby Clay].”

The farm's sometimes sharply rolling hills have often been – perhaps moreso than larger operations – a family homeplace not just for its humans (who still live there, in a plantation house constructed in 1832), but for its horses. Thanks in part to the Clays' interest in importing horses and in a partnership with neighboring Raceland farm, Runnymede stood or bred the year's top sire 11 times between 1883 and 1919. Billet (GB) was the original, producing such notable horses as Sir Dixon, Belle of Runnymede, Miss Woodford, and Raceland (the horse), despite a relatively small book. The farm bred top sires Hanover, Ben Brush (who sired leading sire Broomstick), and stood Star Shoot (GB).

“I always say that it's the female lines that are so important, and I really believe that,” said Clay. “But then I look at the farm back when they had Billet and were breeding – you could attribute [their success] to a great stallion. Back then, it's not like they had great mares coming from all over the place to visit that stallion.”

Runnymede's model had always been to sell much of its produce, and the farm could boast an enormous number of stakes winners in its early history; Runnymede-breds won the Alabama six times, the Clark six times, the Kentucky Derby twice, the Spinaway three times, and the Travers four times, all before 1920.

The farm has had its ups and downs, like any other that has stood up through the decades. After a period of strength in which Runnymede bred so many horses that it hosted public auctions in partnership with one or two other farms, the program fell on tougher times beginning in the early 1910s. Ezekiel Clay (grandson of Green) sold much of the family's stock in 1912 and '13, and another 100 head went in a dispersal after the Great Depression. Brutus Clay estimates Runnymede housed just six mares by the 1940s.

With the sale of those horses went at least one important chance for success. Star Shoot was one of several horses who went to John Madden's Hamburg Place, and at that time he had yet to sire Triple Crown winner Sir Barton. The loss of much of Runnymede breeding stock meant that any relatives of those stakes winners went out of the family's hands. Female families of Billet, Hindoo, Hanover, Miss Woodford … all gone.

But like one of its famed ash trees after a lightning strike, Runnymede grew back in a slightly new direction. The farm was revived in the mid-1930s by John Camden, who married the widow of Brutus J. Clay (that Brutus was Ezekiel's son) with the philosophy of becoming a smaller, boutique operation. 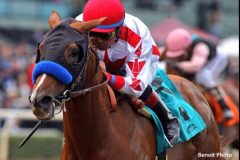 Clay hopes Runnymede is on the verge of another successful era. He was encouraged when Collected came home the winner of the Grade 3 Sham Stakes at Santa Anita Park earlier this month. The 3-year-old is trained by Bob Baffert for Speedway Stable LLC, and was bred by Runnymede in partnership with Peter Callahan. Like many Runnymede stakes winners, Collected was sold as a yearling at Keeneland September for $150,000. He is by City Zip and out of Helena Bay (GB), a homebred for Runnymede. Helena Bay's dam is Josette (IRE), who also gave the farm the undefeated 3-year-old filly Koala Queen (by Lonhro [Aus]), in training with Arnaud Delacour, and Cinnamon Lass, a Conduit (IRE) daughter the farm sold as a yearling and bought back at age five from the Keeneland January auction.

Josette's line is one of several female families running through the barns at Runnymede. Several members of the broodmare band trace back to Kazadancoa, a Green Dancer daughter who produced 13 named foals and seven winners. Among Kazadancoa's offspring were graded stakes winners Changing Ways, Jacorda, and Jacorda's Devi; her unraced daughter Royal Run gave Runnymede Palace Weekend, who produced Group 1 winner Palace Episode. Kazadancoa's last foal was Sacre Coeur, who is the mother of both Bizzy Caroline and Lady Eli. Palace Weekend, Sacre Coeur, and Bizzy Caroline are all part of the Runnymede herd. Palace Weekend's daughters Lady Simpson and With Your Spirit are also in the farm's arsenal of 27 broodmares.

With this kind of history behind him, both human and equine, Clay feels pressured to succeed –especially given how relatively small the current Runnymede program is.

“When I think about it, the way we conduct ourselves, how we raise our horses and care for our horses and our people, it's not only my reputation I have on the line,” said Clay. “I can't just pick up and move.”

Recent history would suggest that Runnymede's reputation is more than safe, and perhaps that the farm is primed for another period of success. The farm can claim relationships to Grade 1 winners Lady Eli, Undrafted, Awesome Gem, Divine Park, Jaycito, Palace Episode, Marylebone, and Agnes Digital since 2000. Clay has his fingers crossed that Collected, who earned ten points toward a Kentucky Derby start, will soon be added to the list.