Bloodlines: Flatter Will Get You… A 2-Year-Old Canadian Champion? 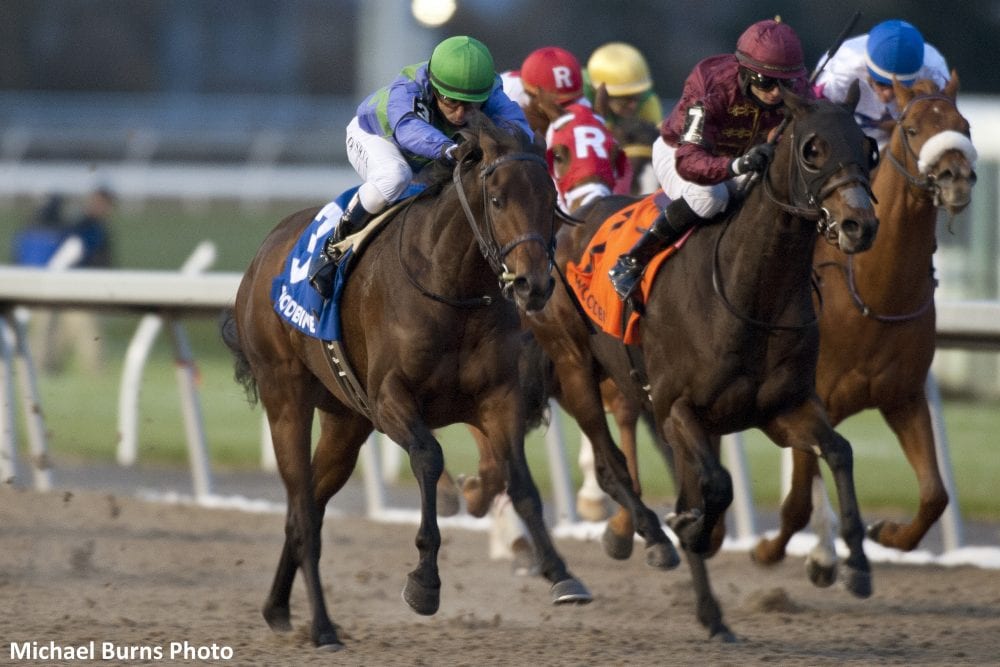 Could the hulking Claiborne Farm stallion Flatter, the sire of 50 stakes winners to date and a half-dozen winners of $1 million or more, be having a better year? Yes, but only a bit. If the stallion's 2017 champion 3-year-old star West Coast had lived up to half-expectations, the massive son of A.P. Indy would really be flying high.

In 2017, West Coast came on strong during the second half of the year to win the Eclipse Award as leading 3-year-old colt, and that grand-looking athlete's much-abbreviated 2018 season of racing – four races in Florida, UAE, California, and Kentucky – was one of the disappointments of the racing year.

Beginning his 2018 season with a good second in the Pegasus to Gun Runner, West Coast ran a respectable race in the Dubai World Cup to finish second behind Thunder Snow, then was unraced for six months. Returning in the Grade 1 Awesome Again Stakes at Santa Anita, West Coast ran another creditable race to finish second by 2 ¼ lengths to divisional leader Accelerate. The colt's final start came in the G1 Breeders' Cup Classic, which resulted in a surprising 7th place finish at Churchill Downs after pressing the strong pace of Mendelssohn.

But with eight stakes winners this year, Flatter did not depend solely on West Coast and currently ranks 10th among all North American stallions on the general sire list. One of the features of Flatter's sire record this year is a quintet of stakes juveniles, including Stifling, winner of the My Dear Stakes at Woodbine, and Cassies Dreamer, third in both the G1 Spinaway and G1 Frizette. Both are out of mares by leading sire War Front.


And on Nov. 18, Avie's Flatter ran his juvenile record to three victories from four starts with a success in the Coronation Futurity at Woodbine. Winner of the Cup and Saucer Stakes on Oct. 7, Avie's Flatter clearly relishes a mile and more, and that is entirely appropriate to his pedigree, as both his grandsires won the Belmont Stakes. A.P. Indy (Seattle Slew) won the longest classic in 1992, as part of his 3-year-old campaign that made him champion of his division, as well as Horse of the Year following a victory in the Breeders' Cup Classic. Empire Maker (Unbridled) won the Belmont in 2003 but lost the Eclipse to fan favorite Funny Cide (Distorted Humor), winner of the Kentucky Derby and Preakness.

Their descendant Avie's Flatter has the potential to play a role in the 2019 classics, either in the States or Canada.

Bred in Ontario by the Tall Oaks Farm of Ivan Dalos, Avie's Flatter races in the name of his breeder.

David Anderson of Anderson Farms and breeder of 2018 Queen's Plate winner Wonder Gadot commented on his fellow breeder. He said, “Mr. Dalos is one of Canada's premier breeders. Year in and year out, he is breeding some of the country's best Thoroughbreds. Avie's Flatter stems from one of Tall Oaks good female families, and his win in the Coronation Futurity was very impressive. That should definitely cement him as the champion 2-year-old colt in Canada and likely the winter book favorite for the Queen's Plate.”

The pro-tem champion is the fourth foal and second stakes winner out of his young dam, the Empire Maker mare Avie's Empire. The mare had previously produced Avie's Mineshaft (Mineshaft), winner of the Wonder Where Stakes; ran second in the Princess Elizabeth, Bison City, and Carotene Stakes; and was third in the Fury Stakes.

Their dam is the unraced Avie's Empire, and she was bred at Tall Oaks as well. She's a half-sister to stakes winners Avie's Tale (Tale of the Cat; Blushing K.D. Handicap) and Avie's Quality (Elusive Quality; Display Stakes).

Their dam was the Lord Avie mare Fly for Avie, a graded stakes winner of more than a half-million who became one of the foundation mares of the breeding operation at Tall Oaks. The mare's most significant achievement on the racecourse was a victory in the G1 E.P. Taylor Stakes in 2000 when the mare was a 5-year-old.

Fly for Avie was the only foal of her dam, the Arctic Tern mare Fly for Baby, that raced in the States. Bred and raced by Landon Knight, Fly for Baby was sold to Indian interests after producing her first foal, and in her new home, Fly for Baby produced three stakes winners, including Acrobat (Chief's Crown), winner of the Poonawalla Trophy and the Knock Out Million, and Allaire (Razeen), winner of the Kingfisher Derby and the Bangalore Oaks.

But from Fly for Baby's single American acorn, there is now a forest of Canadian tall oaks.