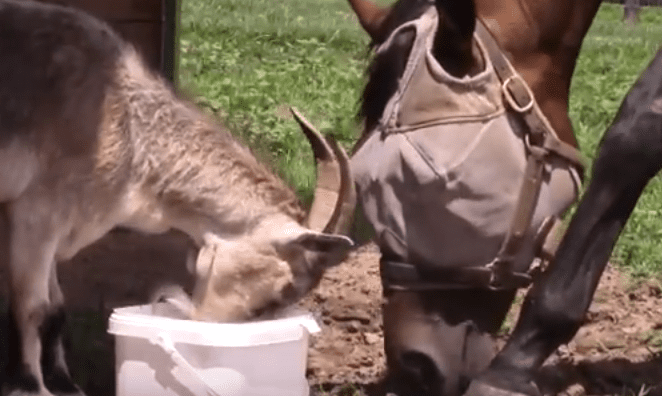 Eldaafer shares a snack with Google

This week, the Paulick Report launches a light-hearted weekly series profiling the companion animals that keep horses and humans happy and productive at the racetrack or on the farm. Some are close friends to Thoroughbreds, others provide natural pest control, and some are largely decorative. We'll take a look at the goats, dogs, and many barn cats that help the racing world go round. If you have suggestions for our next Barn Buddies profile, email features editor Natalie Voss at [email protected]

Old Friends Farm Manager Tim Wilson was pleased when he heard that multiple graded stakes winner and Breeders' Cup Marathon winner Eldaafer was going to be retired to Old Friends. When he heard that the gelding came with two four-legged companions, however, he was a little taken aback.

“We're not set up for goats. This isn't a goat farm,” said Wilson. “I talked to Michael and his wife Diane said, 'Oh those goats are so cute!' and I realized they were going to stay.”

But Wilson quickly realized that Eldaafer doesn't go anywhere without his goats, named Yahoo and Google. According to Old Friends president and founder Michael Blowen, racetrack lore has it that Google was Eldaafer's first companion in trainer Diane Morici's barn while he was in Florida. When he made a move north to run in the Grade 3 Turfway Park Championship, Google was left behind. Eldaafer was inconsolable, refusing to train and pacing his stall, screaming for his buddy. When the Kentucky barn staff called their colleagues in Florida for advice, they were told the goat was doing the same thing.

So, Google was put on a plane, flown to Cincinnati, and driven to Turfway Park. Three days later, Eldaafer came home a half-length in front in the $100,000 race, and Morici's staff realized they couldn't separate the two again. In an interview with ESPN, Blowen speculated that Yahoo was acquired as a back-up option.

Wilson's concerns about keeping goats at Old Friends proved to be valid ones, as Google (the trouble-maker of the pair) was a fan of wiggling through the four-board fencing in Eldaafer's paddock and going for jaunts around the farm. (Yahoo, the mild-mannered benchwarmer, would usually watch the hijinks rather than participate.) Eldaafer would go ballistic, perhaps worrying that Google might opt to make fellow retirees Silver Charm or Game On Dude his new wingman.

The trio now lives in a paddock with mesh fencing, and all four corners are stabilized with boards along the bottom to prevent Google from digging out. So far, Wilson said, he's been able to keep the escape artist contained. Yahoo and Google also have a custom house built into Eldaafer's run-in shed, where they are enclosed at night to protect them from coyotes. Eldaafer can peek over the top of one wall of the enclosure in case he gets worried about them, though Wilson said he seems to understand the routine. Yahoo and Google earn their keep by greeting tour groups (when they feel like it.)

And farm manager Wilson has learned to go with the flow — he's resigned that as long as Eldaafer wants his goats, he's having his goats. After all, the multiple graded stakes winner of more than $1 million has earned it.